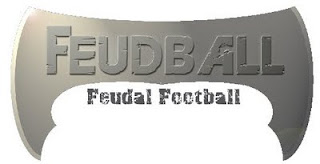 
Inspired by movies such as 'The Longest Yard', 'Mean Machine', 'Salute of the Jugger' and 'Rollerball', the Feudball Novel, set in an alternate world, is written around a variety of characters the average fantasy reader can easily relate to. Using gritty detail and realism combined with wry humor, the tale takes place in the dawn of the industrial era with steam powered machinery beginning to be developed. The main role is a prisoner who ends up in a gaol that subsequently forms a Feudball team. The team of prisoners successfully play their way to the country's best tournament.
Plot synopsisOur “hero” is Alexander Bathgate, a frustrated accountant, who decides to spice up his dull life with some creative bookkeeping. He was caught by his employer in a tax audit, and promptly jailed and convicted of “stealing the King's income”. While being transferred to a maximum security facility, the transport is attacked and captured by pirates. Alex is spared the long walk on the short plank, and ends up becoming a general dogsbody aboard the pirate vessel.In his short time as a pirate, he reacquaints himself with an old passion of his – Feudball, albeit in a nautical version known as Sand Brawl. He is recaptured by the Brython navy and is mistaken for a royal prisoner. He is promptly transported to a private Brython prison (Flagstaff gaol) to await payment of a ransom. The other pirates manage to escape without their vessel.The general manager of the Flagstaff gaol is a retired Feudball referee from the mainland who desires to have a Feudball team succeed in the Brython Cup with the purpose of restoring his name. Due to his notoriety, he keeps his former identity a secret until the end of the novel. He coerces the warden of the prison into being a coach, which he does with great reluctance at first, but later gains celebrity status as the head coach and lets the success go to his head.The Feudball team, formed from the prisoner population, and led by the veteran Gordon Tanner (an ex-player convicted of arson & manslaughter,) gains in ability and moves through the local pub league and a regional tournament to participate in the Brython Cup.
The rest of the synopsis would be a spoiler and is not repeated here. If you are interested in publishing rights, please see contact details for further information.
Podem contactar os autores aqui:
-babs@feudball.com
-jethro2000@hotmail.com