I made a chaos team, the Death Valley Destroyers, to play my best friend Rich.
I'm suffering with a broken back (in 2 places) and Rich came over to have a game and cheer me up, problem was, he bought his snotling team...
Now, what you think of as a ogre team with snotlings, and what rich is tinkering with, a snotling team, are very different animals.

The team, as it appeared in Citadel Journal, is 0-4 Trolls and Snotlings.
I don't remember how the roster entry is worded, but the snots have the ORIGINAL titchy rule, i.e. after placing the first 11 on the pitch, roll 1d6-1 EXTRA Snots.
That's potentially a lot of the little green buggers.
Now, I like "unofficial" rosters. I think, as long as they are balanced (I know, I know), the more the merrier.
That being said, this snotling team is tough. and no mistake.
I won't go through a play by play, because that's not the point of this blog post (and I lost), but I'll give you a few highlights.

I kicked to rich on the first turn.
He used 3 Trolls and 8 Snots. Then he rolled for the EXTRA snots and got a 6, so 5 more on the pitch for a total of 11. Even at ST 1, that's a lot of the little pains.
His Trolls didn't do much but stand around and pick their noses, but Rich threw a 3 die block against my mino and not only he went down, he got KO'd. You read that right!
He did'nt even attempt to cage up. and since he rolled pretty good for extra snots most of the game, he just flooded my backfield with the snots, so I was dodging a lot (and failing a lot).

The final result was 3-1 and it was'nt even close. Too many dodges, and there are rules for "pogo snots" that he did'nt use. That may have given him even more touchdowns.
It was a fun game, but I don't know about how the snot team would hold up in league play.
They break easy, but cost little.


Today I've finally finished the painting of the mini I'll be sending to the BIG HOUSE! Don't know what I'm talking about? Read on...

(The banner is a link to their web page)


If you're a fan of Blood Bowl, just Dwarfs (or Dwarfs in Blood Bowl), chances are you're not a stranger to DA 40 MINERS dwarf team.
(Well, if you're a regular in the North American BB tournament scene, you might even have already played against them!).


According to their (fantastic) website they've been around since 2004, and since that date they have collected many trophy's and prizes (check 'em on their web site front page), making them one of the most respected (and feared) Dwarf teams around the Old World.

The constantly growing numbers of team fans, has already forced the team owner - Xtreme -, to quite a few improvements on the BIG HOUSE - Da 40 Miners stadium (you can check those past improvements in the "Big House" section of the site).

Today with a new renovation already on the move, Da 40 MINERS and his owner are asking to all of us - the team fans, to Sell Out the Big House (read all about it here).
All you need to do is to pick up and paint one of your dwarfs as a 40 Miners fan and ship it, so it gets to the Big House before June 9th.

You can find all the details on the links above, and sign up for the task in either of the appropriate threads: Talk Fantasy Football (Here!), or in Zlurpee forums (Here!).

Oh, and there are prizes for all who enter, so go in there and check it out for your self!

So, as I mentioned up there in the beginning, I've already finished up the painting my 40 Miners fan, but there's still plenty of time for you guys to paint yours and send them to Xtreme to help him out to Sell Out the Big House! It's gonna be HUGE so dont miss your chance to be a part of it!

Edit: ...with all the talk, I've effectively forgot to post one of the things I really wanted to (must be getting old).
Aside from the dwarf mini I've painted and will be shipping to the Big House asap (and that wont be showing here just yet), I've decided to complete the painting of (yet) another Miners fan, that I started painting almost two years ago, but that never go to actually finish.
I suppose there wont ever be a more appropriate blog post to show it so here it is, 'Golden Toe Joe' biggest fan, the 40 Miners fan number #41, Kragg Gurnisson, a real dwarf miner! 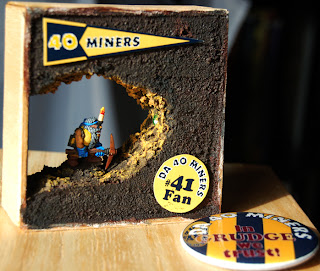 Check out all the memorabilia he collects from his all time favourite dwarf team.
He even takes it with him when he goes to work! 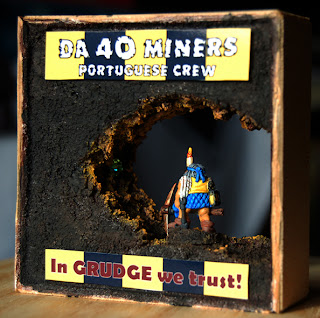 If you look closely you can see a shiny jewel he just found deep within the mine.
Tough job, but well worth it, at least today!


PS: Couldn't end the post without one last and quick note to wish AbraxiS a TON of luck, whom by now should be travelling to the land of chocolates and (Swiss) army knives, after a new job.
Fingers crossed to wish you the best luck buddy! 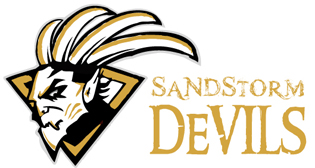 As many of you Blood Bowl fanatics know, one of the latest three races that the Blood Bowl Rules Committee (BBRC) endorsed were the Slann.
In the their (BBRC) fluff paragraph, they are described as "an ancient race of space travellers", where amongst their kind some "more energetic members enjoy travelling the realm and playing Blood Bowl".

With their skills (Leap and Very Long Legs on everyone of them), and this "ancient space travellers" kind of look in mind, I´ve decided to have a go at them using a box of GW kroot gifted to me a looooong time ago, for which I've (happily) never found any use before.

The conversions for most players were very simple (clipping off the weapons, some repositioning of the arms and legs, and some green stuff to fill the gaps).

One of my major concerns was to be able to clearly separate all the positionals (Liners, Blitzers and Catchers), so I've kept the Liners fairly 'normal', while giving all the armour to the Blitzers, and the most acrobatic positions to the catchers.


With the core of the team settled, I still had to find a suitable Big Guy (Kroxigor) for them, but since I wanted to keep the cost of the team low, and within the theme, I've nailed a cheap plastic Rat Ogre from evilbay, and sculpted his head from scratch, facsimileing their younger (and lighter) brothers heads.
The prehensile tail of the Rat Ogre was spot on, since the kroxigor also has one, so it saved me some work there! 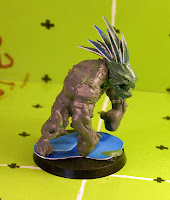 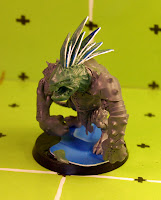 An undercoat and a few splashes of ink later, they were ready to step into the pitch and have a few games in our local league, the NABBO League!
Oh and speaking of ink, besides the distinctive poses I've decided to also give them different coloured "barbed spines" (those sharp things on their heads), to make 'em easier to spot on the pitch, both for me and for whomever I'm play with.

Here are some of the Liners, with their more 'normal' (jack of all trades) poses, and distinctive blue head tones...

The Blitzers get red/orange heads and a some armour to set them apart from their team mates...

... and the last contenders, the Catchers, get yellowish beaks and purple tones on the head spikes.


For the Big Guy, I felt it would be about right to give him the very same tones of the Blitzers, since he's supposed to be a 'strength' element in the team (a bit like the blitzers).

As a final touch I've built a "Turn" counter for the team: a banner inspired in Japanese crests, representing the distinctive the barbed spines in their heads. 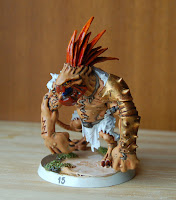 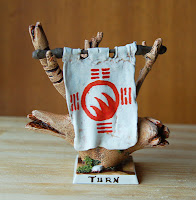