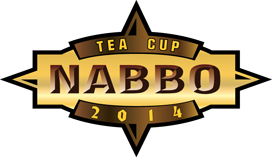 As previously announced on the blog, this past Sunday NABBO Tea Cup tournament has managed to get most of it's league crew together, for yet another super day, with abusive loads of BB chitchat, miniature showcase and dice rolling cursing.
As usual, a great fun time, and a wonderful opportunity to mingle with NABBO League old timers, that real life tends to keep away from each other.

This forth edition of the tournament had yet another amazing milestone to point out, our BB league 15th anniversary! (You know our motto: "Failing Go-For-It's since 1999", well, just do the math...)

For that very special reason, the tournament organization decided that this year's custom dice had to be somehow special, so what better way to represent that than make them "golden"?
Kudos to Chessex for them, as they are plain lovely, and the engraving is fantastic - as usual.


The only downside this year, was that we had a couple of friends that had previous commitments, therefore couldn't attend to the tournament, and since we're such a small league, any missing coach is heavily noticed. Apart from that, it was a bright and sunny Sunday and a great gaming environment, and that's what matter the most.


The games
This year, most "fineness" races forgot - or cowered - to show up. Since we had a tournament thematic house rule that would make two big stones move, randomly, in the pitch during the match, that would auto-blitz anyone in their path, that may have scared the pointy ears away.
(You can spot those "drifting stones" in the pics below: they're big, sand-yellow, and moved everywhere on the pitch. Beware!) 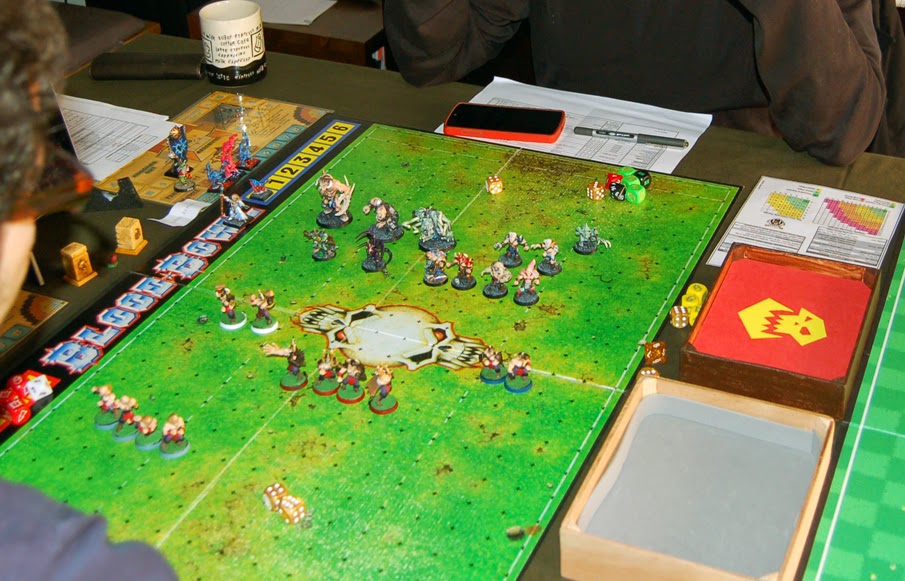 Ulric Uber Alles (a Human team with Norse ancestry) vs Mandelbrot Marauders (Chaos Pact)
A close game that ended with a 2-1 TD win for the MM (1-1 Cas). Coming from a tie, but benefiting from not-so-good game results of his direct contenders, this win gave the MM's just enough points to have a shot at the title in it's last game. 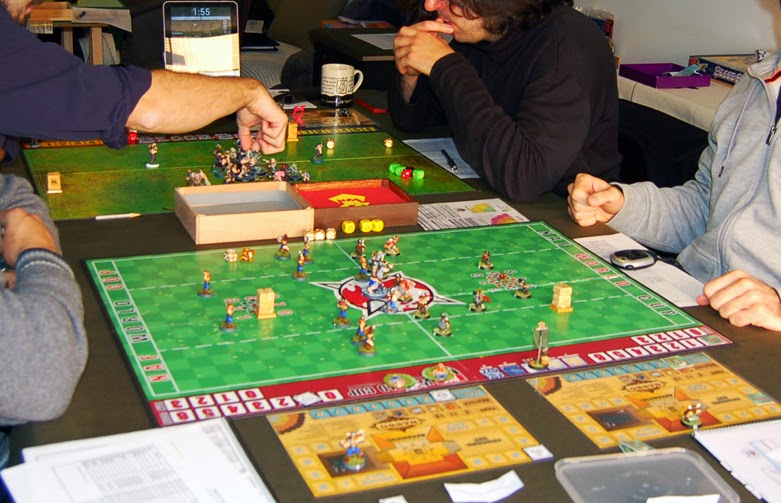 Playing in a Swiss system tournament (winners facing each other) the tough Ostrok Iceclaws (Norse) faced another first round winners, the Kraka Drak Dozers (Dwarf). An rampaging start from the OI, granted them the opening TD around turn 4, after an amazing pass (the norse thrower marked by two dwarfs), to a catch skilled runner (also marked by two opponents), that managed to dodge out and score in the same play. Unfortunately for the norse, the 4 final turns of the drive saw the dwarves KOd and Injure a handful of the Iceclaws, and equalising before the end of the half.
With three players missing in the pitch, and an Icetroll that refused to cooperate every other turn, the OI where unable to hold the Dozers for their 2nd half advance, and ended up loosing the game by 2-1 TD (Cas 3-0). 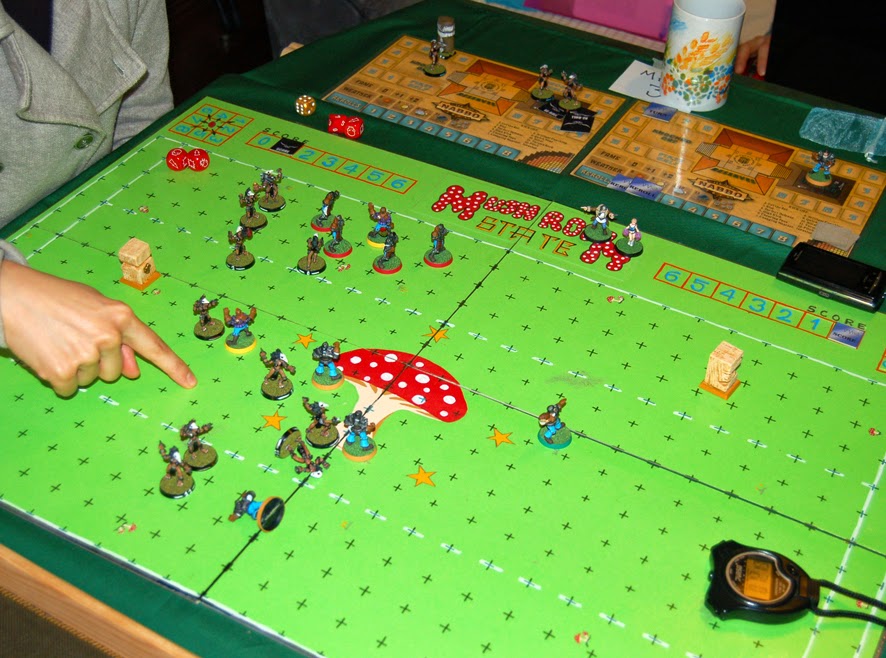 Black Ferns (Amazon) game vs. The Troopers (Human)
After a 1-1 draw in their first game, the zons entered the pitch with the right attitude, managing to score first, and then, even after the Troopers tied the game, the BF did score again.
But as the turns went by, so did some of the Black Ferns (to the Injured box), and being really outnumbered in the final turns had costed them another tie (2-2) Cas (0-2). 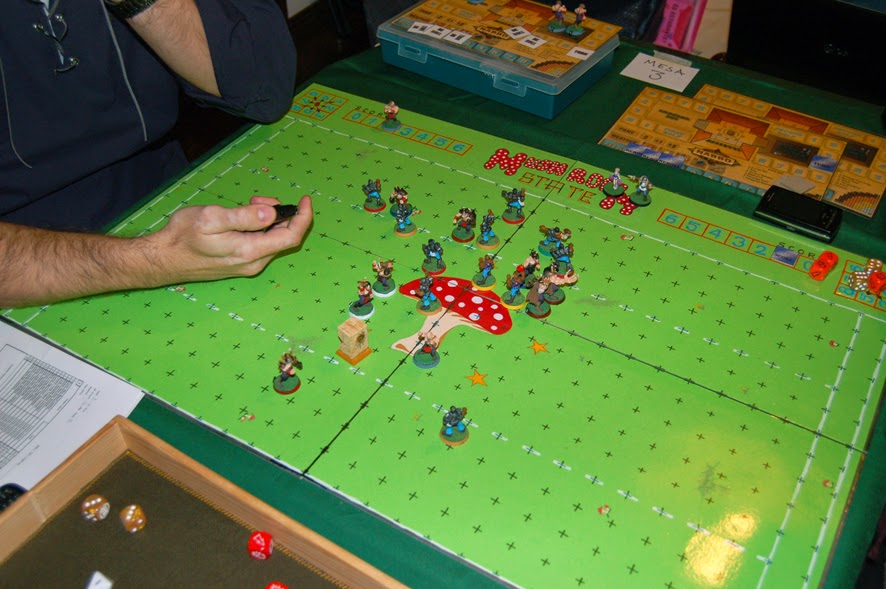 In the last round of the day, and playing for the Wooden Spoon (or away from it), the Ulric Uber Alles (Human), faced another human team, The Troopers. Plenty of loose balls, and back&forward playsended up with a win for the UUA by 3-1TD (0-2 Cas).
Rumours say that Nuffle kept a very watchful eye on The Troopers team during the whole event, making sure the Wooden Spoon wouldn't go anywhere else: bad dice rolls were a constant since round one (with the team finishing the game with only one player on the pitch), right until the last round (when every single dodge or pass attempt would result in a complete fail).

The tournament was won by the Kraka Drak Dozers (Dwarf), which in their last match faced the Mandelbrot Marauders (Chaos Pact), both aiming to win the Most Casualties trophy right from the start.
Despite the astonishing feat of achieving 12 Cas during the three tournament games (an absolute record for all NTC tournaments), the KDD dwarfs where denied their trophy because in the complex process of maiming their opponents, they ended up winning all their games thus winning the tournament!
Faithful to the "Spread the Wealth" tournament rule, the organization allotted the Most Casualties trophy to the second best at mangling opponents: the Mandelbrot Marauders!

A shout out to Fred from the Ligue des Quatre Nation (SBG in the TFF forum), for sponsoring a "Second Best of the NTC " prize (tournament 2nd highest place), with one of the lovely coins they've custom made for their 2014 tournament. The well deserving winners were the Black Ferns (Amazons). 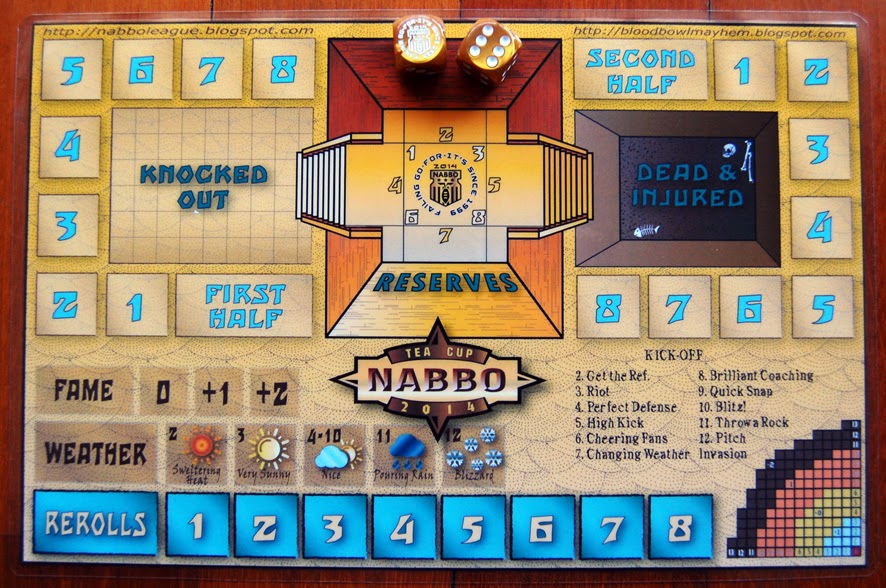 Just to finish up, here's a pic of the tournament SWAG (thematic dugout and custom dice).
We may still have a couple dugouts, and a few more dice to part with, so if you're interested, please drop me a PM on TFF forum.


This post was double posted in NABBO League blog.
Posted by Axtklinge at 18:40 Sem comentários:


The countdown clock is already ticking for this year's NABBO Tea Cup, the fourth edition of the tourney... 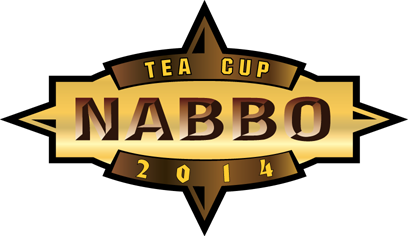 Scheduled for next Sunday, the NABBO League crew tournament still is a good few hours away, and already both teams and coaches are psyching themselves for the most enjoyable (yet very disputed) competition of the season.

This years tournament is taking place in the scorching hot lands of the glorious city-state of Kheente-Khefartha (a fictional Khemri city name with a Portuguese pun to mean something like "as hot as is gets"). Despite all the apparent nonsense of having a sports competition in such an "unfriendly" environment, an well orchestrated press conference gracefully informed all journalists and sports fans that this was a small sacrifice to a greater good: to encourage and develop the beautiful game of Bloodbowl, in the rich, endlessly rich lands of Kheente-Khefartha.
(Any similarities with this fictional theme, and real life sports, is a pure coincidence... perhaps.)


And while you wait for the report of the event, how about to have a peek of the previous editions of the NTC?
You can check them right here, just click on the link: NTC '11, NTC '12, and NTC '13.


Edit: This report was double posted on the NABBO League blog.