I hope everyone had a good summer. seems like I was just sitting in the heat 2 days ago, LOL!
Well, its tourney time in our little corner of pa. we are getting set for the Mike Kriger Memorial CUP, on Saturday October 31st. it will be held at the Nesquehoning rec center, from 10am until its done.

This year, we will have the new set of "wild things" models, Douglas and Max#2. New figures are always fun, and we are very proud of these new figures from ace miniature man, Rykar. He did a great job bringing these monsters to life.

By now, most here know the story about our event and the figures we have bought to the game. my cousin mike, was killed in the fighting in Afghanistan. He was my best friend, and he was a founding member of our gaming group, The Thursdaynight Hero's. To say that his death left a hole in many peoples lives would be an understatement. Mike was a kind person, always ready to help a friend as well as a stranger. he sadly left behind a wife and little girl.
This year, we are hoping to surpass the $300 mark with donations to the Wounded Warrior Fund. this organization is set up to help our vets who may need help. Services like mental and physical therapy, service dogs, housing, and things like that.
We know mike would be proud.

If you'd like more info on our event, please feel free to contact me. Our tourney is for beginners, so don't expect "NAF" level game play, but the point of the event is just to play blood bowl and have fun doing it.
If you can't make it, and would like a set of these limited miniatures, they are $20usd per set, and a portion of the sales go to the Wounded Warrior Fund.
I only wish we could do more, or I wish I could give one of those big fake checks, just for the LULZ! 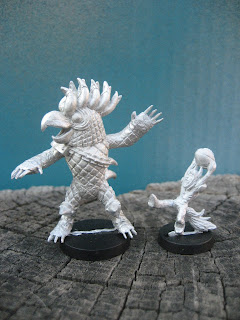 Enviar a mensagem por emailDê a sua opinião!Partilhar no TwitterPartilhar no FacebookPartilhar no Pinterest
Labels: bound for glory, Doug and Max 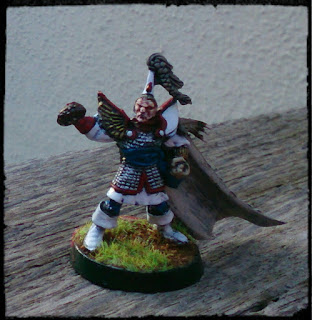 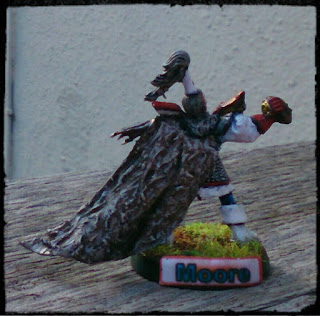 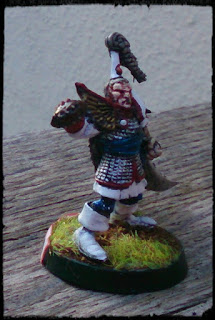 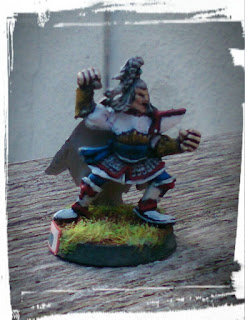 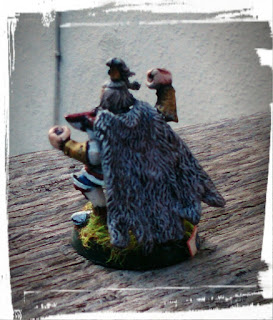 
Almost one year and a half ago, here in Merry Mayhem News blog, we started a couple articles featuring Bound For Glory bloodbowl tourney, the "Mike Krieger memorial Cup", and the lovely set of limited edition miniatures that he and his crew (The Thursday Night Heroes) have put together for the event: here, and here!

The selling of those, aside from helping funding the tourney, also had the grand objective of providing a donation to be handed over to the pa's fallen soldier fund.
(I obviously could not pass the opportunity to have a go at painting this such exquisite pair too - here - besides I reeeeeeeally loved the movie).

So what's new, you may ask?
As promised back then by BFG, and once again with the help of Rykar (the sculptor), they have another set "on the forge".
This time it's "Doug", the big guy who gets the (well deserving) spotlight, but rest assured that he will also have the company of Max (and yes, a differently sculpted version of our little friend "Max"). 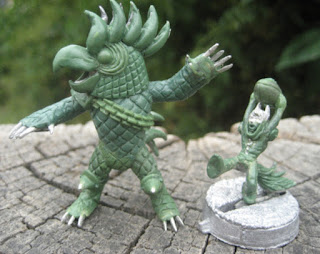 Here's a photo of their greens, as found on the "wild thing #2 coming soon" post in TFF.

Too cool to be truth?
By all means, click on the thread link above and go check it out your self!


And yes, start putting a few coins aside to get them when they get out, they deserve it!

If you're not there, make sure you keep updated with one of these links: 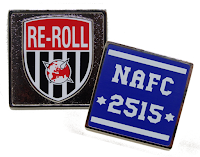 Above a gift to be presented to all attendees at this year's NAF Championship! 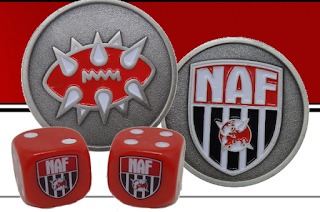 Last but not least, this year NAF gift!

Posted by Axtklinge at 10:09 Sem comentários:

Back for more!
As promised earlier in the week in the first part of this post, here are the pics of my new undead team, the Mückenhof Ravens.

These are the Mummies of the team (they do have bandages so...).
They will also do as Flesh Golems too if the need arise.

Wights!
The workhorses of the team, specially early in the season as the only positional starting with "Block". 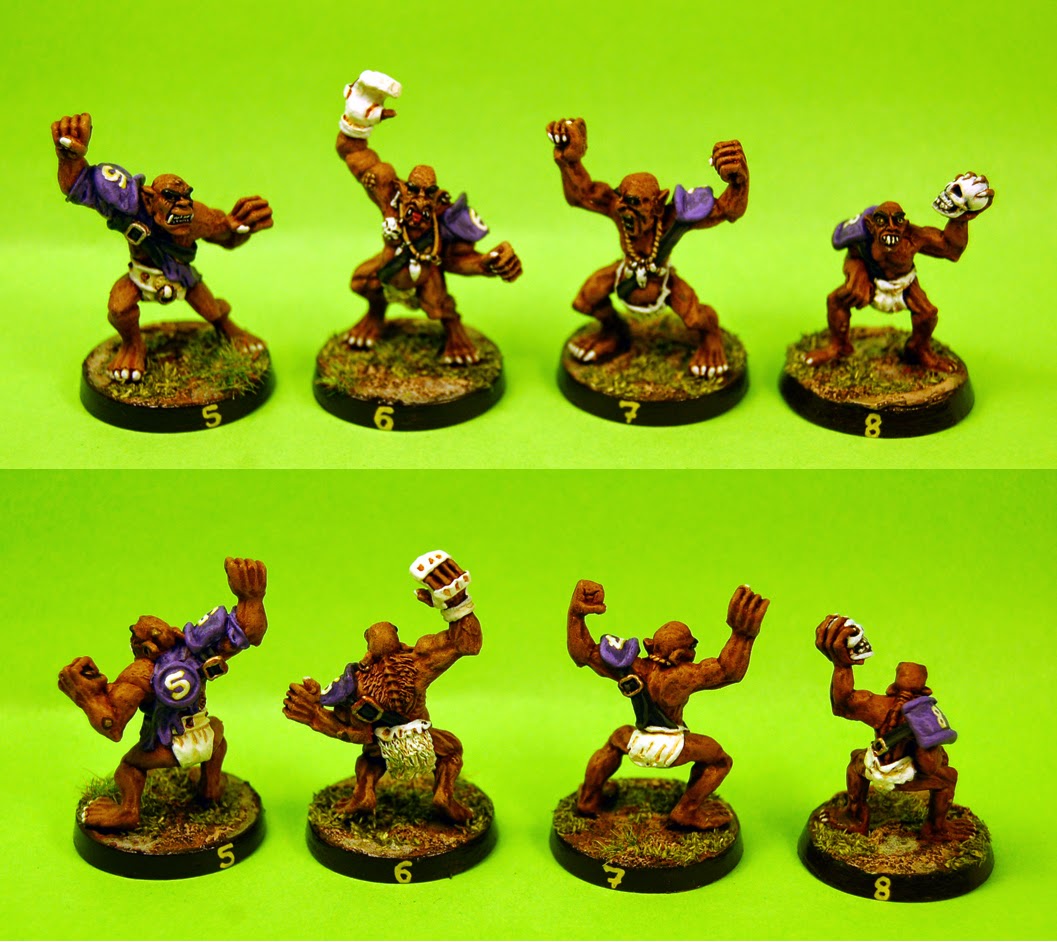 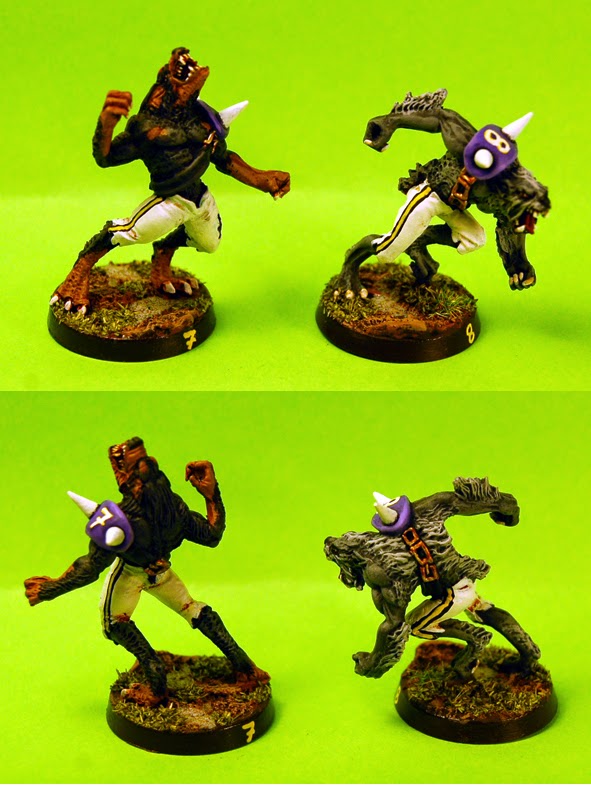 For now these werewolf's are just cheerleading for the team... 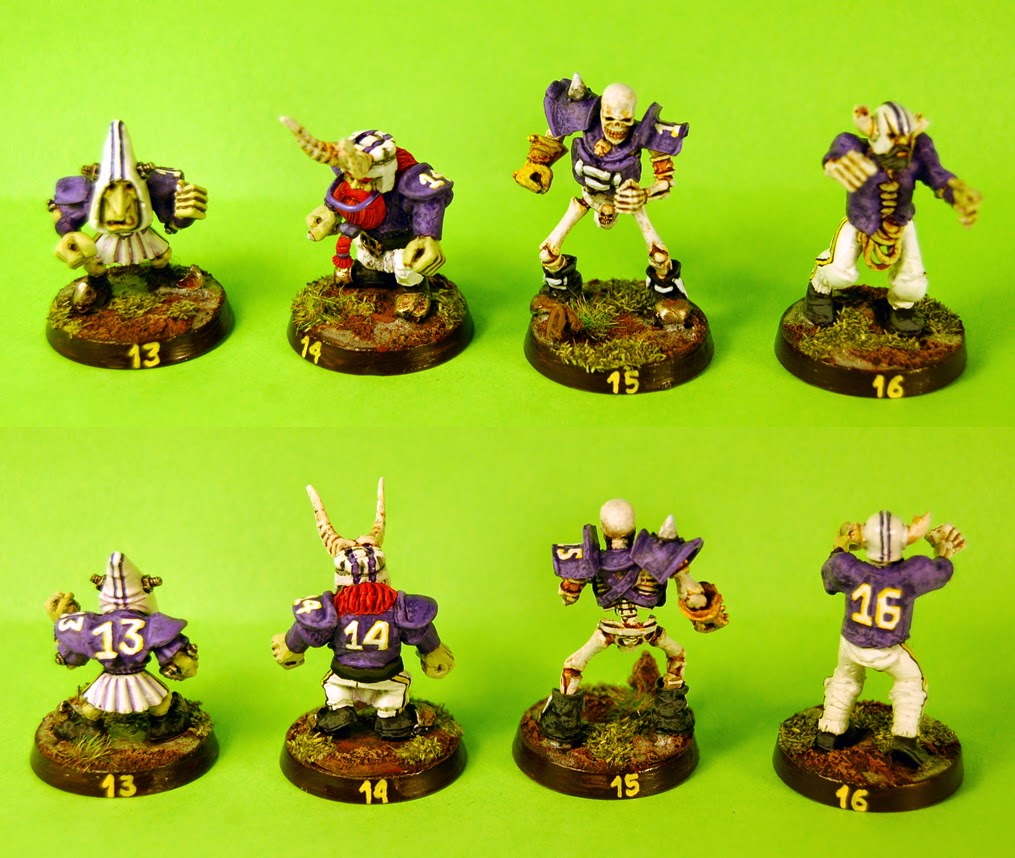 Zombies (and Skelie)!
They don't move much, you can't trust them to reliably help on any picking up, passing or catching the ball, and it's a formidable pain to manage to skill them up.
The perfect piece to tie down that pesky Ogre in the LOS! 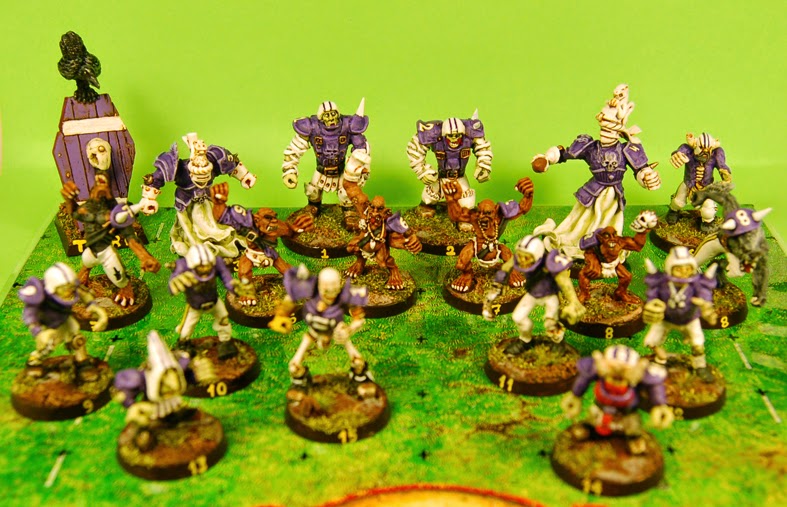 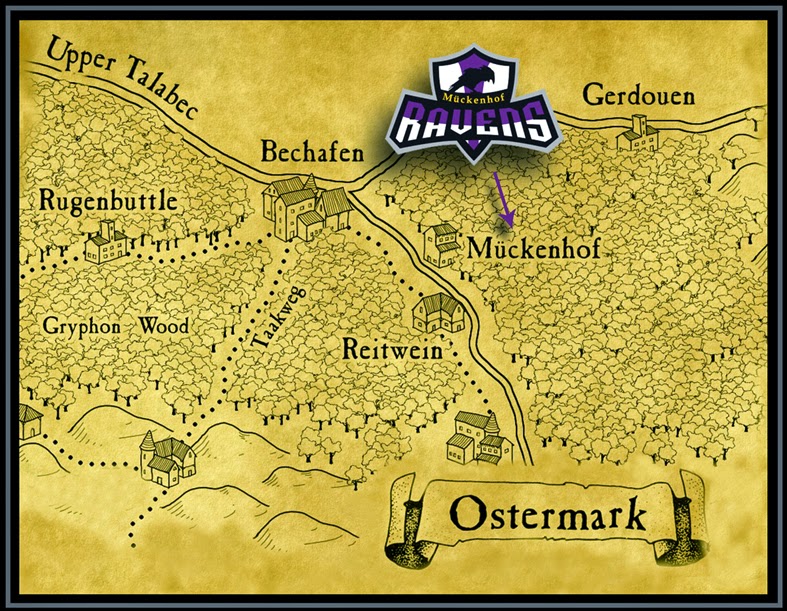 And if you have no idea where Mückenhof is, cheer up, here's Ostermark map!

Comments and questions are welcome!
Cheers,
A.

With the new season of the NABBO League well on it's way (XIII by the way), I finally get some free minutes to write a few of lines about the new team I'm playing this season...

Since NABBO League early days, and in order to cope with the limited availability of time to play that a good part of our coaches always had/have, we decided that a perpetual format would suit better our interests, allowing even the most busiest of the coaches, to drop by less regularly, and still have a team to join the fun with the rest of the crew.
Obviously, along the way, many coaches decided to pull the plug on their teams for plenty of the usual reasons (untimely death of team stars being one of the main), and so, with very few exceptions, every third or fourth season the teams ended up being "naturally" renewed.

In the end of the last season (while commemoration the 15 year anniversary of the league), it was decided to "reset and start over" the perpetual format, and with it, make some changes in the league rules, namely the MVP given in the end of the game (it used to be a coach choice, and became random).

Now, I always try to grab these opportunities to either start something new, or actually complete one of the projects that I always seem to have going on, and so, after some thought into it, I opted for this Undead team that I had converted a couple of years ago, but never got the chance or time to paint.

Most of the positionals are converted from leftover bits (from different GW sprues) and some green stuff to tie all together. The Ghouls are from GW fantasy (straight forward weapon snip), and the Werewolves are from West Wind  (that I decided to include to allow me to change the team from Undead to Necro, if wanted in the future).

Here are the photos of the team positionals, prior to their paint job: 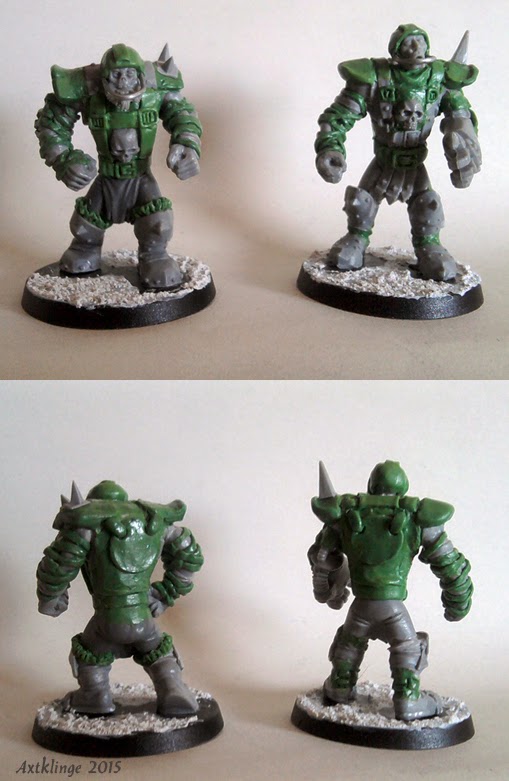 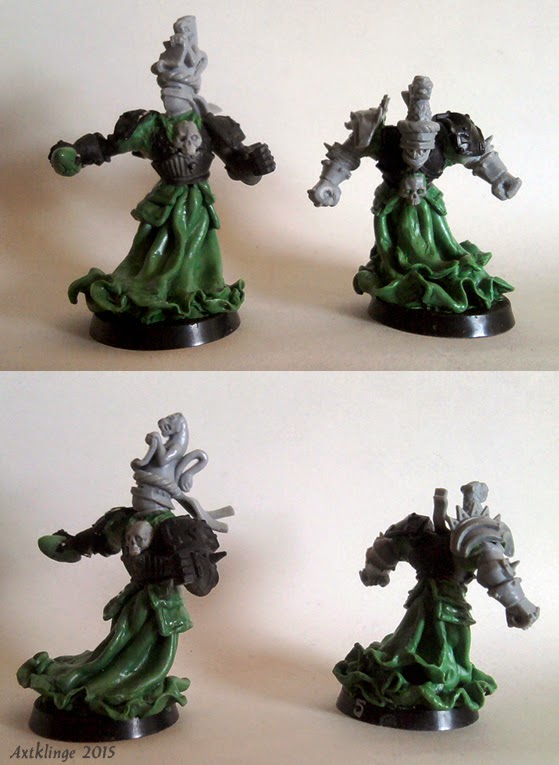 Both Flesh Golem and Wights 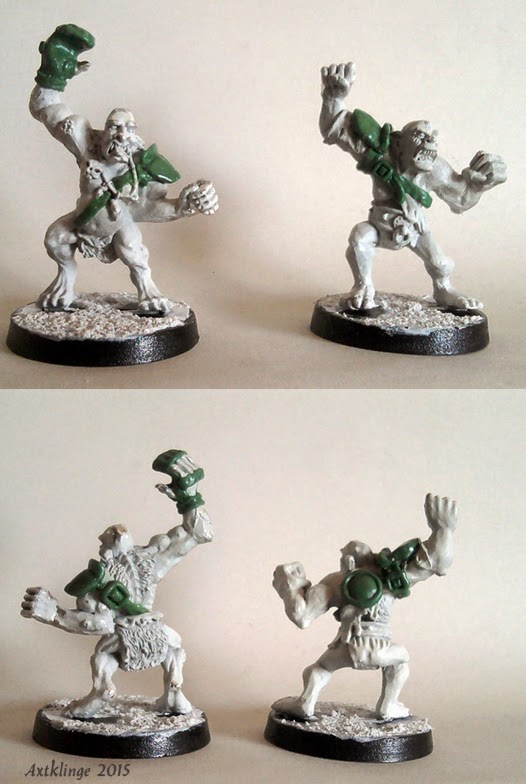 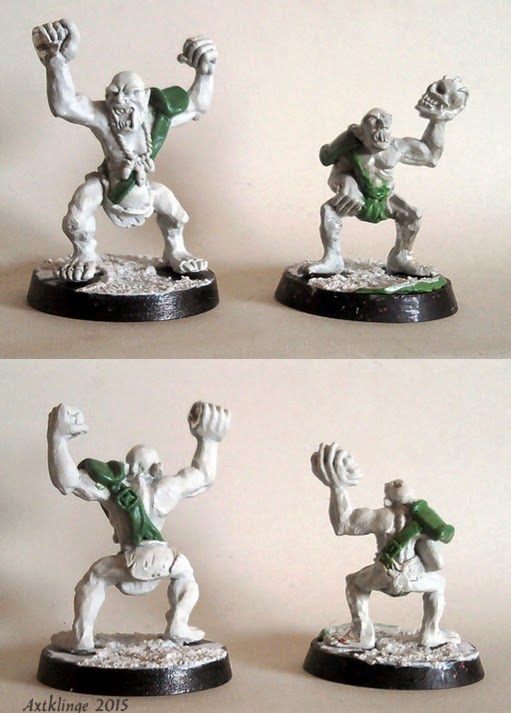 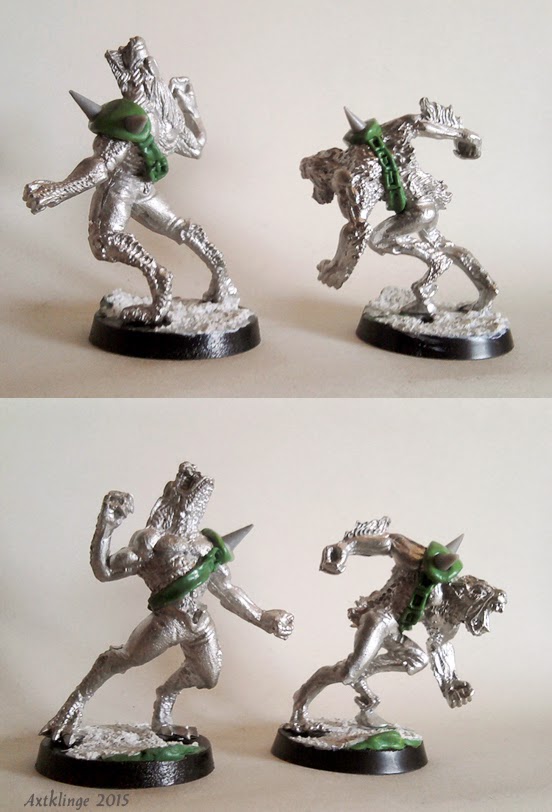 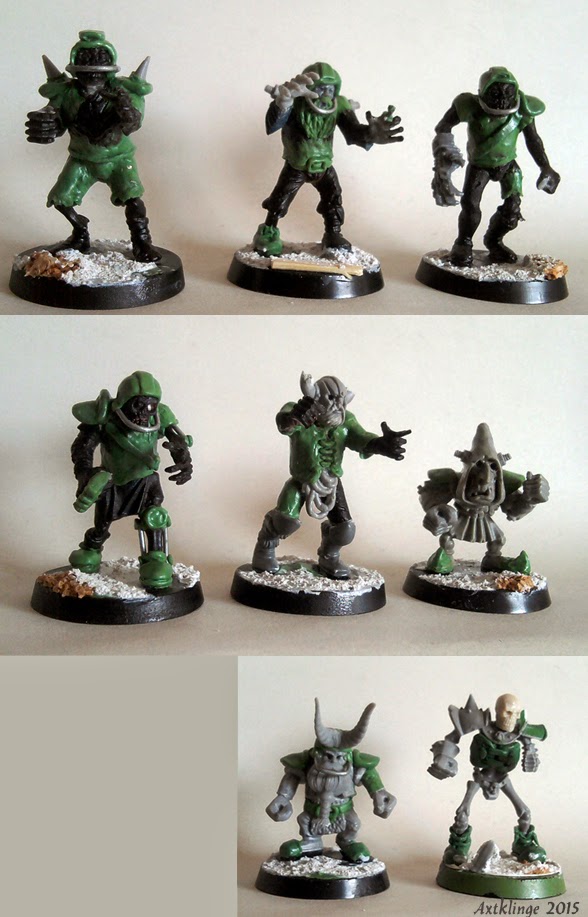 The Werewolves, a bunch of zombies, and the odd skellie
(beware, he's got the fouling boots on!)

This is it for today, hope you liked them.
If time allows, I'll be posting the pics of them painted later this week.


So here's my take on the paint job of Lova Taytoopoo, the ZlurpeeBowl V tournament mini.
She also came with an extra arm (to replace the B&C for a clenched fist with knuckles). 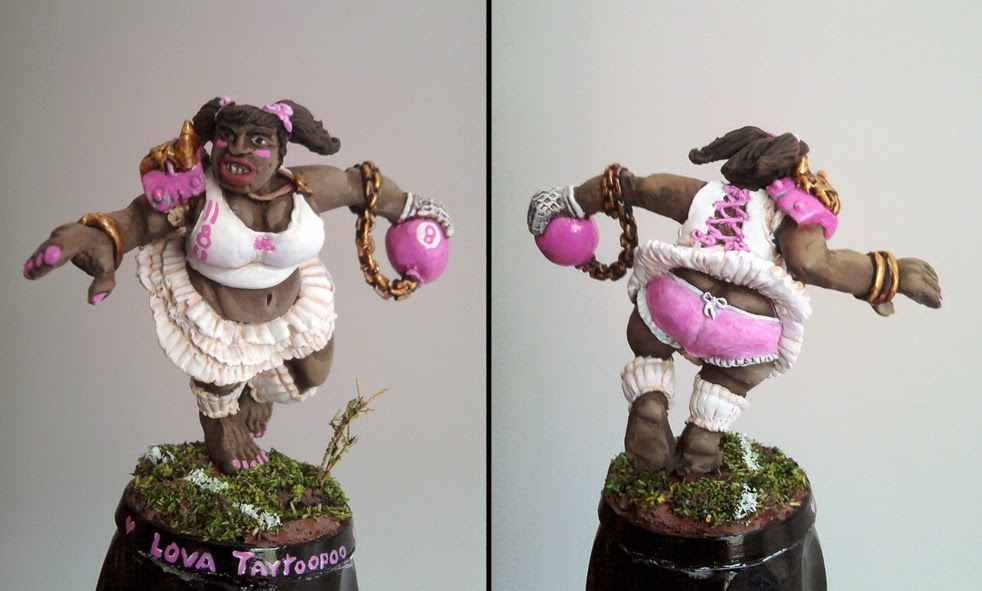 She will also be representing Bertha Bigfist ogress star, in NABBO League table top league, and if you're curious about what her original BB stats where, here they are:
Lava Taytoopoo  5 7 1 8  (220.000 gc) - Really Stupid, Ball and Chain, No Hands, Secret Weapon, Mighty Blow, Grab.