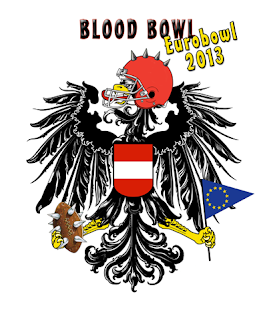 Just a reminder to all Blood Bowlers out there that Eurobowl is taking place this weekend in Vienna, Austria.
Good luck to all the coaches out there!
Oh, and keep an eye on the blog 'cause we might end up with a report about it...


Most of you probably already know something about Thrud the Barbarian, either in the form of the comics character, of Thrudball (the BB tournament in aid of The Roy Castle Lung Cancer Foundation), or it's miniature in a Blood Bowl pitch somewhere (see below)...
What some you of you might be missing is that he started as a comic strip, quite a few years ago (1981), in the pages of White Dwarf Magazine by the hands of Carl Critchlow. 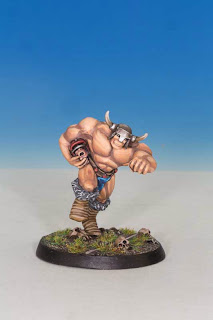 Image from The Stuff of Legends.

Here's how fellow TFF'er Giraffe told us about some very interesting news about it:

For those of you who've heard of charity bloodbowl tournament Thrudball , but are too young to recall White Dwarf Magazine back in the 80's, I wanted to share this news about Thrud The Barbarian.
Those of us 40something White Dwarf Readers will fondly recall the old black and white Thrud The Barbarian comic strips (in about 60 issues of White Dwarf, won several readers awards for best article)...but might NOT know of artist Carl Critchlow's Eagle "Small Press Award" winning Colour Graphic Novels ...

Titan Comics have released a Thrud the Barbarian hardback collection, containing all five of the colour Thrud stories, plus a few of the old monochrome strips from the 80's plus some NEW bonus Colour Strips never seen before...

I simply cannot recommend this enough to you, it's an absolute HOOT, if it doesn't make you laugh, then nothing ever will...
(...)

( You can read Frank's the original TFF post here: link). 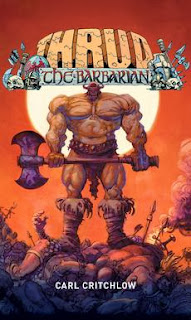 Here's is the cover of the Thrud The Barbarian (Titan Edition - Hardcover) book, and you can find some more info about it's contents right here: yet another link.


I'm old school.
Well, maybe not so much old school, but certainly old.
I was told, when I was asked to write here, to write what I feel, and to be honest, to tell it like it is, I do that. Sometimes I get s**t from others for doing it, but sometimes the truth (as I see it) hurts.

For those of you who run tourneys, you know how hard it is.
Everything to do with it is hard. I have found that:

1) Finding a venue.
As I'm in a small town, there is only one suitable place, besides trying to squeeze everybody into my basement. That’s the town rec hall. Its roomie, has plenty of nice tables and chairs, and very clean rest rooms.
But the hall is pricy, and they just raised the price this year.

2) Advertisement
Putting notice on line is free, and many very kind people I have met through blood bowl boards have offered to put the word out on sites I had not visited. But I also put notices in the local, and not so local, game/hobby/model shops by way of signup sheets, advertisements, etc. That’s also free, but driving there is not. I'm far from most of these shops, and since I broke my back I haven’t driven so my wife does the driving, and that’s on her time. And gas is only getting more expensive these days.

3) Having enough... of EVERYTHING!
And this includes BLOCK DICE. I have 60+ block dice, which, not to call anyone a thief, I come up short a few after every tourney. I could use plain old 6 sided dice instead of block dice, but I want people to have the whole BB experience. Call me an idiot.
PITCHES
After looking at my Impact! green felt pitch, my wife got in her head to make pitches for our event. Without telling me, she went out one Saturday morning, got some yards of nice, blueish-green felt, a T-square, and a bunch of paint markers, and while I was up in bed sleeping in, she made the first of 30 hand made no frills pitches.
They are very nice and I'm very proud of her work.
TEMPLATES
This year, instead of having my club mates hand over their templates for the event, my wife and I are going to make a bunch of sets. I have to get on this, as its almost time...
DICE
I have this covered, considering I've been gaming since 1977 (I have about 100+ d6, about 40+ d8, and about 20+d16), and I have a bag of over 400+ dice of all kind. But again, many of these commons go missing at each event...
DRINKS/ SNACKS/ PIZZA.
Doms Pizza will be donating the pies again this year, so no cost there. But I pay for the soda and the snacks for the event. That puts me back about $50. I get some of the cost back from the $10 entry fee, but when the rec hall fee is factored in, not much.
AND ANYTHING ELSE I FORGOT...

What’s my point here?
Every year except this 2013 (I finally learned my lesson), I have emailed all the miniature fantasy football producers and asked for a donation of any size. I am not proud. I would be very grateful to receive one figure, if that’s all they could provide. Heck, I would gladly pay shipping costs for that one miniature.
I’ve explained what our event is, size wise. I have told these producers about my cousin Mike, and how he was unfortunately killed in Afghanistan. How much Mike loved the game of blood bowl and how much mike was loved. How I pay, out of my own pocket, for most of the costs of the event.
Count on your fingers how many bb/ff companies you can name. Don’t count games workshop, as they are a lost cause, LOL.
Do you know, the only companies that help our event are GASPEZ ARTS, WILLY, and IMPACT!?
Every other company I contacted either refused outright, or ignored my emails. Some telling me our event was too small to support (they did not expect any business from their support), or because we are not NAF supported, they would not donate a prize.
Most of the support we receive is from my friends: glowworm, East Coast Quake, all the guys from Spain. Friends!

It saddens me that most of these companies would not even take a moment to email me and tell me no… what does that say about these companies? I understand the world economy is terrible. I get that, but how much does it cost to email me?
Or to put a figure in a envelope and do a good thing for a good cause?
Are they too ashamed to say "I am too cheap to support your memorial event dedicated to a friend and cousin killed in a war”?
It’s a sad comment about these companies...
Posted by bound for glory at 06:57 3 comentários: