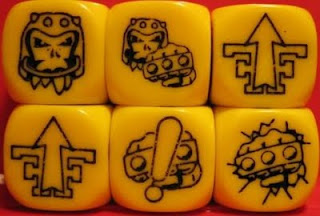 Posted by AbraxiS at 12:05 Sem comentários: 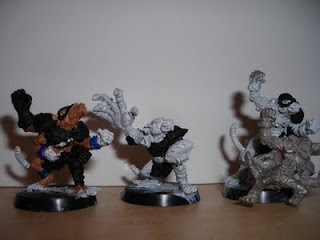 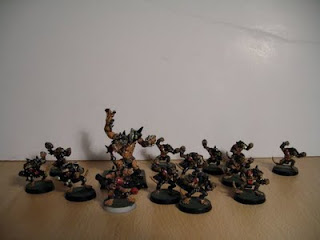 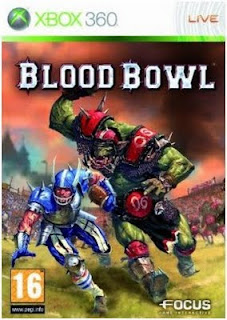 Posted by AbraxiS at 19:54 Sem comentários:

1) Flesh Golems on Necro back to LRB 5.0 110k
2) Master Chef for Flings back to LRB 5.0 100k
3) Deeproot to 300k
4) Morg to return to LRB 5.0 430k
5) Glart to 210k
6) Fezglitch to 100k
7) Eldril to 200k
8) Zzharg to 90k
9) Dolfar to 150k
10) Crazy Igor to 120k
11) Bertha Bigfist to 290k
12) Pass Block: A player with this skill is allowed to move up to three squares when the opposing coach announces that one of his players is going to pass the ball (but not a bomb). The opposing coach may not change his mind about passing once Pass Block's use is declared. The move is made out of sequence, after the range has been measured, but before any interception attempts have been made. A player may not make the move unless able to reach a legal destination and may not follow a route that would not allow them to reach a legal destination. A legal destination puts the player in a position to attempt an interception, an empty square that is the target of the pass, or with his tackle zone on the thrower or catcher. The player may not stop moving until he has reached a legal destination, has been held fast by Tentacles or has been Knocked Down. The special move is free, and in no way affects the player’s ability to move in a subsequent action. The move is made using all of the normal rules and skills and the player does have to dodge in order to leave opposing players’ tackle zones. Players with Pass Block may use this skill against a Dump Off pass. If a player performing a Pass Block in their own turn is Knocked Down then this is a turnover, no other players may perform Pass Block moves, and your turn ends as soon as the results of the pass and the block are resolved.
13)Special Play Card clarification: Once you have randomly drawn a card you may conceal the result until played but you may not exchange or trade it in for another card.
14)Revised Riot wording: Riot: The trash talk between two opposing players explodes and rapidly degenerates, involving the rest of the players. If the receiving team’s turn marker is on turn 7 for the half, both teams move their turn marker back one space as the referee resets the clock back to before the fight started. If the receiving team has not yet taken a turn this half the referee lets the clock run on during the fight and both teams’ turn markers are moved forward one space. Otherwise roll a D6. On a 1-3, both teams’ turn markers are moved forward one space. On a 4-6, both team’s turn markers are moved back one space.

And now the caveat: Games Workshop is concerned about the number of fantasy football miniature companies now showing up in the world. GW has also noted that several of the Star Players do not have official figures. They have agreed to allow them in at this time ... however over the coming weeks (perhaps months) they do NOT want to see discussions (or worse released figures) from other miniatures companies about creating figures to fill in for missing star players. Miniatures released by any company should not be marketed online as being a great figure for such and such BB Star Players. It was made VERY clear today that if GW sees such marketing happening ... they will pull the LRB 6.0 (or modify it before it is officially posted) and remove all star players from the document that do not have an official BB figure effectively deleting the rules for that player from the game (and since LRB 6.0 will be the offical rules for many years to come ... this will be a serious deletion). So not only would this erase all the LRB 6.0 stars added to balance out the game and team's inducements. But many LRB 5.0 stars (Ramtut, Zara, Hemlock, Helmet, Ugroth, Spleenripper, etc. etc) would be deleted from the rulebook as well. I've already written every head of every miniature company I know of and requested that they stay away from anything related to targetting the BB Star Player market. At this point ... I just want to get the LRB 6.0 hosted by GW so we can call this project finished for the good of everyone. 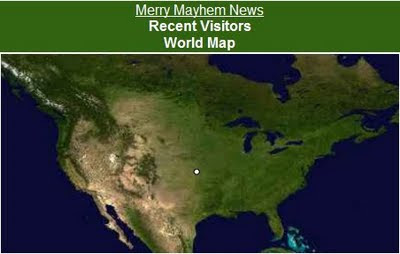 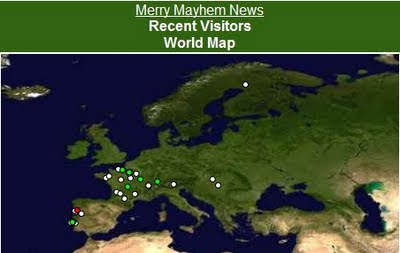 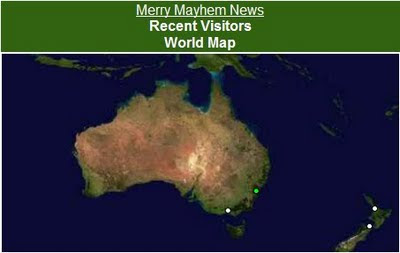 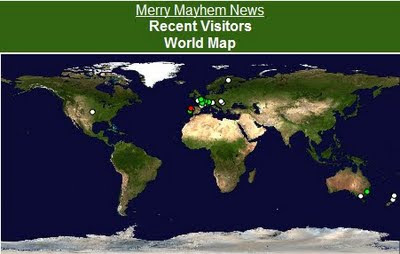 Posted by AbraxiS at 12:17 Sem comentários:

"Folks just so you all know, and in case you miss the other posts we will be migrating the transfer from TBB to http://www.talkfantasyfootball.org/

That site is up and showing the hosting company's default page.

Johnny is sending me a copy of all the data and content (so all user details including post counts) on Sunday night (UK time). I expect it will take a few days to get working so please be patient, but it should all be done by 13th Nov. 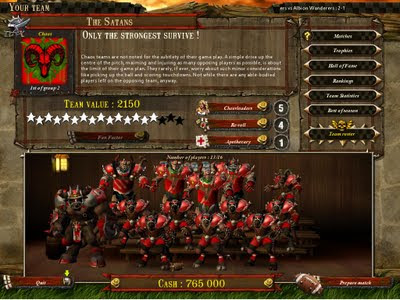 Posted by AbraxiS at 18:01 Sem comentários:

"Got my letter from GW today.

I have to pretty much take down blood-bowl.net. They objected to the domain name and the library of all the old articles that I had on the site for folks to reference.

My bigger issue is that I don't want to take down the MBBL and MBBL2 and I was not asked to do so ... so I need to figure out how to create a new domain and still have those leagues work. My biggest problem is that the PHP running the league has a lot of links to the website itself ... I just hope I can catch them all the changes I need to make.

Unfortantely b-b.net isn't that great a name and to be honest the whole reason I started blood-bowl.net was for it to be a library resource and GW now says that is a no go so the whole point of the site is really dead ... really too bad as we just had our 500,000 hit to the site.

The other C&D items I received I can deal with. Some wording changes required on the www.thechaoscup.com I can handle.

I need to cancel the link for bloodbowlfigs.com ... but I expected that one was coming.

I've also been told to not sell engage in commercial Impact! activities at a Blood Bowl tournament. This one I will admit caught me off guard as in 4 1/2 years an owner of Impact! has only ever done this one time and it was at the express invitation of the organizer. So that one is pretty easy to agree with as we didn't do it anyway as part of our business.

So that covers the legal stuff aimed at me.

Anyone who is better at websites than me and has a good idea how to port over the MBBL and MBBL2 to a new home that would be great. I'm going to talk to my webhost and see if they have a way to just move it all to a new domain if I get one. 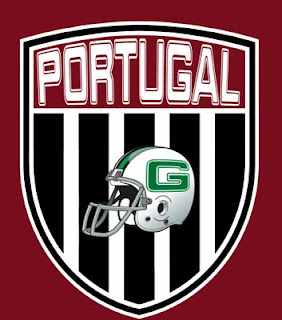 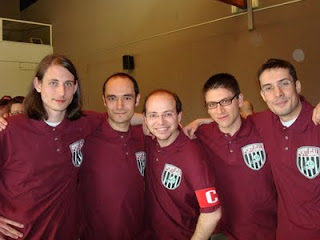 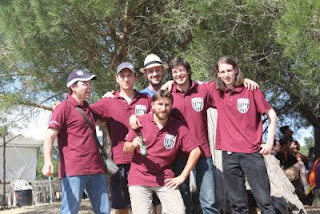 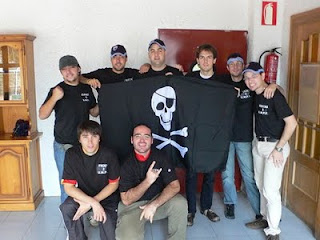 Posted by AbraxiS at 03:24 Sem comentários:

Today I received a letter from the Games Workshop Group PLC stating that if I didn't compy with 4 directives within 14 days they would take formal proceedings against me. It saddens me to see GW take such action against a perfectly legitamate fan site that has provided a global communications portal for BB fans, with no intention of conning them out of the millions they make in sales. I feel that I have been stereotypically branded as an Internet con-man. I have been a GW fan for 20+ years and this site has been active for almost 9 of that 20. This site has also had GW staff registered and actively contribute to its content (it may still have).

The assumptions from GWG PLC are that I am making a profit from the donations received by this site. They also point out that consumers may believe TalkBB is connected with GW and the fact the domain name includes Bloodbowl which is an infringement of GW's registered trademark. Now, I am not against their need to ensure their trademarks are not used inappropriately, I feel they could have approached me in a more friendly manner to investigte the purpose of the site and discover that I only wanted to provide a hub for dicussing Blood Bowl globally. instead, they immediately enter heavy handed.

If they truely believe the donations have contributed to me becoming a wealthy person or that I have made enough money to give up a proper job they are sadly mistaken. The small amount of money donated has gone to pay for the upkeep of the server (when I used my own hardware and hosted it at home) or towards the costs for hosting with an ISP. In short I have been vastly out of pocket to provide TalkBB rather than the other way around. I thank all those that have contributed as it has helped TalkBB survive.

I have been asked to:

Now, I could simply remove Bloodbowl from the domain by renaming it to TalkBB.com, but that means buying a new domain and time spent sorting everything out. Bearing in mind I hardly visit TalkBloodBowl.com anyway, I can't really be bothered with all that so have decided to let it die. Therefore from Sunday 8 November 2009 http://www.talkbloodbowl.com/ will cease to exist.

Should anybody wish to take ownership of the source and contents I will be more than happy to prepare it for transfer, although this will not include the domain name. I will also have to ensure the recipient will not use DB content for anything other than to maintain the forum as part of an existing Blood Bowl site. This is to ensure passwords and emails do not fall into the wrong hands.

Thank you for your support over the years and for making TalkBloodBowl.com what it is today. Without you all it would have died all by itself many years ago, regardless of donations.