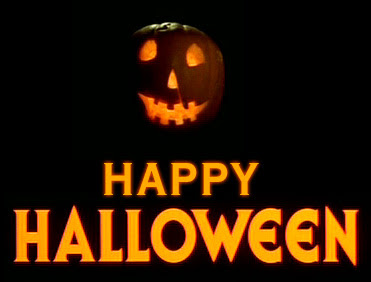 Thanks to Roy Whutupshun Moris for posting this in his FB...

Ps-How many of you danced with this?I sure danced...lolol
Posted by AbraxiS at 16:03 Sem comentários:


Here I just wanted to compile a quick Deathbowl IX summary.  My apologies for how long this has taken, I had no opportunity to post anything while in Ottawa for the tournament due to all the drinking and shenanigans - and once back I had an extremely busy week so this was really my first day with a solid chunk of free time I could devote to compiling the recaps.

In the end I went 1 win/2 losses/1 tie, and finished in 17th place (out of 20) - so another game would have put me on the bottom table!  I finished just behind my opponent Colin (orxymandiuz) from game 4 even though we tied so I`m guessing he had less losses than me.  Happy I managed to stay above the new kid Kohl who joined us for his first tournament (who won the rising star as he was greatly improved across the tournament) and considering who my losses were to I don't feel too bad about my performance. 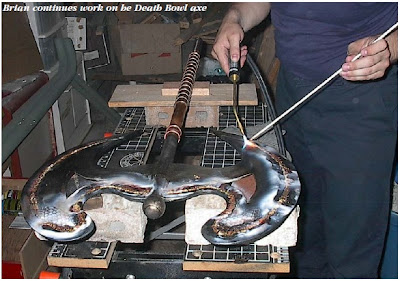 Slann are definitely a strong team for the deathbowl format, getting Leap + Very Long Legs is a potent combination.  I think next year I may need to try having a super player like Leathan does when the tournament rules offer than option.  I will need to practice keeping that player alive too.

dual posted on GWpertinent
Posted by Tristan M at 00:14 2 comentários:

Hey guys...this is just a quick update about the Orclahoma Bowl.

"Get Ready for the Orclahoma Bowl!

Orclahoma... a land of savagery in both its weather and its inhabitants. Long ago driven from the rest of the Southlands, the many tribes of Savage Orcs came to this land and called it "WAAAAHH!", which translates to something stupid, so most people just called it Orclahoma. Told they'd have their own land,the Orcs prospered and lived peacefully, or as peacefully as Orcs can live. Not long after, the fabled tomes of Nuffle were found and the games reached far and wide across the great lands.

After many years of reporting for the Nuffle Broadcasting Cabal, Orclahoma native, "Scary" Harry Badsaw, decided what better way to share his love of Blood Bowl with his people than by holding his very own tournament. With that, the Orclahoma Bowl was born!

Knowing most teams and coaches have no desire to come to the savage land, Badsaw built an impressive stadium(Badsaw Farmily Memorial Stadium) and convinced some Greenskin star players to offer their services up to any team who was willing to pay them. Not only did he get current star players, he managed to talk "The Crom" himself, Cromnard Dung, out of retirement and to offer his services for this tournament! Who knows who might show up in future tournaments, rumor has it that Greaser Geargrinder was seen buying new parts...

Fans of Blood Bowl will be glued to their seats! The mighty Orcs bashing and mauling each other! The Orclahoma weather changing hard and fast! Great fun will be had by all! And even more-so by the fans that survive!

All games will be broadcast by Cabalvision!"

Also,if you can,please check this out: Angry-Nerds ... and this: Couch Pirate Radio i bet you´re gonna like it BIG TIME :)

Tumbled on this youtube video and found quite interesting his insight on the "Dungeons & Dragons" theme.
Worth checking out IMO.

Still, now that I think of it I'm not sure I'd like to have this dude pulling a sword in the same room I was in...
Just a thought.
Posted by Axtklinge at 17:48 1 comentário:

I managed to tie a game.No ones going to stop us now...we will be invencible...we will conquer the world...and maybe Europe...if we got the time for it ;) 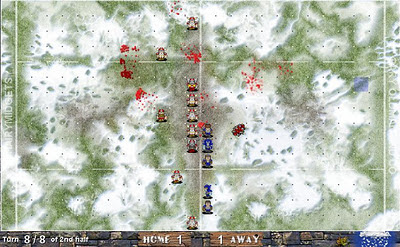 And heres the stats: 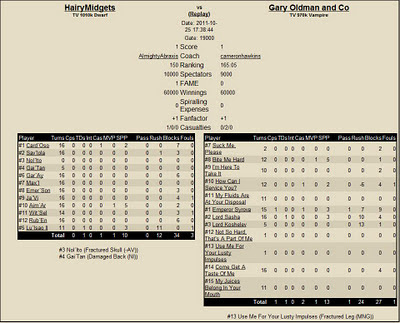 ...been playing FUMBBL and...i think its awesome,especially if you dont have Cyanide´s Blood Bowl like me....and i mean an original copy here...lolol.

My most active team (2 games) is the HairyMidgets (Dwarfs)...i´ve lost the 2 games,2-0 both,against Undead and Chaos,lost a blocker wich turned into a zombie and in 32 turns,i´ve rolled between 15 and 20 skulls...

Nuffle hates me so much ^^

It's almost MAYHEM time aka off to Deathbowl IX


Well I completely failed at doing any painting at all on the team I wanted to bring this year (that I started painting immediately after last year - can you say EPIC fail???) but I feel I have sufficient excuse with how busy things have been (buying a house, staging our condo to sell, being the only guy left in our department at work) so I don't feel too bad about it - there's always next year!!  For any NAF members you can check out the NAF thread for more info if you are interested!

In the end I couldn't even decide on a single roster, so I am bringing both the slann and elf models and will see how things pan out over tonight.  I have 3 of my preferred rosters printed out (1 slann / 2 elf) which should be pretty sufficient to make a choice tonight.  If anything the slann would only change a single skill on one catcher so I can just cross that out.  If I end up re-doing the pro elf roster completely I could be in for some last minute scribbling!
Just a quick update to remind everyone I will be doing some live tweeting during the games (should be easy when I have 3 turns to do nothing!!) probably with more pics since it's hosted at the T.O.s house - so wifi should be available.  Depending on how quickly my games finish I will either do individual game recaps, or possibly day 1 / day 2 recaps on both blogs. My goal is to try and improve upon my 6th place finish last year, note to self (if using slann) - diving catch provides +1 to catching accurate passes!!

And since we're into Dungeon Bowl this week...

To all his fans and followers (yes, the five of you!), dungeons lurkers in general, and freebie hunters in particular, Merry Mayhem is proud to present the ultimate dungeon endzone of all times:
- the Merry Endzone!

Now you have the perfect excuse to start your own dungeon!
Have fun!*


* By printing or copying any products from Merry Mayhem News (MMN) you are agreeing unconditionally to all terms as described in this disclaimer. In no event will Merry Mayhem News (MMN) be liable for any damage or injury caused by ingestion of these prints or by abusive amounts of fun related to it's use.
Posted by Axtklinge at 17:12 4 comentários:

From Impact Miniatures:Want to play ball in a dungeon? They are die cut chipboard and should be out in early November ($35). 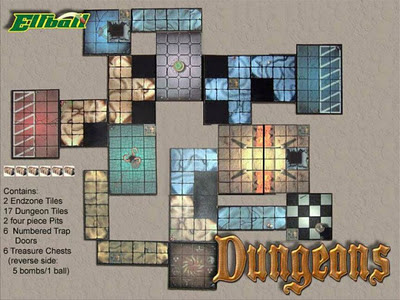 A few weeks ago while looking up for some ideas for a specific Blood Bowl model, I came across Your Lord and Master's, a blog with tons of interesting stuff!

From general wargaming news and rumours, to paper scenario pieces and models (including paper models for Blood Bowl teams and side line miniatures), there's a lot of stuff in there that can be of use and well worth to check!
Take a second to do a search in there, and you'll probably find a nice surprise or two to add to your wargaming table!

Here's a sample: The Twins Angelina and Jolee!

Kudos to fellow TFF member Adam Souza for the blog and most of the downloadable work in there!

Link: Your Lord and Master's blog.
Posted by Axtklinge at 09:55 1 comentário:

Using the cover of the "100 posts celebration" of the well established and respected blog The Chaos Manifesto, an - refered to as - feroucious, mean and hungry HotPANDA, swiped all the security and took over, in a unprecedented display of brute force and cake gore!
Rumours say there's a bounty on his head but only of its a few yards from the body.

Cant confirm all the details but I do know there's a prize in there!
Yet, you might want to check it out yourself as I might just have misunderstood it slightly...


Go for it: The Chaos Manifesto
Posted by Axtklinge at 08:48 2 comentários:

painted stuff from AbraxiS and Axt


I had nothing to do with this painting (except providing the fig itself - in some cases!!)
Here's a quick snap of three (count 'em, 3!) harlequins painted for me by others.  You can see who painted them in the caption, and likely know already (from AbraxiS on twitter) that the awesome guys here AbraxiS (follow his twitter) & Axt painted one each. The one in the middle was generously painted by Golden Daemon Winner Mike Howell (check out his blog / follow his twitter).  Thanks again Gents!!

These are added to my other two harlequins (1 needs some touching up) to form my Spire Brat pack for Necromunda (based on Anthony Cases rules). Five gives me a good start and considering how expensive their equipment is, could be enough for a whole gang - but if you know me at all I like choice!  There are at least four (count 'em 4!!!) harlequins out there around the world with some amount of paint on them and eventually headed for me!
Finally a special bonus was included in the package from you crazy Portuguese! Axt took it upon himself to build me a couple blood bowl counters/tokens.  I was surprised and excited to see there was more than the harlequins in the box that arrived.  The hand coming out of the ground even glows in the dark!  Am looking forward to using both of these at the upcoming blingtoof tournament here in Toronto (a goblin themed tournament where I am going to bring my undead with a few goblins, the orc counter will be my bribe!)
If you haven't tried it, I highly recommend trading some painting with people.  You end up with some pieces that are truly meaningful and have huge sentimental value, and you get the chance to paint up some stuff that may be outside your usual wheelhouse (I painted a cowboy and a "anime/manga" looking character for Dave of mini painting for free)

Currently on my dock, I have;

Enviar a mensagem por emailDê a sua opinião!Partilhar no TwitterPartilhar no FacebookPartilhar no Pinterest
Labels: blood bowl, miniatures, the "other" package, Tristan 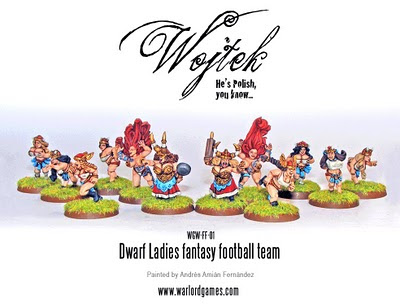 "Not content with spending twelve hours a day, six days a week sculpting historical models it appears that to take a break our sculptor, Wojtek, has been sculpting in his spare time too.

Here we have the result of many an evening of feverish sculpting - Wojteks' Dwarf Fantasy Football Team. Not really traditional fantasy, more Wojtek's fantasy.

So 12 characterful models suitable for use in most popular fantasy football games outside of the Daily Telegraph.

You've probably noticed that the name of the product is a little bit, well, rubbish. So we have a competition - whoever comes up with the name we use gets a free team!

Either email your entry to Paul@warlordgames.co.uk or you can tweet us @Warlordgames"

I´ve got "The Package",Axt gaved it to me a couple of hours ago and,what can i say?

Nothing i guess,everything i could say right now will sound so cheap. =)

Here it is "The Package": 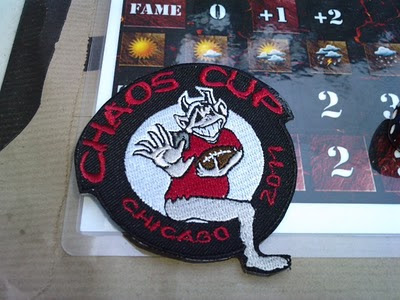 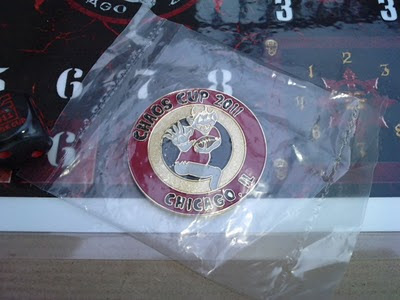 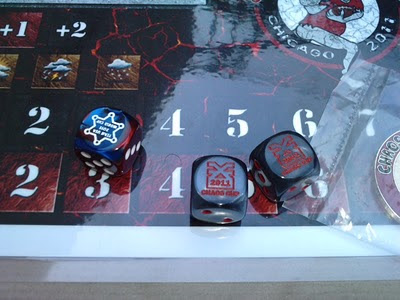 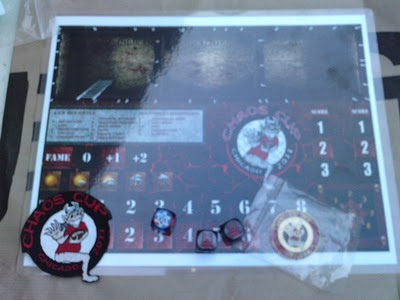 This is now my most valuable possession in my Blood Bowl world,and all thanks to Tristan...

AAAhhhh...now that i remember,i guess that me and Axt can now begin talking about "The(other)Package" ^^
Posted by AbraxiS at 18:05 1 comentário: