I've been kind of busy lately and this obviously translates into very few time to keep up with forum and blog news. Today I've finally managed to spend a few minutes checking out "stuff", and found something I believe it's very worth to give a shout out to.

"(...) Final version of the CACK Bowl pitch below.
The idea is that it plays on the club name; Coppull And Chorley Knights, and represents a jousting tilt being used as a football pitch with a nice, medieval look to the dugouts/ dungeons.

There will be a special one for the winner of CACK Bowl 2013, but we're also offering these to anyone who wants one. They'll have ''CACK Bowl 2013'' in the left hand endzone and will cost £50 for the hard jigsaw type. £45 to anyone attending the tourney.
Very reasonable considering the standard pitches cost €45 from Comixininos.
All profits (we expect to make between £5 and £10 per pitch depending on numbers) will go in support of the charity, Help The Homeless.

If you are interested, say so below and I'll PM you with payment details.

If you are attending CACK Bowl you can collect your pitch from there, otherwise I'll post them after the event and we'll cover costs (within reason!) from club funds rather than charge more or donate less."


You can check the original in TFF forum here: link! 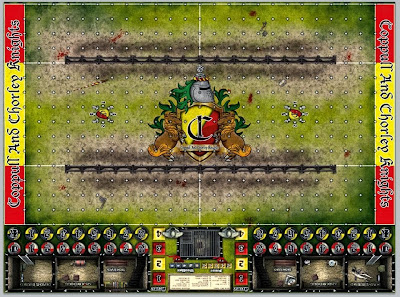 The pitch looks great, the price is quite reasonable, FF Fileds pitch quality needs no introduction, and if that wasn't enough, it's for a very worth and needy beneficence subject.
Give yourself an early Christmas treat and help those guys to help who needs the most!
Cheers!
A.

Posted by Axtklinge at 16:46 Sem comentários:

What to do with asshats?

As I've said here many times, I love the game of blood bowl and just about everything to do with it.
I belong to a very successful league, THE THURSDAY NIGHT HEROS, which is composed of guys I've known since I was a kid. Just a big bunch of friends that play 2 leagues twice a year. We mess around a bunch, but theres no cheating.

When ever we can, we get more people to join up. Sometimes it causes trouble. Like Chris...
Chris is a guy we've known since our D&D days. He's a bit of a pain. He has played in our league a few times in the past. He always quits when his team starts doing bad. He tries to cheat sometimes, and he is not above "miscalculating" his roster.
Well, he talked me into allowing him back in our club, and after last night, I'd say his chances of rejoining us is nil. Here's what happened.


My chaos team, the Deathvalley Destroyers, where playing his dark elf team, The Kill Machine. we had been forced to play extra time, due to a very close game, tied 1-1.
My minotaur, Blight Headsmasher, had gotten very lucky, and grabed a loose ball and had to make a dodge to get past one of his lineman. I rolled a 6, and Blight barrelled on towards the goal line.
It's now chris's turn, and he sends his blitzer after my mino.
I was nervously playing with a dice and just as he was going to roll for a 2nd go-for-it roll to catch my mino, I dropped the dice I was playing with. I bent down to retrieve the missing die, when he rolled his go for it roll. I then got up and his purple dice was showing "6". he said "success!". My wife was sitting there watching, and she said ,"It was a 1". I looked at him and said "What did you roll?" he just gave me a weird smile. I told him to reroll, and he picked up the die and he rolled a 1 again. He started to bitch...
I then said, "I was gonna just win this game, but now I guess I will just destroy your team, which I proceeded to do. I lost the game, but his team is ruined.

I don't like being cheated. I play our game because I love the game.
I won't play with rules lawyers and I won't play with power gamers.
My wife does'nt lie. I gave him the chance to say "just kidding" or "you got me", but he tried to cheat.
That does'nt float in our friendly league, so what I'd like to do is give chris the giant foot in the ass, but I'd rather get him to stop cheating.

We have 18 players in our league, not counting Chris, everybody gets along well, and we've had to ask people not to come back. But what to do with a guy you've know for 15 years?
Guess I'll have to think on it...
Posted by bound for glory at 20:07 3 comentários: