Prelude...
While still a bit sorrowful for once again having missed the opportunity to attend to one of my "one day I will" list of favourite big tournaments out there (the NAF Champs), the chance to attend to one of the coolest tournaments in neighbourly Spain presented it self (triggered by Connexion, travel companion for the event and fellow Bilbao landscape strider), and two successful "Go-For-It's" dice rolls after, the decision was made: Bilbao was a GO!
The 'menu' included a two day tournament in Bilbao (a city I've been meaning to visit for a long time, home to quite a few interesting museums and architectural sites such as Guggenheim or the Fine Arts Museum), filled with many, many hours of Blood Bowl, miniatures and dice rolls.

Da Killa Kans
To attend to the tournament I needed a team, and while I do have a some of them ready to go, this was the perfect motivation to get my hands on the job and paint another one. I decided to pick and Orc team I had waiting for ink for more than 10y (GW 3rd Ed. with a few extra positionals either from 2nd Ed. or converted from WFB), and while at it converted a small "Killa Kan" - the turn counter - that may eventually be of some usage as a secret weapon in the future (if the goblin inside it decides to cooperate, that is)... 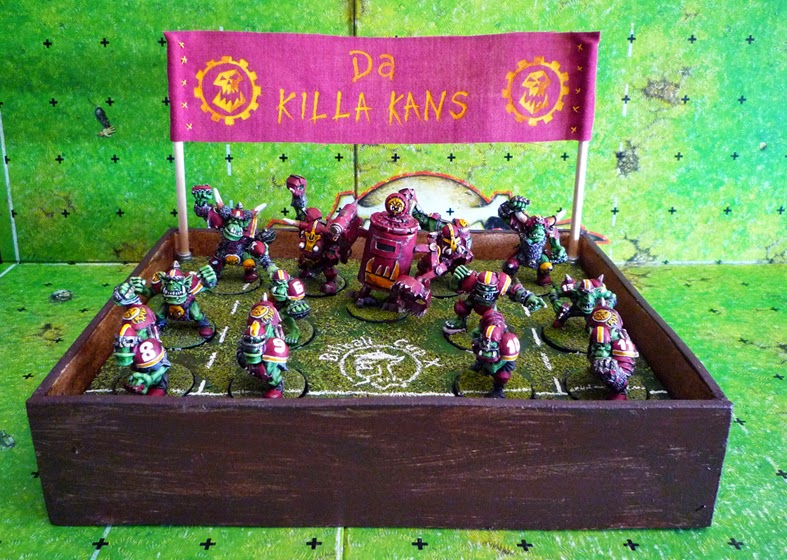 A little woodwork after, Da Killa Kans had an transport tray (quite useful for tournament environments, I may add), which was reversible during the games to allow painless and noiseless dice throwing (foamy sheet)...

Bilbao and the Casco Viejo (old town)
Arriving at Bilbao the afternoon before the day of the tournament allowed us have a glimpse of the city, going for a walk along the Bilbao Nervión river -visiting Guggenheim museum while at it-, and have a few glasses of cidra while visiting the lovely the Casco Viejo (Note: Despite all other reasons, if you enjoy good food, this really is a good place to visit).

The tournament venue
With only a couple of hours of sleep (against all predictions it was really hot in Bilbao, which coupled with high levels of humidity made it near impossible to do anything else other then drink cider...), we presented ourselves in the gaming hall.
The venue was located in an unused canteen, with plenty of light and space both inside and outside (games could be also be held outside if players wanted and weather allowed), and since it was in a residential area slightly outside the city, it was was very calm and silent. 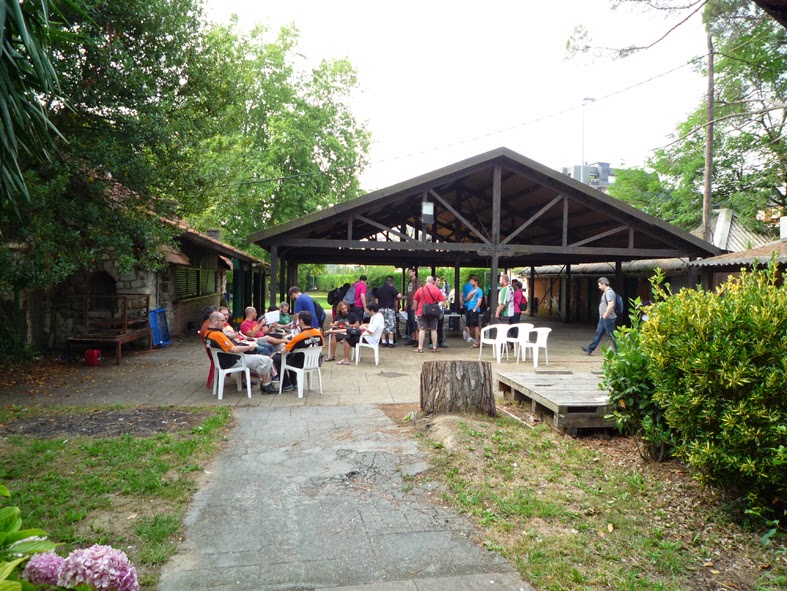 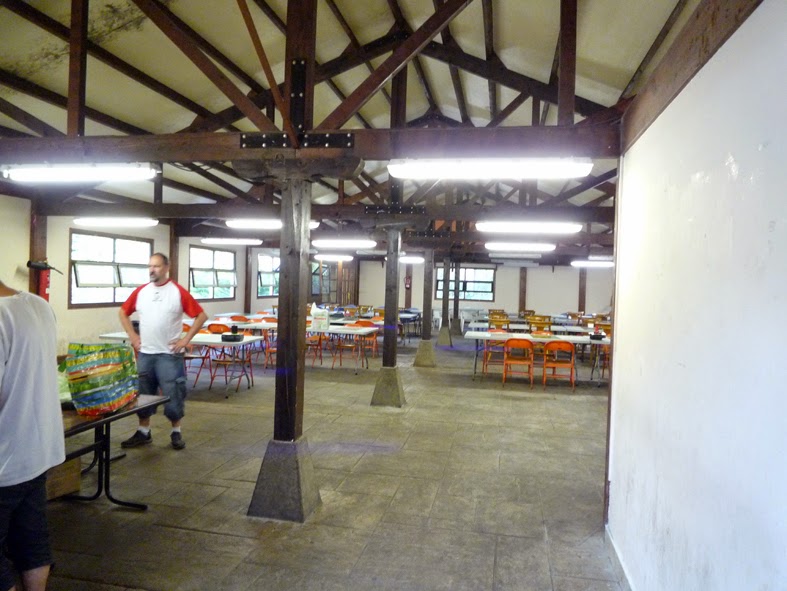 (Pics of the outside space of the venue (left), and the inside (right), of the Bilbali Cup X venue)

Despite the general thrill of the tournament the environment was really friendly, and in a few minutes it was time to start putting names into faces that we only knew from the forums (both TFF and BB Foro, it's Spanish counterpart).
Since we both had at least basic knowledge of Catalan we went for the "In Rome be Roman" approach, and despite the obvious and constant "kicks in the grammar", mingling was pretty easy (good will on both parts goes a long way), and so after meeting the organizing crew and a putting some faces into names, we where finally set for the games marathon that was to follow.

Day one games
My first four games of the tournament were true a roller coaster:
a loss by 1-2 against Barry woodies, a win by 2-0 against Kirino (that would later on would win the trophy for most Long Pass/Long Bomb passes of the game with his orcs), a loss 0-2 against Tactel Necros, and finally a win by 1-0 against Nota and his undeads.

With a 2-0-2 record in the end of the first day, I decided to avenge myself on the dinner&cider put together by the organization: 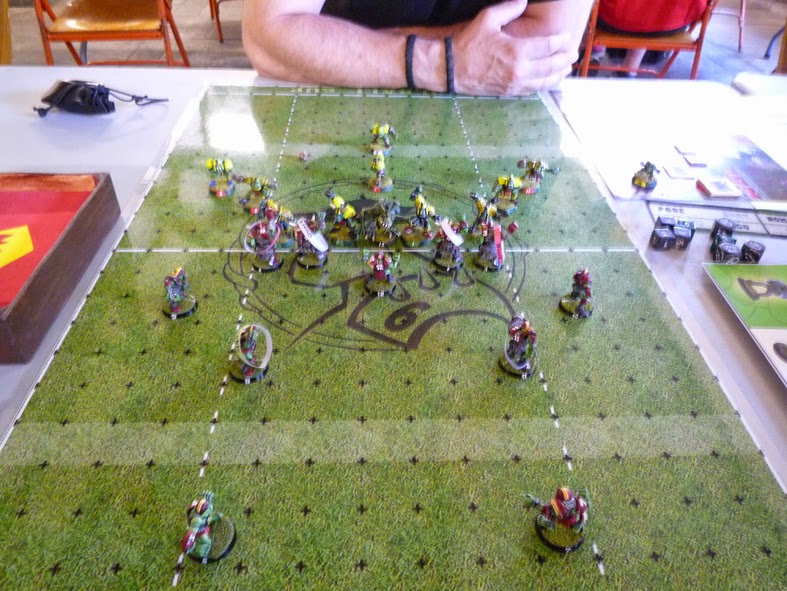 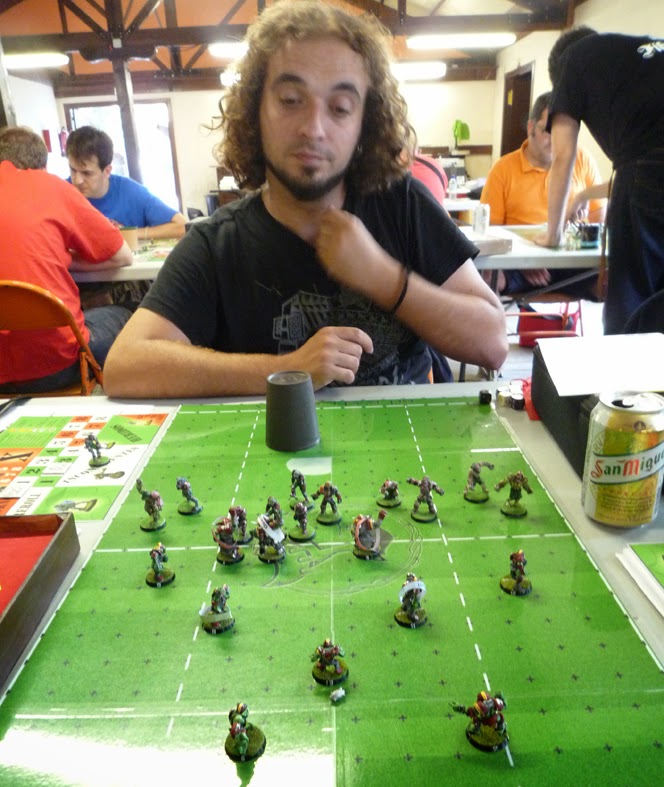 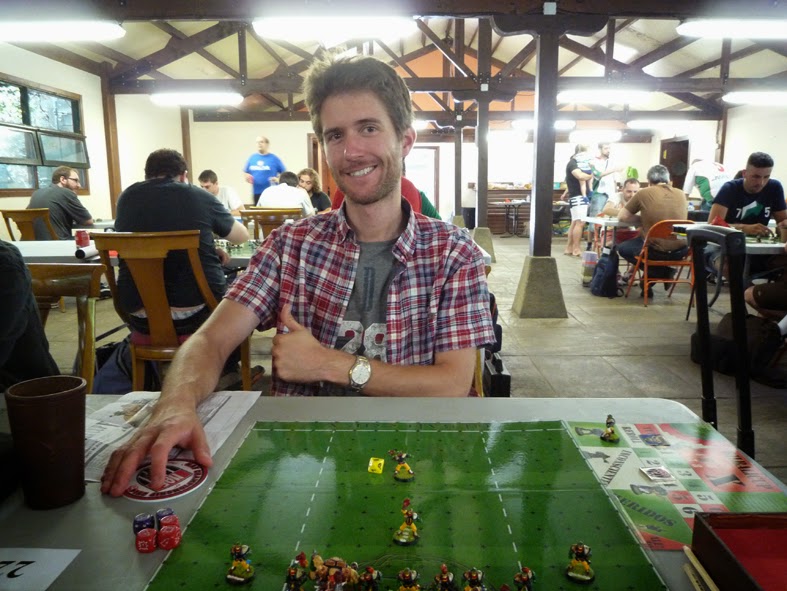 A final word of praise for the Bilbali Cup crew (Thibault, Kafre, Airtor, and all others that I may be missing), for such a great event, and for taking their time to guide everyone on the Casco Viejo pub tour during our stay at Bilbao!

PS: You can see a few more pics of Da Killer Kans team on the NABBO league blog: here.

Edit: This report was double posted on the NABBO League blog.
Posted by Axtklinge at 14:59