The NABBO Tea Cup tournament always has a very welcoming and relaxed environment if not for anything else, because most coaches are old friends and any newcomer quickly catches up with the rest of the crew.
Probably hyped by a newly converted and painted halfling team - the Brandenberry Braves (click on the team name link to check on the team), I decided to take on a challenge and coach a stunty team in the tournament.
Of course, my expectations where... ahem... low, and my primary objective was to finish the three games of the day with anything else different than the most probably 0-0-3 result!
I understand that hardened veteran stunty coaches might frawn upon such light weight objectives, but since my experience with the halflings resumed to a handful of league matches, I decided it would be wise to keep expectations low.

Pre-tournament thoughts
With the team race decided, the roster choice was for the most part an easy one: all the trees I could get my hands on, and fill the rest of the space with halflings!
At some point, some brainstorm was needed to settle for yet another halfling at expenses of extra Fan Factor, Cheerleaders and Assistant Coaches (previously aiming at kick-off table rerolls). Kudos to Tristan and Neil for the chit-chatting about this and other tabletop issues.

Enter the Brandenberry Braves!
The tournament always starts with a random draw, for the first pairing of the coaches/teams.
(Afterwards the higher ranking coach always plays the second ranked one, except if they have already faced in previous rounds of the tournament.)
No matter where I looked, there was no easy-er challenge for my halflings (I was the only stunty coach in the room) so I braced for whatever team I’d be drawn to play against and waited…

Match 1 vs Juunikyuu BBC (Dark Elf)
Right from the start I knew this wouldn’t be an easy match.
Not only I’d be playing a very able coach and former NTC championess, but also because of this particular race high agility and move that could easily run circles around my players.
My induced master chef served me well giving me a couple extra rerolls right from the start of the match, but unfortunately they didn’t helped that much as my designated ball carrier decided to fail every pick up attempt up until 4th turn.
By then – as expected, my backfield was flooded by pointy ears, that despite my players resolve in biting and kicking them in the ankles, it was not long before they snatched the ball for themselves and made a walk in the park to the End Zone.
The rest of the first half was mostly uneventful and by halftime I had knocked & fouled a couple out of the pitch, but the elves already were ahead in the scoreboard by one and would get the ball in the second part. Not good.
Second half started (thumbs up for the master chef for another two rerolls), and despite all attempts to stretch my defense to the entire field, the offense just kept changing sides running everywhere up until they already where comfortably settled in my backfield, just chilling and waiting for the ideal time to score.
Of course that could not be, and the Braves from Brandenberry pressed on (aka as gang up and foul), and to some extent it resulted as the dark elves went on and scored the second.
The last few turns of the second half shown a lovely demonstration of how perfectly launched halflings can ruin everything in the landing end, and so the match was concluded with no further developments on the scoreboard.
Final Result: 0-2 Loss, with 2-1 Cas

Match 2 vs Tumbling Rocks (Dwarf)
The draw for the second round pared me up with a dwarf team that in his previous match started losing to a human team (2-0 if I’m not mistaken), but slowly managed to slaughter his his way up into a draw with a 5-0 in the casualty department. Outch.
Needless to say I was worried.
What would it be of such tender leaves and flowers on the pitch when stepped upon by such brutes?!?
After yet another fine display of cooking by the Master Chef, consequently distracting the dwarves out of two of their three rerolls (in both halves!), the match begun.
Ball to the dwarves, a few slaps here and there without major consequences, up until one of the troll “slayeress”(sp? since it was a team of female dwarves), decided she wasn’t afraid of those big trees and when for the dauntless approach. 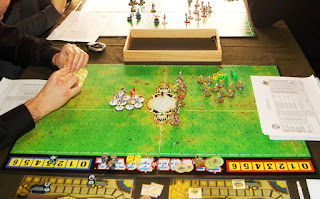 Picture of the halftime against the snow based Tumbling Rocks.

Note to self: Give a Michelin Star to the Master Chef for its deeds
Final Result: 1-1 Tie, with 2-3 Cas

Match 3 vs (Suevos Sovieticos) Norse
By now the Braves from Brandenberry had already eased their minds a bit: no matter how bad this last game against the heavy hitting Norse lads might go, the former tie result against dwarves gave them some of the respect they were looking after amongst the other players.

While preparing for the ensuing match - gorging down gourmet appetizers, the Braves found they had just won a couple of Team Rerolls to their adversaries, just because of how good the food smelled. Awesome job cook!
The ball was kicked to the Norse side, and before trying anything else, the bearded frenzied Norse decided to mow down the competition, staring with the trees.
Of course trees being temperamental as they are, took it personal and immediately fought back, stopping the Norse assault right where it started, and capitalizing the first casualty of the game: Brandenberry Trees 1- Bearded smelly humans 0!
Surprised by the turn of events, the smaller players of the Braves just stared at the trees while they continued the smacking of the opposing players fool enough to still be in the line of scrimmage.
By turn four, either by “tree whack” action, or by effective team work “ground stomp” – aka “foul”, the Norse where cut down to eight players, and stretching all over to keep the halflings away from the TD line, but to no avail as the Braves would take the lead near the end of the first half.
Nothing changed the rest of the half except for the Norse payback, punching a couple of halflings KO’ed out of the pitch. 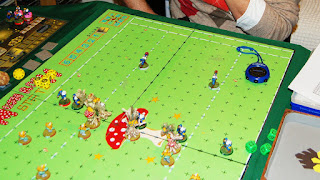 The last turns of the first half against the Suevos Sovieticos.
(Note: on the top-left of the pic you can see the crowded Dead/SI box of the Norse dugout)

The second half started with the Norse slightly outnumbered but in possession of the ball, which gave them the opportunity to organize a right wing offensive move, knocking down a pair of halflings while at it.
In their turn, the Braves where holding the Norse as they could, making time for the trees to move closer and help to stop the opponents advance.
The game kept on a standstill for a few turns with the Norse having trouble to advance or even change flank, and that’s when one of the trees managed Blitz-Out of his opponent tackle zone and Go-For-It in contact with the Norse ball carrier!
All of the sudden everything changed tactically and in this new scenario the Norse felt compelled to try and get the tree away from the ball carrier, rather than the possibly risky Dodge-Out without rerolls.
A few Norse blocks and a blitz later the tree kept standing firm next to the ball, and it was the halflings turn to do something.
And so they did – Norse ball carrier slapped down and out of the pitch by the tree, the ball scattered a few times, and lands on a open space, where it finally gets caught by and halfling that moves along with his mates to the Norse backfield.
The Norse attempt to cut them off ends up falling short, and the halflings score again by turn 6 of the second half.
The last two turns resumed in a seriously outnumbered Norse team attempt to pick up the ball, harassed by flying halflings - who simply either couldn’t land, or pickup the ball themselves, and by yet another Norse mow down by the trees, properly backed up by their smaller mates, to finish off whoever's left standing both up or down.
Final word on this match to give both thumbs up to the Norse coach and long time friend, who managed to show how very good sports he is throughout all the match, despite Nuffle’s continuous efforts to ruin his dice rolls!
Final Result: 2-0 WIN, with 7-0 Cas!!!

Award time!
The tournament was over, and it was time for the awards.
I was quite happy with the great 1-1-1 game result, but all of the sudden something else caught up my attention - the abnormal casualties sum of my last game could push me upfront to something more then a reasonably defended halfling team honor.
And when the final results came out, a really incredible surprise came along with them, the Brandenberry Braves had accomplished the outstanding result of 11 Casualties passing the closest competition by 1 Cas (the Tumbling Rocks dwarf team which we played in the second game)!
It was not a tournament record (which is 12 Cas in three games), but sure felt an outstanding feat specially pulled off with such team.
It was the cherry on the top of the cake of a great tournament day, passed among friends and playing this great game called Blood Bowl.

Hope you enjoyed the reading, and please feel free to comment!
Cheers,
Axt.


Double posted on the NABBO League blog.
Posted by Axtklinge at 13:08