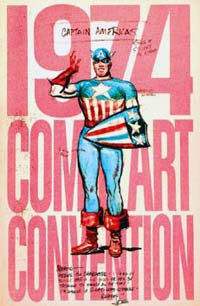 In his debut, Captain America (secretly U.S. Army Private Steve Rogers) is equipped with a triangular, badge-shaped shield made from a bulletproof alloy. After complaints by rival comic-book publisher MLJ that the design was too similar to that of their own patriotic hero The Shield, the triangular shield is replaced by a disc-shaped one.

While the origin and fate of the original shield have never been described in the original comics, decades later the story is told through retroactive continuity. According to this, the original triangular shield is given by Captain America to king T'Chaka, father of T'Challa, the Black Panther, of the fictional African country Wakanda as a pledge that the nation would remain uninvolved in the rest of the war. The original shield still resides in Wakanda as a national treasure.

A second triangular shield is given to him upon his return from that country, and Rogers uses it until given his disc-shaped shield, which is personally presented to him by President Franklin Roosevelt. This second triangular shield is kept in storage with Rogers' other personal effects after the war. It is recovered at some point after Rogers joins the superhero team the Avengers, and is kept at Avengers Mansion. It is destroyed by the villain Mr. Hyde during a raid on the mansion by Baron Zemo's Masters of Evil, and later "plucked from time" and restored by Zemo in Thunderbolts #105 (Oct. 2006). The shield (along with other sentimental items thought destroyed) are returned to Captain America. A third triangular shield is kept in the Smithsonian Institution. It is used by Captain America when he foils a terrorist attack on the museum itself after the loss of his usual shield, and is then given to him in gratitude. This shield is destroyed several issues later by a Kree alien warrior.

The shield destroyed by Hyde and restored by Zemo was eventually passed on to Elijah Bradley, the teenage hero known as the Patriot and leader of the Young Avengers.