After being spotted in the Challenge of Q'uermitt 2012, this time the NABBO Tea Cup memorabilia  - both dugout and dice - have been seen, this time in the NAF Championship 2012!
Check out those yellow circles in the image... 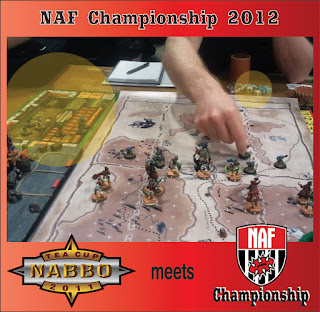 Apparently, out of 182 coaches playing in the tournament, the first one that sits to play with our friend Neil was using a NABBO TC dugout and taking the NABBO dice along with it!
Note that Neil is himself a (hopefully proud) owner of a complete set of NABBO TC collectibles.


How about that for a coincidence?
:)

As promised, after checking our sources, using Neil's tip, and consulting a powerful oracle in distant Albion lands, we decided to use our most advanced device of warp transmission and send a pm to ceetee! He promptly answer and kindly sent us this pic taken in the NAFC with him holding... you know what! 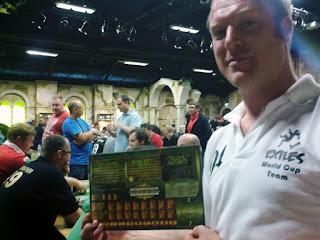 Kudos to Neil and ceetee for immortalizing the moment!
Posted by Axtklinge at 20:43

Hi I think his NAF nick is CeeTee and he was using a Skaven heavy Underworld team with Skitter Stab Stab. Pirates won 2-1 despite an awesome multi dice no reroll one turn throw team mate touchdownfor the Underworld.

I suspect you're right Neil.
I've already pm'd him to check, as he had mentioned he intended to take them beforehand.
Thanks for the tip!
:)