As noticed here in the MMN last week, I was absolutely delighted to find out that my entry to this great FF-Fields contest, had won the 1st place in the category that I've applied for (Best Original Concept).
The amazing quality of the teams there, (such as Paul's Terracotta Tearers for instance), made me even happier with my chubby little Three Chile Burrito Bandits, an halfling team converted to fit an Old West/ Tex-Mex theme, where the trees... well, they HAD to be cactus.... 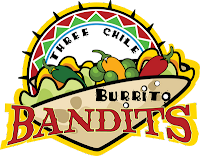 No one really knows, and many stories are told amongst their fans but maybe, if there’s some little pieces of truth in each of them, we can glue them all together and shed some light on how it all begun...

Once upon a time, there was a bunch of Halfling kids that spent most of their free time (*read ‘not eating’), playing cowboys and reading his tales from the distant lands of the new world.
With those plays, it grew an indomitable will of stretching out their borders (much to their parents worry), and the resolve to see and explore other places often lead to trips into neighbour settlements with countless adventures.

By then they were fondly known around as “The Bandits” not only for their fitting outfits but for the ‘outrageous’ assaults on their parent’s kitchens where they would gather enough supplies to set off on yet another quest.

One day during the spring festival,  escaping once again from their village, they’ve managed to attend to an itinerary event that was to change their life’s for ever: an exhibition match of blood bowl!
The Nordland Rednose -fierce bearded warriors from the north-, with their horned helms and tattooed body’s, were facing the agile All Black Owls, a team of ladies from a far distant land across the sea that did not seem a bit worried for facing such brutes.

How this match indeed pushed them into Blood Bowl or effectively influenced their game play is of course highly questionable, but to this day one of their fans mostly appreciated cheering songs still shouts:

“Short blows, don't beat too high - but hit like a norse all right!
Side step and Dodge don’t rest - they’ll fly into the End Zone line!“

Oh, almost forgot, why the ‘three chile’ you ask?
Oye muchacho, because no matter how tasty they look, sometimes they reeeealy sting! 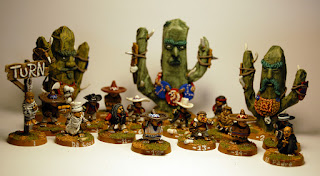 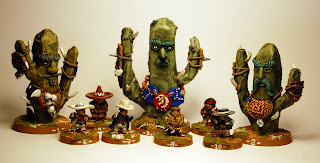 ... and the back row was complaining for not showing up properly! 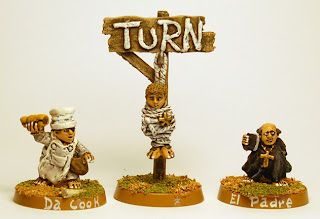 Here you have "Da Cook" (holding a burrito), the turn counter (featuring the local sheriff all 'pretty & tied up'), and since the Apothecary wasn't doing his job all that well, they've opted for a priest instead! 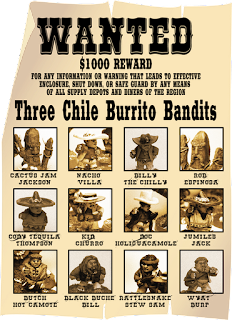 Of course all those "notorious deeds" tend to backfire sometimes...

Now that you already know what their made of, beware and keep your food well hidden and locked, or else...

Super-fantastic team and a well deserving winner. Happy to come second to a team of this calibre, and brilliant that it was yours :-)

can't wait to see the pitches you guys get. at that point you will need to make some custom dugouts!

Thanks for your comments guys!
Glad you've liked them!
:)

I'm impressed with the quality of the painting and conversion work on these. This is quality stuff!