This one is my doing... Zvarr Black Death!!!

I really couldn't miss the opportunity to have a go at this competition by so many reasons that I'll only mention two:
1- I love scratch build stuff! I love the sketching, the planing, the bitz hunt, and finally put it all together. Sometimes even more than using them - this of course does not apply to BB stuff, but there are other games out there too! Or so I hear...
2- Deathroller Race 2000 is a very cool game and I didn't had enough DR's to promote (illegal) races in my neighbourhood! And then there's Neil - the mind behind DRR2000 - , which also is a very cool guy and more than deserved this token of commitment and respect!

Deathroller WIP process:
I've decided I wanted to try to build a DR without too much bitz, just to prove my point that a bit of imagination can do wonders (as in "cut the excuses and just build your DR" kind of thing), and while the result is no 'wonder' at all, it can be easily identified as a Deathroller - or so I hope, and so I have achieved at least 50% of my objective. No that bad.
I used a piece of a wood branch, leftover plastic from sprues (exhaust pipes), bottle tops (from wheels), cardboard for the engine, and a leftover torso from a dwarf std. bearer, and a drum from a chaos sprue (helmet).
Some glue and green stuff later I had the beast ready for priming.
And since the top had seemed like a Chaos Dwarf thing I went for it, and painted it like some sort of dragster, with flames and all.
Hope you like it! 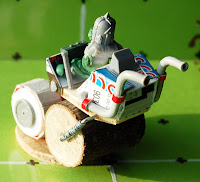 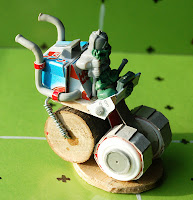 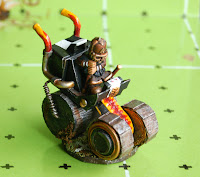 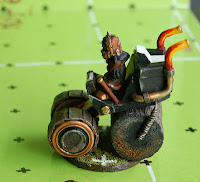 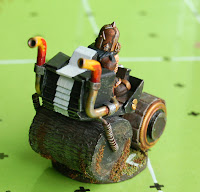 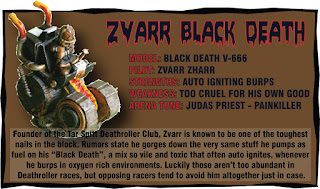 great job buddy!! some awesome green stuff work in there, wish I had those kind of skills, I am struggling with green stuffing a goblin ear!

Thanks mate!
It's not that much of a job, since I already had the torso and most of the helmet in plastic. I'm sure you'd pull that off just as easily with a bit of effort, like I have.
:)

What a cool kit bash and great paint job. Thanks for the comments too.