Hi, like CeeTee I made the pilgrimmage to the NAFC and although the actual Blood Bowl from a results and dice rolling perspective was a bit of a disaster the weekend itself was still a great experience and I had a fun time.

My friend Thorsten made the trip for the first time and we flew over together from Duesseldorf to Birmingham where we were met my friend Peter who had driven over to England (via a Blood Bowl tournament in France) as part of his two week holiday. We then drove up to Sheffield where we were being hosted by my friends Pete and Anna.  Both Pete and Anna played in the NAFC last year but Anna finds 6 games in two days to be too much, so this year she stayed at home and watched the cricket instead.

Anyhow as you'll know the venue was changed for this years tournament, one of the main benefits for those who don't have, handily placed friends, was the co-located hotel offering good rates.  Here it is from the car park: 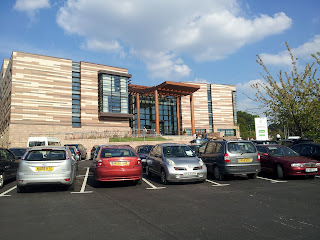 The conference centre itself is just out of shot on the righthandside of this picture.  Inside was very nice, with a bar and adjoining lounge areas, plenty of toilet facilities and a gaming hall that looked like this: 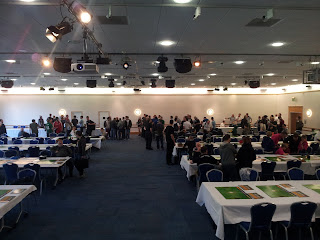 Here is a second chance to play spot the (non) geek: 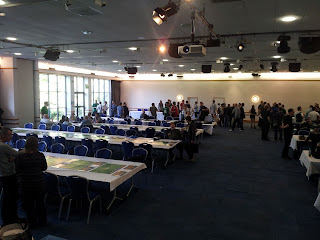 Each day we were provided with a packed lunch, which was fine, nothing outstanding but providing enough fuel for the following games,  What was nice though was being able to go outside sit on the grass and enjoy the fresh air and sunshine between games.  I know, I said sunshine and I'm talking about England but it's true I tell you!!!

There was also a hot meal on the Saturday night included in the price of the ticket but Thorsten wanted to see Warhammer World, which is less than a 15 minute drive away, and all four of us wanted to see the Champions League Final that evening so I can't comment on how good, bad or indifferent this meal was as none of us even saw it.

From the games point of view I took my Undead and first up faced off against .... Undead.  This was the only game of the weekend where the dice wanted to play ball for me and even this started with my Mummy rolling Block and Skull first block having to reroll it and getting double skulls.  Second turn Ghoul failed to pick up the ball and burnt a reroll whilst failing but my armour rolls made up for it and I won the war of attrition 1-0.

The second game I played a very nice American gentlemen by the name of Aron (Aaron?) who had come all the way from Nebraska to play six games of Blood Bowl.  He played very well and most of the key rolls went his way so I lost to his Dwarves in a typical 1-0 grind. 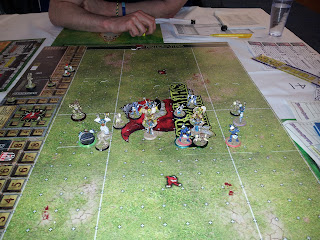 Two nicely painted Egyptian themed teams facing off on a nice pitch. Unfortunately my dice descended from bad to worse and I lost the game by the odd touchdown again.

Here's another shot of the boys in action: 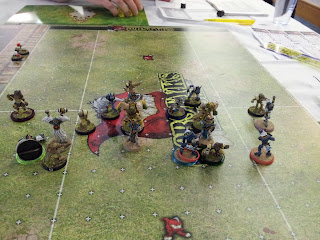 The following day I played Amazons and if anything the dice had taken a turn for the worse with the added bonus that he was failing nothing.  However I dominated the game and would of won but for a double skull final blitz free when literally any other result would of brought me victory.

Lizardmen were next with the strangest set up I've encountered for this team.  Six Saurus plus Silibili and he'd given them Guard as a skill in each round so I was facing off against seven ST4 players with six Guard but only one with Block and the team had no rerolls at all.  However he appeared to of sold his soul to Nuffle for most of the game.  I scored in turn 8 and he had a go at the one turn touchdown.  Even though I'd set up to defend against this possibility he managed to make about 20 dice rolls with nothing going wrong and it was 1-1 at half time.
More crazy dice rolls prevented me from scoring a winner and left him needing to pick up the ball with a Skink, Hand off to a Saurus and complete two GFIs for what would of been an outrageous win,  Fortunately for me he did the traditional thing and fell over the line.

That left Wood Elves played by a nice Geordie lady for game 6.
It was one of those games where the ball just refused to be picked up by the Undead and the Wood Elves kept nipping in and running off with the damn thing!  Although I was finally getting some decent armour/injury rolls and slowly taking Wood Elves out of the game I was 3-0 down before it could make a difference.  I managed to come back to 3-2 as by that time there were only two WE on the pitch, and they were lying down pretending to be dead, but ran out of time and that was that.

We had a bit of a nightmare trip back with the Channel Tunnel claiming not to sell tickets at the gate anymore and some dramas with the ferry, BUT all in all it was definitely worth it and the new venue has to rate as a success.
Posted by Neilpferd at 22:06

so jealous. maybe some year I'll get over there for this event.

very odd lizardman team. no block, no rerolls? talk about tempting fate. but isn't that the way of it, every roll goes right and then trip in the last square, go for it to score and fail.

Glad to hear you've enjoyed the whole event/weekend/venue. It sounds like a really fun weekend with all those BB looneys in one same place!
:D

Thanks for sharing!
A.