Thought you all might like a team photo of my newly completed Greebo Chaos Dwarves, the Darkland Decimators. 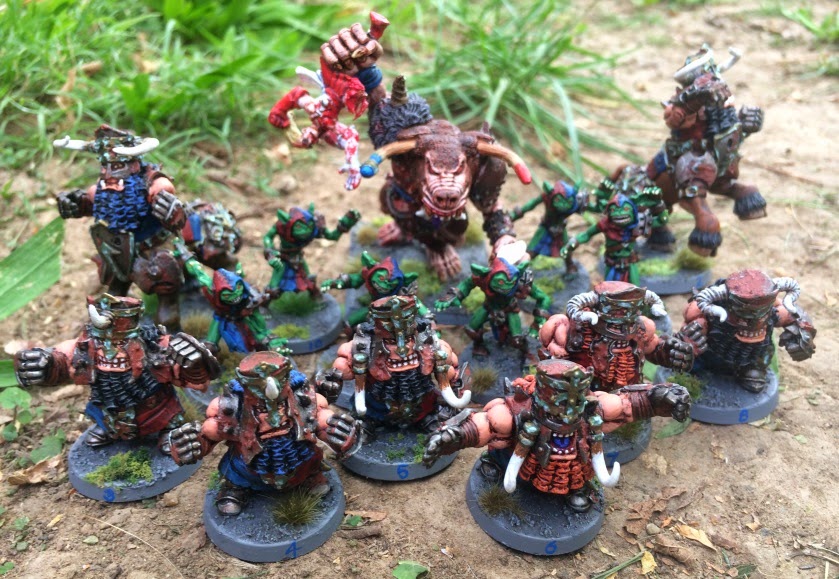 Check out all the players here:
http://tasmancave.blogspot.com.au/2014/04/darkland-decimators.html
Posted by Paul O'G at 12:25 2 comentários:

Hi all, now you have picked yourself up from the floor at the shock of me posting on here again I can continue.......

I was at the Dungeonbowl XI (a now annual pilgrimage) which this year had new organisers (thank you Marian and Thomas) who had to cope with a relatively short notice fast ball from GW and find a new venue also. Part of that was getting enough pitches together so to help out I lent them some of mine. Which is how the NABBO dugouts wormed their way in to a 'starring' role in the final of one of the Bloodbowl Majors! The venue wasn't ideal for such a large tournament and it might well be the only time it's held there. Nevertheless I believe most people had a good time, I did despite my continuing curse from Nuffle. Here are some pics I took.

Tipus Minimus finally made it into the first team!

Tipus Minimus, the mutated gobbo, finally made it into the first team of The Pitch Praetorians!


After an rough start at the NABBO League pre-season coupled with a few injuries in some not-so-friendly matches, he managed to prove it's worth (ahem.. stabbing the competition) and was accepted into the first team. 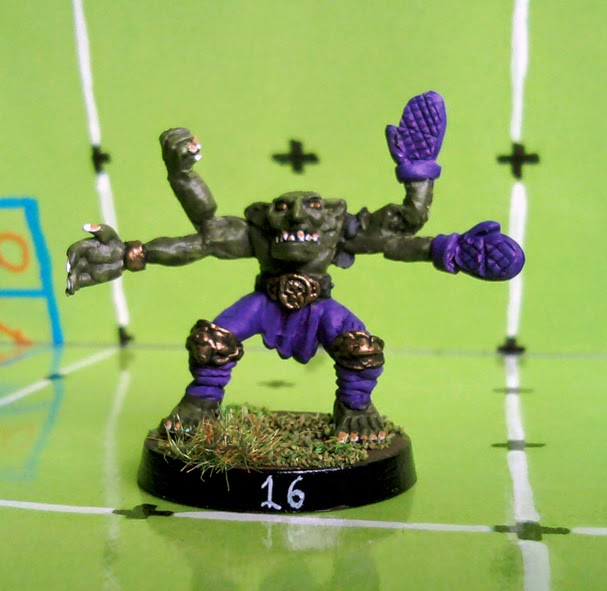 Tipus Minimus came from a land far (very far) away, to play in the NABBO League after the 2012 draft of the "GHAG overdrive contest".
Cheers to Tristan for it!

Double posted from the NABBO League blog
Posted by Axtklinge at 19:57 2 comentários:

We can't go back

My mom passed almost a year ago. Cancer.
As my mother was living with my sister and brother in law before she passed, she had put quite a bunch of my kid stuff in storage along with things from my brother and sisters childhood. You know, grade cards, pictures, art, that kind of thing.
All this was returned to me last summer. I just this last weekend got around to looking through it.
I found a big box of my old role playing stuff. D&D started it all for me, in 1977. A bunch of RPG games followed. Too many to list. There were books maps, the odd dice, bunch of other stuff.

I also found what I believe is my groups first blood bowl league roster. The date says 1989, so 2nd Ed 18 teams, not too shabby for a 2nd Ed league, huh?
When I look over the roster, I think back to a bunch of good times. and a bunch of good friends who, for whatever reason, are no longer in my life.
Who could forget Billy "dumb dumb" Degrote? He's the guy who gave us the club name "The Thursday Night Heros". Or Shawn N. who just disappeared one day? Or Shawn L. who joined the army, and for some reason never contacted any of us again? I had a falling out with John K. who was, for a while my best friend. We went on a road trip and when we got back, his parents had a) decided to get a divorce and b) John had to move away with his father. That was a tough one.
Bob Wagner was another dear friend. He was into the original Teenage Mutant Ninja Turtles and I loved Judge Dredd. We both loved punk music. We went to shows and we were always in a fight with someone at a gig (we were both skinheads). We would drive far and wide in serch of a cool game store or music shop. Comics, too. I just found his phone number online and I called him. We planned on getting together for a game of Bloodbowl (he hadn't played since 2nd Ed.), but I live about 90 minutes for him and he has a big family that takes up a lot of his time.
And many more. Phil, Scott, Berny, Joe...

I guess I'm getting old. I for some reason find myself thinking of those guys. When getting together on a Friday or Saturday night and playing some game until the wee hours was a great time. Even the guys who were only in our gang for a short time, I think I miss them, too. It could be, that life has gotten me down this last year. I lost my job due to an injury at work. Maybe because my sons cancer has returned. Maybe because I don't see my brother and sisters much. I don't know...
Life gets away from us. I sometimes have a strong desire to look these old friends up, contact them and tell them I miss them, but that's kinda weird, right? So i won't. But I want to, before we all get too old.
Posted by bound for glory at 22:48 2 comentários: 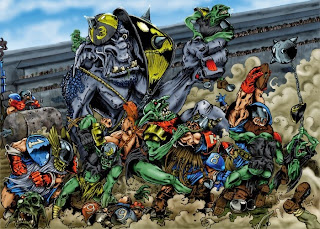 These are just sad news for the Blood Bowl players around the world  :(

"This is a very special episode of Zlurpcast. No jokes here. We somehow managed to get a former higher up at Games Workshop on the line to tell us the REAL future of the game we all love, Blood Bowl. I’m still in shock how we managed to get this interview. Many have speculated about a new release and/or a new set of rules. What you find out about the future of Blood Bowl in this interview will blow your mind to tiny bits. Listen now, before the Empire forces us to pull it down!"