(Third and last update on the NABBO Tea Cup 2011 article)

The day of the tournament has come and gone...

Its impressive how fast an entire day runs when you're having a blast! (And that's probably the best way I find to define how the whole tournament went!)
Having said that, and despite all the fun of getting together with some old league friends, all the games were quite competitive and the "award winners" were only decided in the last game round of the day. I was glad to see how, apparently (and much like riding a bike), old timers didn't forget how much fun it is to roll Pow's against your opponent's team, and so they did as much as Nuffle or the rerolls allowed!
Everybody loved the "Tea Cup 2011" official dugouts (which includes a weather and kick-off table presented by Merry Mayhem News!) but the stars of the day were the custom ivory/marble NABBO dice made by Chessex! Thumbs up to Joseph for such amazing work. 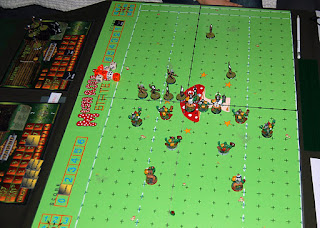 Pic 1: Clockwork Green (orc) preparing the kick-off to the Black Ferns (Amazon), only to see them show off their playbook and equalise in the last three turns of the match. That would turn out to be the only TD conceded by the greens in the entire competition, feat that would assure them the top place in tournament! 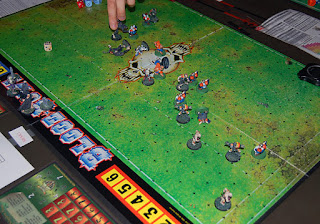 Pic 2: Here the Rockandrolla Steel Heads (dwarf) stretch out through the entire field, trying to hold off the Deep-Six Diggers (Necromantic). The resilience of the short fellows kept them in the game for a long time but Necro team ended up capitalising on their fast movement, finishing this game with a 2-1 win. 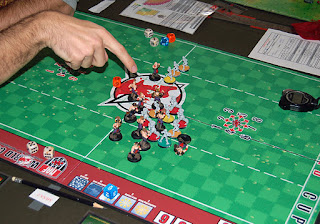 Pic3: The (induced by brew abuse) brawling style of play of the Lanshor Wolves (Norse) fell short against the dodgy game of the Prowling Goddesses (Amazon).
Winning by 2-1 the lady's proved to the horn-helmeted norse that they could pick and stand a fight as good as any half-naked men, theory that proved to be right almost 'till the end, when they faced the half-naked orcs of Clockwork Green loosing by 0-1 in the end of the second half. 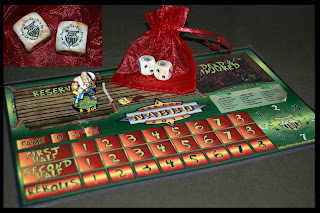 Pic 4: Here's the official stuff: our custom NABBO "Failing Go-For-It's Since 1999" dice, and "Tea Cup 2011" dugout! We might have a couple of them left to sell if someone is interested. By the way Zug is only there for scale!

One final word...
Unfortunately, due to some work related problems that required his presence, Abraxis was not able to attend to it as we all wish he did, but we will no doubt have a ton of other chances to welcome him and his newly painted Midgets!
Posted by Axtklinge at 10:07

I am interested in dice/stuff!
Send me the info!

Sure, I've already mailed you!
Thanks!