I've been away this week (more on that later) but home in time this week for Miss Lass's 15th Birthday celebrations, and go with Right Stuff to the biggest Blood Bowl competition in Australia: The Eucalyptus Bowl! (http://eucalyptus-bowl.doubleskulls.net/index.php)

Despite that I am more an Agility style coach by style (not that I've ever played pointy ears though!) I decided I should give my Terrorcotta Tearers their first outing.  Actually, this was the first time I've ever played a Khemri team, or indeed played in any tournament.  So it would all be a good learning experience.  We also caught up with a bunch of guys we know, including Paul Deacon (who came from NZ to play!) who told us all about his experience at Three Die Brawl in Ohio, which sounded fantastic. Anyhow, EucBowl is a 1.15million resurrection tourney with no double skills allowed.  My team roster was:
EucBowl is a 6 match Tourney held over 2 days, but as I mentioned Saturday was Miss Lass's birthday.  However, they do allow 1 day entries so we did the right thing and spent Saturday spoiling our young Lady, then had ourselves a Blood Bowl Sunday!

Game 1 vs Highgarden Hornets (Humans)
This was one of the most beautifully painted teams I have seen - wonderfully detailed in yellow and white. I gave away +2 FAME, Weather was nice, and I won the toss and elected to receive. I got under the ball, formed up into a cage and then started to march down the pitch. 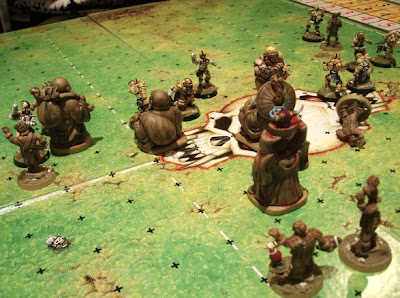 The stand firm on the Tomb Guardians was fantastic and though it cost me some casualties not having mighty blow it kept my cage nicely intact - especially against the Ogre (who had Break Tackle and was hard to hold down). It took me the whole fist half, but I finally ground down to the other end to be 1 up at half time. 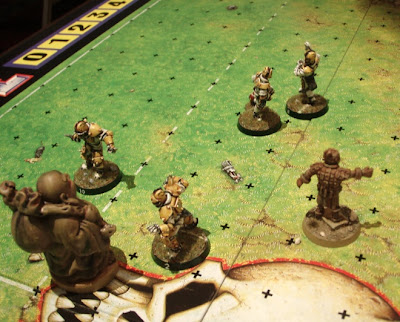 The Hornets came back in the second half with a vengeance, but my Tomb Guardians got their blood lust up and started really taking some pieces off the pitch.  When the Ogre departed badly hurt the humans really couldn't stand up to the strength of the Tomb Guardians at all.  I managed to turn the ball over and started sprinting to the end zone for a second TD- and yes he tripped over the line!  The sting was taken out of that by winning 1 nil though.
Game 2 vs Southern Country Bloodletters (Ogres)
I got +1 FAME for this game, the weather remained nice and once again I won the toss and elected to receive (it worked last game so what not try it again?).
The ball stopped bouncing just inside my endzone and 5 nasty looking Ogre bore down on me - quite intimidating!  He had taken Guard on two of them (which was just nasty), Multiple Block, Strong Arm, and Juggernaught.  I found this tough to counter with my four Tomb Guardians and it was a very different game to the first one when I could mass strength whenever I wanted.  But the Ogres were determined to get some blood and really wailed into the tombs, so I broke a Blitz Ra and 2 Skelies down the right widezone in a cloud formation and did something unexpected - launched a long pass into the middle of them from my backfoeld!  Typically, it was inaccurate, but it dropped in the middle of them half way in the opposition half.  The Ogres continued to beat up my Tomb Guardians (supported by a horde of snotlings) which gave my guys the time they needed to pick up the ball and move down to the back corner.  4 turns to go in the half and I was having a real dillema - grab the score or delay and risk my Tomb Guardians gettting killed?  Amazingly, they stood up to all the pummelling and fouling, with nothing worse than a stun so I prayed to Nuffle and stalled it out to score on Turn 8 with all Tomb Guardians still on the pitch.  He still has a turn 8 to go though, so I set up for a 1turn TD defence and was fortunate that the ball dropped into the back corner in the endzone so he just wailed on the skeletons.
The second half started with Ogres getting a Quick Snap and after a bit of beating around, a snotling got tossed to score in turn 3 and make it 1 all.  I received and drove up the rightwide zone.  I broke through pretty well with a cloud formation holding out the Ogres and hitting any snotlings in range.  I was ready to turn burn again when the initiative shifted dramatically to the Ogres when they KOed two Tomb Guardians in a single turn.  That got me pretty rattled I must admit so pushed it over the line to be up in Turn 5.  That gave the Ogres 3 turns to equalize, and only 1 Tomb Guardian returned from the KO box...
The opening turn of the next Ogre drive started badly for me: of the 3 skelies on the line of scrimmage tow were KOed and 1 went to the casualty box!!!  The snotlings grabbed the ball, got it up to the Ogres and another snotling went airborne.  He landed POK, but because he had scattered backwards 1 square he ended up 1 spot short of the endzone after sprinting.  I got a Blitz-Ra back there for a desperation block and got the *Pow* result I needed to put him down.  The ball scattered out and got tossed in in my back field 3 or 4 square in them the TD line with 1 turn to go.  I decided to play it safe and out 5 tackle zones around the ball, only to have an Ogre throw another snotling into the fray.  Amusingly, the snotling landed on the Ogre that had rushed down to help and then ricocheted around to knock down two of my players as well!  But time was up and I took the Win with 2 TDs to 1.  Phew - right down to the wire!


Game 3 vs Raging Wood (Wood Elves)
Having unexpectedly pulled off two wins for the day, I was amazed to find myself on the 'top table' for the Sunday only players.  Against Wood Elves? Right Stuff summed it up well with a smiling "Well it was a good run while it lasted" (note that this Wood Elf team had just destroyed Right Stuff's team, but he can write about that later).  We tied for gate this game (thanks to my 1 Fan factor!), the weather stayed nice, and yet again I won the toss and elected to receive (third time is a charm right?).
This was a tough, tough game.  I drove down the centre in my cage formation, only to have those darn wardancers leap in twice to knock down the ball carrier (I hate those guys!)  I managed to recover it each time though and get right up to striking distance only to get pounced in the end and fail to score.  It was really tough elf defence and I just couldn't smash my way through.
The second half started and pretty soon I found myself resetting to receive after some typical elf magic and a 2 turn touchdown.  1 nil down, all the KOed Elves came back and I was on the wrong end of a Blitz.  Nuffle's luck was turning.  I got turned over by a Wardancer once again and then was defending again, determined to hold him to only a single TD win.  As he broke though a channel I hadnt seen though, I got my chance for my own magic - blocked down the ball carrier, some clearance blocks with other players to make a lane (expending my last reroll to recover from double skulls) and then the hard stuff Khemri dont do well - pickup with Blitz-Ra, handoff to a Throw-Ra and a run down and across field.  A skellie ran down after him to provide some cover.  The elves got a catcher and a linelf back there to jam me up and it all came down to the last few moves with no reroll left - I got another player up there to cancel the assists and the Throw Ra had to blitz his way free - Double Pows!  Just have to sprint twice to score - surely I would be tripping over the line again? No!!  He scores and the game finishes as a 1 all tie!!!


So 2 wins and a Draw!  WoW!  Not too shabby given that I showed up and just hoped to to go home with 3 losses (but quite prepared to, new team and all).  And the same record for my final opponent too...   After some kinds of number crunching by the admins, I was surprised and proud to be awarded a medal for the Best Sunday Coach!!!! And my prize?  A band new Greebo Chaos Dwarf team!  Totally Sweet! 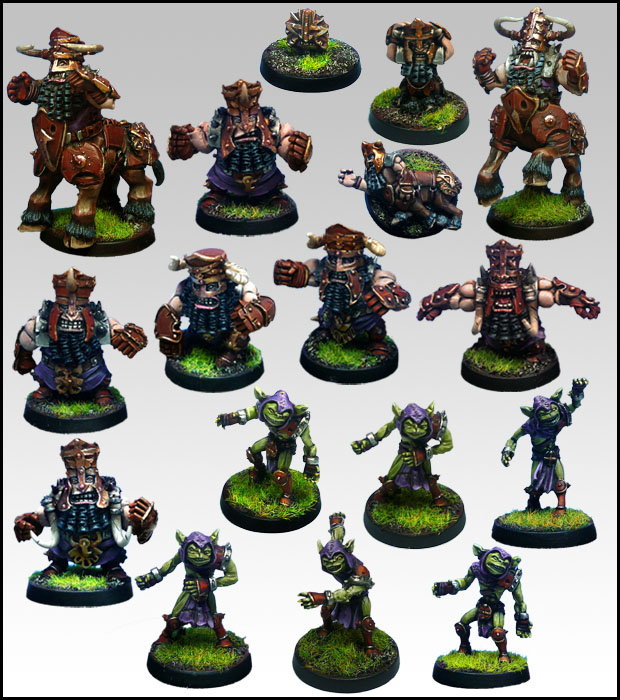 A massive thanks to all my opponents - as you can see it could have all gone the other way if Nuffle had decided - and to Andrew the EucBowl organiser who put in a huge effort to put on such an awesome Tourney!\
Posted by Paul O'G at 12:27

WoW!!!
Not only they look cool, they also know how to play!!!

Congrats on the award, and thanks for a great report!
Can't wait to see Right Stuff report too!

Congrats, well done Khemri not an easy team to play with (or against!) so excellent job.

Amusingly, the snotling landed on the Ogre that had rushed down to help and then ricocheted around to knock down two of my players as well!

The rules state only one player can be knocked down by a thrown team mate "If the thrown player would land on another player, continue to scatter the thrown player until he ends up in an empty square or off the pitch (i.e. he cannot land on more than one player)."

A truly epic prize too, you must be thrilled. Guessing you have not received your team too cool board yet - as that would've been the only thing to make this better!

...forgot to add that (as you've stated) those Highgarden Hornets (human team you played in the first game) looked fantastic!

Gratz on the win buddy.

And a even bigger GRATZ because you´ve played with Khemri who are nearly incapable of picking up a ball...lolol

Gratz on the win buddy.

And a even bigger GRATZ because you´ve played with Khemri who are nearly incapable of picking up a ball...lolol

Thanks guys - a week later and I'm still all smiles! Cant wait to give those chaos dwarves a go too :-D