Right Stuff is writing up his match reports for the tournament, but in the meantime I'll bore you briefly with mine. Actually, I didn't enter the tournament per se but helped out the Commissioner with the seemingly endless array of things to do.  However, there was an odd number of coaches so I stood in for two matches so there wouldn't be a 'bye' round.

I was there for a giggle and a bit of fun, so what did I play? Ogres.  Not just any Ogres though, here was my 'death or glory' 1 million gp team build for my Capital Crushers team:

6 Ogres,
5 Snotlings,
Apothecary
and No Rereolls! 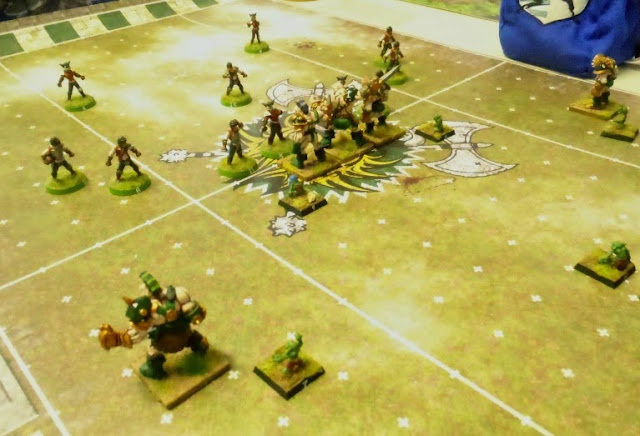 Game 1 vs Cody's Vamps This whole game was played in a Blizzard - the first time I've had to deal with that!  The Vamps elected to receive and came scooting down the pitch with the ball, when  Blood Lust kicked in and an Ogre punished the ball carrier badly.  A Snotling scooped it up and was tossed down the pitch to  scramble into the end zone- 1 up to the Ogres! The second half saw a bunch of Thralls entered the KO and Cas box and the vamps got isolated, but impressively did not fail a single blood lust roll all half.   Surrounded by big bodyguards, a snotling ball carrier made it over the line again to put the Ogres 2 up with just 2 turns to go.  The vamps lined out for a push down the left side, pulled off a good passing play and squeeked over the line as the siren blew. A 2:1 Victory to the Ogres! 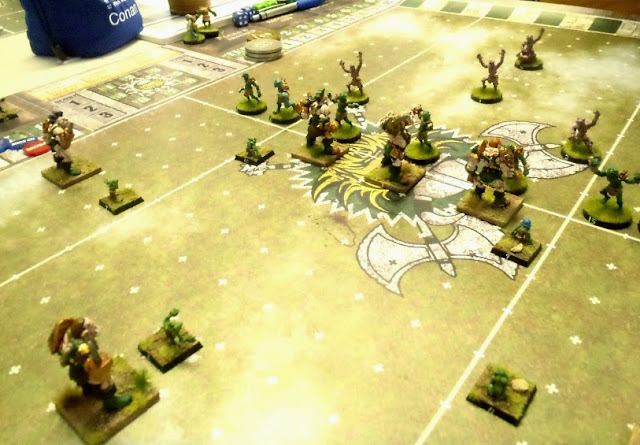 Game 2 vs Conan's Slann Just as things went well for me in game 1, this was where Nuffle took his revenge and my crafty opponent took every advantage of it.  After a promising start Badly Hurting the only Slann Blitzer with a well timed snotling foul, I was totally shut down by the leaping frogs who made every advantage of Boneheaded Ogres and their lack of TZs.  After they scored first, I managed to fling a snotling during play to equalise, but the Slann scored again ebfore half time.  In my turn 8 I pulled off a dazzling array of rolls (no rerolls remember?) for the 1 turn score, only to have Nuffle spit in my face when he tripped over the line! The second half went worse, with no casualties coming despite my best efforts and the Frogs scored twice more.  In the dying stages of the game I took 3 Slann off Badly Hurt (one was done by a Snotling who took down the Slann Linefrog who blitzed him and ended up with a Both Down result - Awesome!)  but it was all too late and Conan took a well played 4-1 Victory.

At that point I wasn't needed any more as a sub coach and I scuttled gratefully away with my 1-1 record proclaiming that  "Real men don't need re-rolls!!!"
Posted by Paul O'G at 19:48

Nice team pick mate!
It takes a lot of spirit to play those, let alone without rerolls!
LOL

Funny enough just yesterday I listened to the latest BD podcast (#15 I suppose), and they both commented on how they dreaded to play against Ogre teams for several reason.

Well now that I have a NAF rating with OGREs, I can move on to Halflings next time :-)