First post of the year! :)
Hope you’ve all had nice festivities!
And possibly some free time to have a few games, or at least a couple of hours to work on some hobby related project (since we “table top gamers”, seem to always have a bunch of those, carving for our attention).  Moving on…

As a kid I used to be a big fan of “Fighting Fantasy” books (with those fantastic stories with plenty of monsters, dungeons,… and dice rolling!), and despite only having a hand full of them (for some reason they weren’t that easy to find), I really enjoyed the creepy atmosphere they created and all the forbidden secrets they always seemed to hold on the turn of every page. I’ve always loved to read, and one of the most amazing things about those books, was the fact that you could actually have different paths and endings, according to the options you took during the read. A bit like the table top ‘wargames’ or ‘fantasy sports’ games we play nowadays, where the ‘story’ of the battle/game is built along the way.


Why did I bring this up? Well, during Christmas week I’ve came across a “clearout” sale of a book store, found one of those I don’t own, quite cheap, so I brought it home with me.
I haven’t read it yet, and admit that it might probably be somehow ‘less appealing’ then when I first started to read them, but those fantastic black&white illustrations along the book, are worth every short cent I’ve spent for sure.


Anyway, I’ve been following a couple of threads in Talk Fantasy Football forum about “Dungeon Bowl”, for some time now. They both have different approaches on the game, but do have one thing in common: both are absolutely full of fantastic ideas, cool conversions and paint jobs, and truly are worth checking out, even if you don’t intent to play DB, since most of it might be useful for Blood Bowl as well.
(Here are the links if you care to check them out (which you absolutely should!): Yggdrasil thread here, and the solitaire thread here. Thumbs up to both Yggdrasil and the solitaire for their brilliant and inspiring jobs!)

And so, during my Christmas week short ‘time off’, and after many weeks (or months) trying to keep my building/converting drive at bay, I have 'incidentally' stumbled (sort of) into a sheet of 3mm MDF that was begging to be sawn into smaller pieces, which the clerk of the store promptly did!
One of issues that tends to keep me away from new projects, is the storing space most of these take, but if I manage to keep these dungeons as single sheets (without walls), they will be fairly easy to store, but I guess time will tell how this evolves.
Here's some pics, hope you like how they’re turning out! 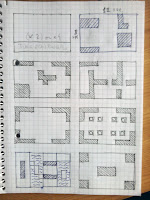 Here's a quick sketch of how the layout of the tiles had to be (based on the second edition of Dungeon Bowl. Link from Board Game Geek here). 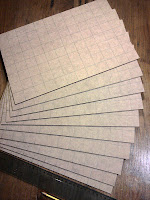 Here are the boards shortly after being sawn, with 3cm squares drawn on them.

The next step was to carve each board along the previously drawn lines, with a sharp blade. I've actually carved each line twice, each time positioning the blade in a different angle, so that the bas relief would end with a "V" shape. The cuts ended up with 1mm deep approximately. 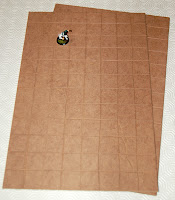 Here you have a mini in a 25mm base as a scale. To add a bit of detail to the board, I've carved a few shattered "pavement stones". Not too easy to see on this pic, but later on they will be easilly noticeable.

Here's one of the boards with the grey spray (undercoat). This undercoat has two roles, one to give the base colour for the "pavement stones". The other (and perhaps most important), was to "seal" the MDF. Despite looking like wood and 'acting like its tough', MDF behaves like denser cardboard, and as I wanted to paint it with acrylics, I simply didn't want it to absorb all the water in and and end up warping. Hopefully the layer of undercoat would help avoid it. 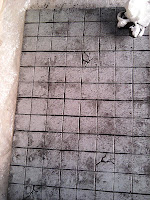 Next step was to give each board a serious wash of diluted black ink, and let it dry for a while. After 10 or 15 minutes (depending on how dry is the air in the room you paint), and before the ink was completely dry, I took an absorbing piece of paper (those used in the kitchen), and absorbed the ink excess. I used it like if it was a "stamp" all over the board, so the leftovers of the ink would give the board a more natural (irregular) 'stony' look. 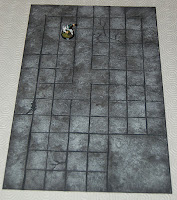 Here's another similar one, with a mini for scale. Both in this and in the above picture you can clearly see the "shattered stones" I mentioned before.

In this picture you can see the eight boards (two endzones and six board games), after the black ink wash. There's a mini out there for scale too. 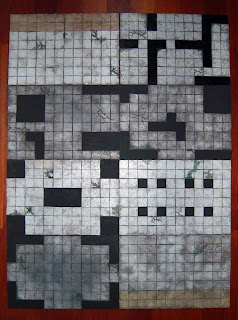 This final image for today shows the same boards of the previous picture, but with some more paint on them. The black represents the walls (which I wont be building - at least for now-, since this will make the boards far easier to storage). I've painted some splashes of diluted brown, and green (it's a dungeon so it's supposed to be slimy), and two different coloured lines to distinguish each endzone.

One of the worries I had on this stage was how to protect the ink on the boards (since the movement of the minis on the board can be quite abrasive), so I decided to give it a try with an acrylic based varnish (check how shiny it looks the top right board), and I'm quite happy with the result.

Not sure how fast this will move from now on (kinda short on free time), but as soon as there's new stuff I'll make an update.
Hope you enjoy it.
Posted by Axtklinge at 17:04

these look fantastic my friend!

my suggestion would be, to buy some magnetic sheet, and cut it out and glue it onto where the walls are supposed to be.

it's black so serves the same purpose as the paint, and then if you ever care to build walls, just glue some more on the bottom and they will stick. that way you can take the walls and dump them into a container for storage and still stack these.

definitely love dungeonbowl, but not the cyanide version it's pretty crappy. much better to play in person. :)

That's a great suggestion Tristan!
I will remember that if later on I decide to build the walls.
Thanks!

I like the approach using the cloth to stain the floors.

Just one thing I´d like to mention, when and if you decide to add walls, don´t make them 30mm wide.

I know that on the classic Dungeonbowl tiles the walls are one square wide, but whith 30x30mm squares you wouldn´t be able to move a model on a 40mm base through the narrower areas.

I made 20mm walls and placed them as far apart as the dungeon layout would allow me. Moving a model on a 40mm round base through the dungeon is no problem.

Thank you for the comments!
At this point I'm trying to get all the boards in the same level of 'readiness' (basic/standard painting, a couple of basic details, and a thin coat of varnish), so I can get to use them as soon as I get the chance. Your suggestion of 'thinner' walls makes all the sense. If I end up doing them I'll have that in mind.

Man this is going to be soooo kewl!