Bloodbowl By The Pool

One advantage of teaching Alexander Bloodbowl is that I now have someone to play Bloodbowl with on family holidays! Yesterday I added Spain (Majorca) to my list of countries in which I have played Bloodbowl, it's not a long list; the UK, Germany and Kuwait completing the roll call, but one I hope to steadily add to.  It was also the first time I'd played by the poolside. 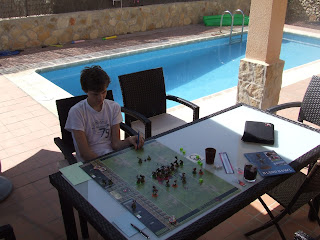 We brought Humans and Orcs with us and Alexander elected to try Orcs out so I played with the Humans.  We worked out rosters for TR110 but didn't add any extra skills.  19,000 fans came to watch with slightly more supporting the Humans, suprisingly the weather wasn't sweltering heat although that would have fitted nicely!  Alexander won the kick off roll and elected to receive. 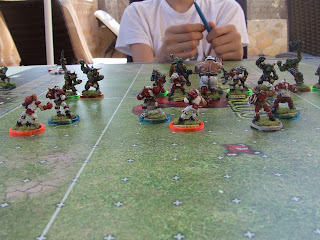 This was his first experience of playing with a 'bash' team but he had soon flattened my front row and having caught a High Kick secured the ball behind a cage in the middle of the pitch.  I moved to contain the cage and slow it down and blitzed one of his blitzers, represented on the pitch by Varag Ghoul Chewer, going straight through the armour and injuring him.  A great start for the humans but not so good for the Orcs who seemed to find the Human's armour just too tough to break.  In the next turn Alexander overstretched himself attempting to move his cage too far, and, having already had to use a reroll blocking, his second GFI with his thrower ended in failure and the thrower fell to the floor and the ball slipped out of the Orcs grasp.  It wasn't going to be easy to grab it for the humans though as there were still plenty of green skins between them and the ball. 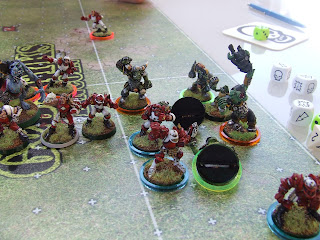 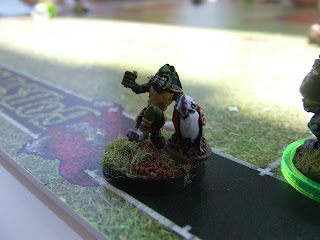 Some blitzing, pushing on to the ball type action ensued but the ball just wouldn't bounce nicely (from a human perspective) and the turn ended when a human catcher attempting to get the ball failed his first dodge roll of a 'death or glory' move fortunately for him Death or Glory wasn't the limitation of his actual choices and he just tripped over and sat there looking a bit foolish. 'Sit there looking a bit foolish or glory' doesn't have quite the same ring to it though!  Still that handed the initiative back to the Orcs and they took full advantage knocking over plenty of humans and flooding the pitch quadrant with even more ugly green fellows. The Gobbo burst through and made a break towards the line but the thrower hadn't read the script (probably can't read anyway) and failed to pick the ball up despite having supposedly sure hands.  All was not yet lost however as the humans just couldn't break the green wall in their turn and in the next turn the Orc Thrower remembered something about a Goblin in the team briefing and having grabbed the ball handed it off to the little fellow who insouciantly strolled over the line, not having yet learnt that it's obligatory to fall over when needing a GFI to score.  This was a fairly early score giving the humans 3 full turns to equalise but a touchdown is a touchdown and the orcs didn't want to risk losing it by stalling out in broken play.  The Orc fans despite being in the minority still made their presence felt and gifted their team an extra reroll at the restart but the Orc defensive line was a little high up the pitch and the humans having blitzed a hole soon had several scoring options. 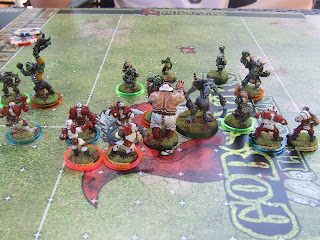 A bit of pushing and shoving left both teams with a KO'd player. Before in the final turn of the half I was left with the sort of move that human teams should pull off, needing only three three plusses with all of them re-rollable. On this occasion a quick pass was caught, the ball run to a catcher within easy reach of the endzone who smoothly took the hand-off and strolled over for an equalizing touchdown.  Neither team had yet seemed to realize that simply doing what the odds said that they should be able to do and scoring touchdowns according to their coach's plan was just not the done thing in Bloodbowl!

The second half started with the Human fans realising they needed to step up their game if they were to keep up with the riotous orcs and the noise in the stadium became so loud that neither team could make out a word being said so both happily assumed the cheering was for them. The Ogre decided he wanted to flatten the Black Orc in front of him so badly that he was prepared to go to ground with him, despite the coach screaming at him that this was a bad idea.  He either didn't hear or didn't understand though and collapsed in a sweaty heap of green and pink blubber which didn't seem to bother either of them unduly but left the ball unsecured and vulnerable.  The orc blitz made light work of the flimsy defensive screen and a blitzer was able to secure the ball after straining his sinews to the max to get there.  Having got there however he had time to look up and realise just how lonely he was, a single word sounding a bit like 'help' may of escaped his lips at this point. 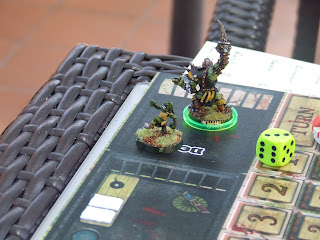 The troll realising he couldn't get there himself decided to helpfully throw a goblin in the general direction.  Unfortunately the gobbo was still reliving his moment of glory from the first half and wasn't really concentrating.  He landed nicely on his head and soon joined the blitzer in the Dead and Injured box!

The humans turned as one to stare at the orc Blitzer who was busily trying to hide the ball behind his back and act nonchalant but to no avail. A quick blitz, a stroll over to pick up the ball and the humans were once again in control of their own destiny, well the ball anyway.  The orcs then charged forward on mass and the game got quite violent with several players getting Knocked Out on both sides and the first human injury being inflicted.  However the humans had sneakily focussed on the ball and were able to make a decisive break down the pitch. 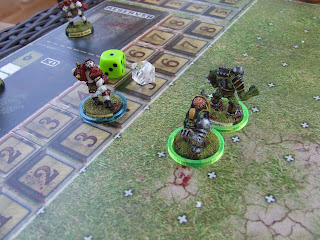 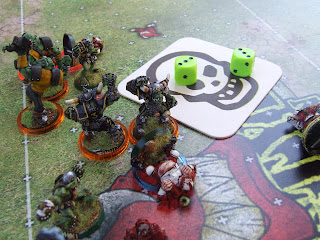 At this point the orcs decided to forget about the ball completely and focussed entirely on removing opponents from the contest.  Using all means both fair and foul to get what they wanted out of the game although a brave referee did decide to send off a Black Orc for a particularly obvious stomp in the fat boys 'gentlemens area'.

Having stalled out at one end, the half of the human team that was still breathing managed to score the winning touchdown.  The coach shrugging his shoulders as he chalked one up in the win column and planned his trip to Club Journeyman for the following day.

A fun game with some twists and turns in it, followed by a dip in the pool, perhaps tournament organisers should take note!

As a footnote Alexander has decided, that he currently prefers Elf Agility to Orc Violence so I think something strange may happen to the human team for our next game, I have it on good authority the Ogre is already feeling a little wooden and may be planning to branch out!

Now you just need a floating table so you can play *in* the pool!


Some nice looking figs there.

PS: And if you decide to stop by (continental) Portugal let me know (and you might add another country to your list).
Have fun!

Ferret you shouldn't say things like that to me I spent almost an hour tossing ideas around to make a floating pitch a reality before having an attack of common sense and abandoning the idea! :)

Axt I definitely want to do that, with any luck sometime next year perhaps......