Just a few days ago, the author of this amazing dugout Das Schwarze Schwein, and proud coach of the accordingly fitting team the Pugwash Pirates , promised to (also) show us his custom pitch! 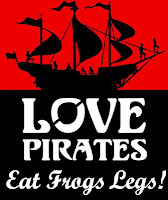 By now we've all learned better then doubt Neil's word (regardless of being a despicable Blood Bowl buccaneer and all...), and so we've waited. Luckily for us he knows his waters far too well and before we could run a rig, he sent word that the pitch he was about to show us had two teams playing on top of it, therefore he decided to add a game report to the pics of the pitch!!!

Game 7 for both the Pirates and the Slann, with this being the fourth encounter between the two teams, Pirates start favourites as they have won the previous three.  However, the last Pirates game saw them lose their unbeaten record as the Diabolische Diven (Dark Elves) beat them 3-1, whilst the Slann also went down to defeat 4-1 against the Skaven of Borussia MönchenRatbach so both sides are looking for an upturn in their fortunes.

Blind Pugh will be making his debut for the Pirates; with only one leg and wearing dark glasses, he starts his Catcher career ranked third behind Eddie Longshanks and Three Legged Pete.

Racing Slanntander had 260,000 Gc to spend on inducements and chose to hire Helmut Wulf and a Wizard.  Pugwash Pirates won the FAME roll (+2) as a disappointingly low 14,000 fans hopped or buccaneered their way through the turnstiles.  The weather was perfect and the Pirates won the kick off roll choosing to receive. 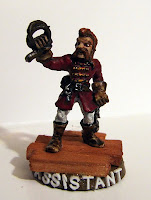 Lemmy the Cat, the Assistant Coach! 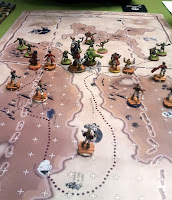 Despite the low attendance the home fans make themselves heard granting the Pirates the resolve to overcome misfortune (extra reroll).  This is good because misfortune, in the form of double skulls, strikes with the very first block!  Rerolled safely though and the way is open to Helmut Wulf skulking in the rear, pirate assist in place and Cap’n Jack blitzes, through the armour and KO’d.
‘You will always remember this as the day you almost got to use yer chainsaw!’

The frogs start to do froggy things in an effort to screen off the cage and set up a blitz but calamity strikes as the Strength 3 catcher attempts to dodge out - 1, dodge skill 1 - and hurts himself badly.
The pirates grind their way down the field knocking out another frog on the way and the Masked Marauder, after anxiously looking up in to the clear blue sky for signs of lightning, strolls in for the opening score on Turn 4, Pirates 1 - Slanntander 0.

Racing Slanntander are unable to revive their KO’d player and set up to receive with just 9 players.  They run it down the wing, blitzing a space free and leaping a defensive screen in place to attempt a two turn equalizer.  Unable to blitz the ball carrier directly the Pirates go all sneaky and orchestrate a complicated series of moves and blocks culminating in a blitz by ‘gentleman pirate’ Johnny Puddles and a chain push to shove the ball carrier in to the waiting fans. 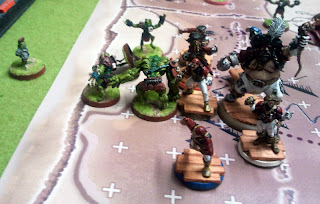 The fans then think it very funny to throw the ball at Master Bates the Ogre who lets it bounce off his forehead and in to space.  Johnny Puddles continues his run and picks up the ball but the pirates having committed most of the team to the scrap are unable to protect him, and exhausted from the effort of blitzing he is unable to pass.  Racing Slanntander declare a blitz on the ball carrier but the curse of double one strikes again as a failed GFI also burns a team reroll and leaves Johnny Puddles free to move the ball down the field and cage up.  He looks nervously up at the sky once more, but still no sign of lightning.  His luck doesn’t last though and the frogs leap in to the cage, one die block - dodge splat - downed and out, dead!  However, Dr Sawbones runs swiftly on to the pitch and carries out Charming Passer Recovery happily saving Johnny’s life but sadly reducing his range of movement permanently.  The frogs are unable to secure the ball though and Eddie Longshanks runs over picks it up and hands off to the Masked Marauder who, with a nervous glance at the sky, once more sets off towards the endzone.  The frogs are unable to reach the ball carrier so instead the Kroxigor takes out his frustration on Roger the Cabin Boy, knocking him out.
The Masked Marauder jogs in for TD number 2 and it’s half time Pirates 2 Slanntander 0.  Where is that Wizard?

The second half starts with the frogs having a mountain to climb, but back up to 10 and receiving the ball they’re not out of it yet.  The Pirates kick straight down the middle and high in to the air allowing the AG5 Slann catcher to step underneath and take a comfortable catch.  Racing Slanntander know they need to score quickly and force a gap in the centre of the pitch where they build a big frog shaped cage and place a catcher with the ball in  the middle of it.  The Pirates surround the cage and place tackle zones in a loose screen to make leaping and dodging as hard as possible.  Then using another chain push they shove the ball carrier one square away from the endzone.  The catcher with the ball does what frogs do best though and Leaps away from the marking Ogre and dodges past the screening pirate before breaking with Blood Bowl tradition and making a successful GFI followed by a second successful GFI to score.  Deficit reduced but Pirates still set fair as they line up to receive the ball next.  The Wizard, having briefly glanced up, sees the Slann score and goes back to reading his book... Pirates 2 Slanntander 1. 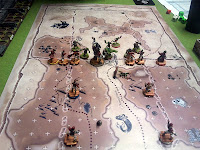 What happens next is a demonstration of both the good and the bad side of playing Slann.
First a linefrog kills himself failing a dodge (despite using a reroll) before number 7 gets hit so hard by Seaman Staines that he is forced out of the game and next weeks match up too.
However, a block by Long John, (double skulls rerolled skull and block, turnover leaving the ball carrier unprotected) followed by a sustained burst of 3 plus rolling, another successful one die blitz on the ball carrier and then some AG 5 wizardry and the shocked Pirates suddenly find the game tied with a quarter of it still to go:
Pirates 2 Slanntander 2.

So 2-2 and anybody’s game; the Pirates have a full crew of eleven on the pitch whilst the Slann are down to 8 however Racing Slanntander do still have the Wizard up their sleeve not to mention their pesky AG 5 catcher! The Pirates set up to receive; leaving a loose square of four players ready to move on to the ball wherever it lands.  Where it lands is right in the middle of the pitch, the frogs realize they need to grab the initiative and BLITZ!  Things are looking black for the Pirates all of a sudden, a successful leap over the line of scrimmage dodge out towards the descending ball……a one, dodge skill, one again and Nuffle gives with one hand and takes with the other. 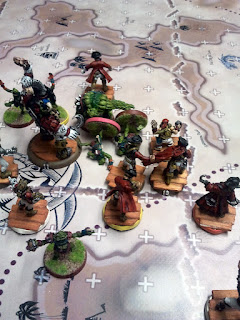 The Pirates consider themselves off the hook there and quickly secure the ball.  They then proceed to press home their numerical advantage; the Masked Marauder slams a frog lineman in to the ground, leaving him unfit to continue, and the Ogre KO’s the Kroxigor.  The Pirates, still concerned about the Wizard and the AG5 catcher, move carefully down the Pitch leaving themselves with plenty of back up plans.
Until finally Eddie Longshanks is able to run in the winning Touchdown following yet another double one dodge from the Slann (this one admittedly a little desperate with only 2 frogs left standing on their webbed feet) and the game is effectively over Pirates 3 Slanntander 2.

The sky is still clear and the forgetful wizard hasn’t made an appearance, is that Pirate gold I hear jingling in his pocket?  The frogs just have time to fumble a pass before the ref blows his whistle and the surviving players troop off for a tot of rum in the Captains Cabin.

The Slann have this ability to get at you anywhere (and themselves out of any tight spot) as long as they get good dice rolls, they don’t need great ones just good ones.  They are a very different proposition to any other team in the game, but they are very weak in the basic skills area and really burn rerolls.

The thing about Wizards is; even though he didn’t affect the game directly (Peter admitted he forgot he had him!) I spent a lot of time taking precautions against him and would definitely have placed players differently had his threat not been there.

Agility 5 is REALLY annoying when you’re playing against it! 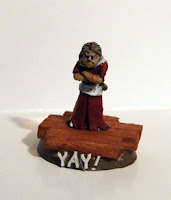 Cheerleader Moaning Minnie,
apparently not that happy about having frogs for dinner...

Last but not least, here's a picture of the pitch in all it's glory! 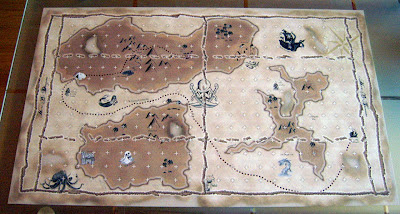 Amazing job Neil.
Thank you for sharing once again!

Fantastic pitch!
Wonderful teams!
Great report!
This is what Blood Bowl is all about :-)

And we've all forgotten that bloody Wizard before haven't we...

The pitch is a treasure map?? That is pure genius. Brilliant ideas throughout for this team, and often the favour of nuffle graces these teams due to the effort and innovation that goes into them. Well done!

Love the pitch and second Paul on this one, as far as I'm concerned this definitely is what BB is about!
Oh... and the Re-Fish-Ments guy is funny as heck!
I wonder if its a conversion or was like that straight out of the bucket...

They are magnificent: the pirates is that all there is around!

As i see this,im thinking...wouldnt be a great idea if i builted a matching pich to every team i own?