Yup,another team on the block,and another one that took me like 5 or 6 years to paint...but hey...they are now done...

Here you have 18 orcs plus Varag...yes,18...since i had another starter box orc team in a trade,i decided i was going for a Blood Bowl Orc "Horde" instead of a normal team so...18 green skins and i dont have a troll...yet  ;) 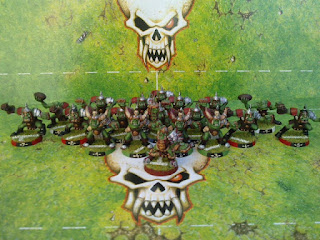 They are painted quite simple so,and again,i´ve painted the bases with the positional colours (im going to do the same with the dark eldars ) 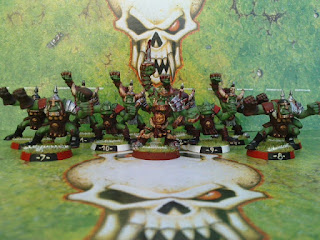 Varag and the positionals (it sounds like a 60´s band or something :) )...they look almost the same,with the exception of the blitzers that have diferent helmets (2 are painted black and 2 in silver). 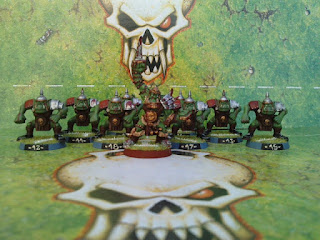 Varag and the lineman...Varag sure loves the camera :) Again,and apart from the pitch marks and one or another blood stain,they all look alike.

And thats about it....all in all,im quite pleased with them...they look nice on the table and thats enough for me  :) Also,they kind of look like Roman soldiers dont they  :P

Anyway,as for the Mecha-Trolls,i didnt started with them yet...my 5 year old catched chickenpox so,hes staying home and i have to take care of him plus,i had my wifes anniversary...pfff....im exhausted  :P
Posted by AbraxiS at 17:01

Thumbs up mate!
The horde looks very dark and sinister, just like orcs should!
:D

Hope your kid gets well real soon!
(...so you don't get that excuse to delay the Mecha-Troll painting any further!!)
:P