I reeeeeealy had to let you guys know about this...

Last week our mate Neil shared with me that his rules were already 'burning rubber' in his homeland England (or should we say 'burning steel', since we're talking about Deathrollers?!?).
Apparently, during the holidays he invited a bunch of friends to his place, and decided to have a go at the "Deathroller Race 2000" game!
As expected, they had a lot of fun, so when his friends went back to their places and gaming clubs, a copy of the rules went along, and you can probably guess the rest of it...

So here we have it: a report from Pete Delafield (to whom we thank for the trouble of writing this up for us), letting us know all about the story that inspired the "Deathroller Build Competition", and showing us the first documented Deathroller Race in England - ever - (take that CNN... or should I say BBC?!?)!

The pic below was taken during the race that took part in the commemorations of the fifteenth anniversary of the Gobstyks Lincoln Gaming Club,  so huge congrats to them for their anniversary, and if you live nearby or just want to know what they're all about, just click on the link (or in their logo) to check their web page!
And while at it, congrats to the builders of all those Deathrollers too, they look great!

Word is yours Pete... 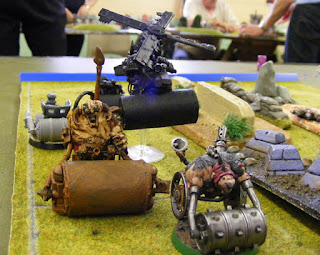 Inspired during my Summer holiday visit to my good friend, Neil Nickson’s, house in Germany, I determined to have a go at bringing Death Roller racing back over the channel to England.
The club I am treasurer of, Gobstyks Lincoln, has a fairly strong Blood Bowl league and the players there are up for a laugh and something different. And so it was that I introduced Neil’s rules to the Gobstyks’ community and they took it up whole heartedly.
With the club’s fifteenth anniversary fast approaching we were looking for some games to play on the night, and we thought this racing would be a great idea. However, we were short some Deathrollers so we instituted a build a Deathroller contest. Then I told Neil of this development and the rest, they say, is history. (Yes, it is our fault.)
There were a range of Deathrollers on the evening, Skaven, Orc, Chaos and Dwarvern rollers all took to the starting grid.

In a contest that was a brutal as the game should be the Chaos Deathroller set about destroying as many others as it could, but despite an impressive two kills could only come in third after throwing away second place to turn around to try and squash the lone remaining Dwarf. The Chaos roller ended up stunning himself and the Dwarf set about trying to cut the Orc Rollercopter’s lead.
Although flying must surely be cheating the Orc claimed first place and the Dwarves second.

Best painted Deathroller went to Phil Croft’s skaven invention. A most deserved winner.
Next step for Gobstyks is to trial the experience and optional driver rules. We’ll let you know how we get on.

P.S. Jervis Johnson was going to be in attendance at the birthday meeting (as he was at the opening, 5th and 10th) but a family commitment called him away. He has promised to come another time though.

Thank's Pete, and please let us know how the optional driver rules go!