This time we have "The Jungle Bunny" made by Patrick Lefèvre.

Heres the before version: 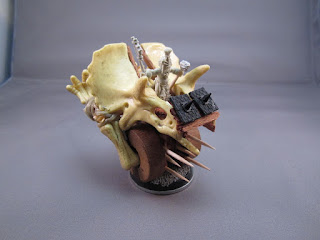 And heres the after version: 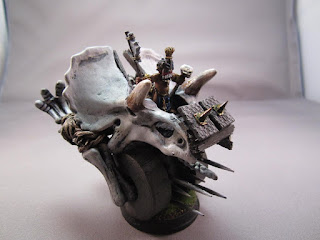 I dont know man...how can you block such a monster??  :)
Also,heres the fluff behind it:
"When Chief Oeggaboegga found out about the Deathroller races over Kaballvision he quickly ordered his sorceror Wizzbang to start the construction of something suitable to attend.
So when the whole thing was ready, the chief, who obviously saw himself as the best candidate for driving it, Wizzbang and a handfull of Pygmees set of to the Old World to compete in the races.
At first the Dwarfs were reluctant to let the Jungle Bunny compete since instead of an engine it is powered by ancient shamanic magic called Voodoo and even tought about disqualiffying it alltogether after it’s first race.
The fans, however, who had witnessed the mayhem it had caused during said race unsurprisingly had a different view and so Oeggaboegga and his bunny were ‘welcome’ to stay."
Awesome  :)
You can read a more in depth post about this awesome Deathroller HERE
And dont forget to check the whole blog...its good read  :)
Also,dont forget to check Tomsche Murrath blog (the guy that did the other Deathroller)
And,to end this post...heres a bonus: 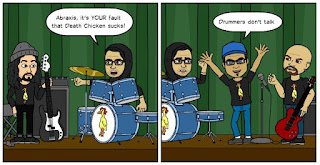 This is part of the Zlurpcast comic strips and...we´re having some band problems...but i blame them for unplugging my bass on purpose...LOL
You can see more of this on Zlurpcast´s Facebook page  :)
And no,i dont have long hair anymore  :(
DEATH CHICKEN F*CKING RULES
﻿
Posted by AbraxiS at 17:11

What a coooool Deathroller!
:D
Congrats!