We have a winner!!!
(Check the voting on TFF post here)

Velvet Mark deathroller #5 has won this amazing race with a total of 17 votes (out of a huge sum of 70 voters), and won a fantastic pair of Deathroller Race 2000 custom dice, sponsored by our one and only Mr. Neil!


Here's the winning DR, cheering after the finish line in the first place! 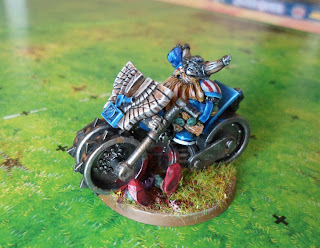 And here is the glittering prize!

- First I'd like to congratulate everyone who decided to have a go at the contest, not only for participating but for putting such an effort on it. It absolutely shows in the great conversions and paint jobs we've  gathered here for the contest. Thank you all for it!

-Second, I'd like to remind you that those machines were build for wrecking the pitch against each other ... errr... I meant RACE against each other, so if you haven't already go ahead and download the rules of Deathroller Race 2000 (here), poke a few mates to build their own DR and put your own championship together!
That's what "the brain behind the game" Neil is about to, and here's the trophy - properly converted - as it should! The guy knows his business doesn't he? 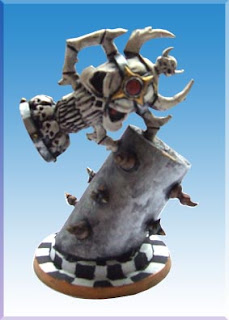 Hey, wait a minute... should there be a wooden spoon for the guy that ended the race in the last place? ;)
Oh, and I almost forgot, I'm deeply thankful for the soul that voted on my DR - the single vote I got!
It has a special taste mainly because it really wasn't from myself! :D
Posted by Axtklinge at 19:14

I'm glad you got a vote, I noticed you were languishing at the bottom - but you should really look at it as how great the quality of competition was!

I just couldn't help myself voting for the viking/dragon head one since he was carrying a stein of beer.

Also major props to your gf - the theme for her deathroller was fantastic.

LOL
Not whining at all Tristan!
I'm actually very happy with the considerable number of entries we had on the contest!
And what fantastic conversion works they are!
:D

oh I would never think you were whining... and yes the quality was very high!