Today when I checked my mailbox, I had this package with a very cool and funny surprise inside: a Wooden Spoon!

It stated "9th Place Winner!" and it had the Deathroller Race 2000 logo on it, both of which engraved by fire! (Is there any better way to show that something really means business, other then using fire to mark it down? Wow!)
Along with the spoon it came a little paper note, a couple of customized DRR game tokens (Yep, you read it right - customized - just check the deathroller that shows up behind the letters of the counters!), a super cool "Wreck marker" (incredibly useful for using in the Deathroller races), and a Scatter Box (What? You don't know what a Scatter Box is? Well it looks like a box, where you can place dice, tokens, etc, but it has a scatter template on the top, so as long as you have a d8 with you, you'll always know where the darn ball will bounce to! Alternatively, if you have trouble deciding where you want to go when you're outside, just roll a d8. Kinda like a compass but better as it's not subject to magnetic influence!). :)


Here it is the photo of the official "9th Placed Winner" in the Deathroller Race 2000 competition! 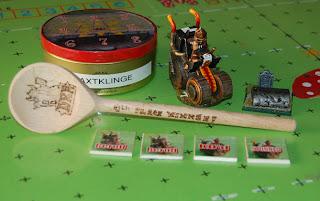 If somehow you have been following either the MMN blog, or in particular the posts related to the Deathroller 2000 race competition, by now you already know this has the "N" mark all over, and had to come from the "DRR Brain" and contest sponsor, Mr. Neil!

I confess I had quite a few good laughs with this package, first just by looking at the spoon (according to Neil's note "(...) there were no losers in a fantastic competition so you are officially the '9th Placed Winner'.(...)", and later while checking the tokens (as I didn't noticed immediately that they were "customized").

Thank you very much Neil, for taking the time to put all these precious gems together, and shipping them our way!
Both me and Mr. Zvarr were delighted to be awarded this prize, and truly appreciated the tokens, marker and box. They will no doubt be useful in our next DRR race!

You know how, when injustice strikes out there in the cold ruthless racing world, and 9th placed contestants are not automatically acclaimed as "9th Placed Winners" too?
Well, somewhere there's a masked crusader, always ready to make justice prevail, that as soon as wrongs have been made rights, simply disappears, never waiting for praises, just leaving behind the mark of justice, his mark, a capital "N"... 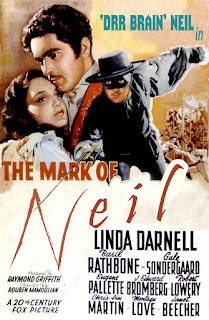 ... that, and perhaps a couple of Deathroller Race tokens too!
:D
Posted by Axtklinge at 18:44

This post makes me really happy and is a perfect indication of why the blood bowl community is so freakin' awesome.