In between BB comeptitions? Easy, have a race!


Between (our) major competitions, NABBO league crew usually gets a couple of weeks off BB to have a go at different or new games.
This was one of those “off” weeks, and since the majority of the guys had a Deathroller parked in their shelves (either had or were very into building one), we decided to have a Deathroller Race 2000 using the rules from our mate Nick. 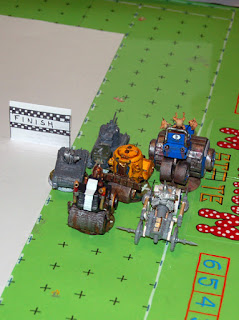 The set up was really fast: after some dice rolling to determine the positions in the starting line, we were ready to go, and so the race began.

As tough as Deathrollers are, we hadn’t even reached the first curve (or should I say corner?), and we already had one smoking wreaked machine after a very hard block, pushing it against the wall.
From that moment on, everybody felt they could actually win the race without completing the two laps (perhaps not even one…), which resulted some ‘destruction derby’ alike moments, but to our surprise only one more of the DR’s failed to resist to the race punishment.
As the race finished quite fast (with two complete laps), we had another one... 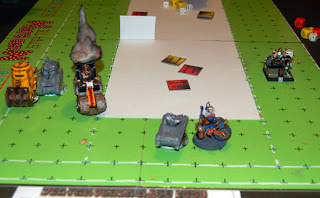 This time, from the initial mess of six DR’s trying to fit at the same time in the four available lanes of the racing drive way, and all the crashing and chain pushing involved, one managed to leave the smoke and confusion unscarred, and took that advantage to gain a considerable distance to the second place.
From that moment on, we almost had two different races: the leading DR managing his distance (amazingly keeping both rerolls the entire first lap, and adding a third one when it crossed the line in the end of the first lap), and all the other DR’s struggling to keep the second place, only to be rammed by the nearest DR.
We had one final moment of tension, when the leading DR was about to give one advance lap to the last racer. In a impressive show of control of his DR, the soon to be ‘wooden spoon’ of the race, turned his DR around, “passed by” the leader (driving in the wrong way), turned his DR once again and rammed full charge into the leaders back (to have the advantage of +1 ST, and the consequent double dice block in his favour). 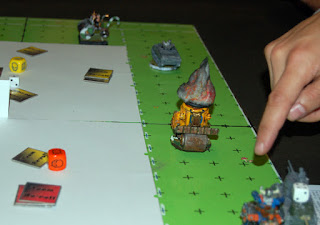 It was a bold move, especially considering the need of 3 Go-For-Its to achieve it (2+,3+ and 4+ rolls, known in the game as ‘Open the Full Throttle’), and it obviously was cheered by everyone else in the game.
The result was not exactly what the crowd expected, and the two results of ‘Push Back’, even helped the race leader, pulling him one square nearer to the finish line, and allowing him to win in his next turn.

Two very entertaining races, of a game with quite fast rules to learn and teach, that no doubt will be  played more times.
Kudos to the Nick for sharing those!
Posted by Axtklinge at 19:18