Another year, another tourney...

Last weekend NABBO League crew gathered for their (so far) yearly tournament.
It's the third year in a row, and so far it has been a whole lot of fun!
As I mentioned in a post about it's first edition (here), while the core of the crew that attends to the tourney are the Blood Bowl League "regulars", every year we manage to have some old league mates to join us in the fun, and what a fantastic opportunity that is to remember old stories of legendary games and teams...


This year's tournament fluff was based on the global climate changes, and to reflect that into Blood Bowl game terms this would mean that despite whatever "Weather Table" result you'd roll during the match, in the beginning of each half, one (out of two) random weather phenomenon would take place and stay in for the rest of that same half.

This weather phenomenon were represented by a template (that stayed on the table), and it had a 'Zone of influence' of a square (center) plus three squares in every direction. The modifiers described below would apply if the action attempted was inside this 'Zone of Influence'.

The two different phenomenons were "Tornado warning!", and "Everything Frozen??".
The first one meant that all Pass, Catch, and Intercept actions were influenced by -1 modifier, and every time a ball was dropped or touched the pitch (for whatever reason), it would bounce one extra square directly away from the center of the Tornado template.
The second phenomenon, would influence the Go-For-It's, and Dodging attempts (by the same -1 modifier) as if the ground was completely frozen, inducing players to slip. 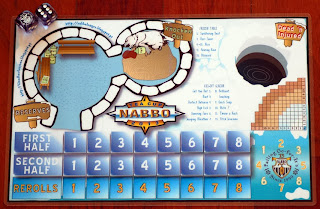 As in past events we had a thematic custom pitch and dice (pic above), which were a great success especially whenever the dice rolls were 'convenient'.
On all other occasions the dice were just 'pretty'... ;-)

A total of eight different races (Amazon, Human, Elf, Dark Elf, High Elf, Norse, Vampire, and Undead), with almost as much different tactical approaches, granted a good challenge for every coach in the event. 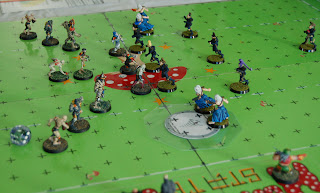 Graveyard Diggers (Undead) vs Yokai Buntai (Dark Elves), one of the games from the first round, and the first tie of the tourney (2-2 TD, 1-1 Cas). 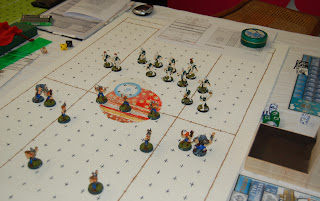 Frost's Frost Fangs (Norse) facing the Innsmouth Oceanics (Elf), in a game that proved to be rougher than what the Norse armour could stand, soon leaving them outnumbered and loosing the match unable to hold off the agile elves (0-3 TD, 1-4 Cas). 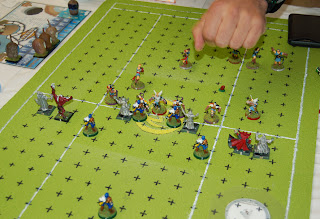 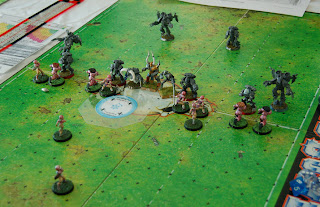 The beautifully painted Pink Buccaneers (Amazons) in a tough match against the cyber-looking Mini Skull Crushers (Human), for a marginal win in the last few turns of the game (3-2 TD, 0-0 Cas).

In the end of the day, the Innsmouth Oceanics (Elf), ended up snatching the tournament "Champion" trophy with three wins, of which the last two where very close games: one against the vampires (2-1 TD, 2-4 Cas), and the last one against the amazons (2-1 TD, 1-2 Cas).
Also congrats to the Garlic 'n Mirrors United vampire team for the "Most violent" trophy!

Hilarious the human space marine team - what is this Spacebowl???

Thanks mate!
I'm still waiting for the dust to settle, but I'm pretty sure there must be a couple of extra sets if you'd like to have some.
I'll let you know.

The 'chaos SM' team is from a youngster in our league. Thing is neither him or is father (also a league player), have ever been lectured in the ways modern GW fluff (fantasy/40k). Anyway, as long as we all can clearly tell apart what is what in the team composition, the rest ain't that much important I suppose.