Following the unfortunate news about GW pulling the rug under NAF licence to produce a new colour of Block Dice, here are the "matching coloured sets of 2D6, plus a D8 and a D16" that NAF has announced last weekend in the NAF Championship 2013. 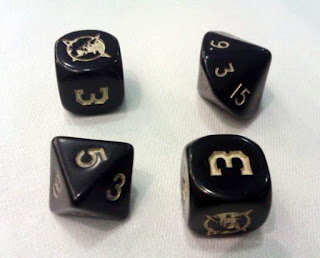 These four lovely dice will be given to all renewals of membership for 2013, unless of course you prefer to get one set of Blocking dice from the colours that are still available (apparently those are Red, Yellow, Light Blue, Light Green and Silver).

And there's a secret within this year's NAF cryptex... I mean dice. You can actually
combine them into a calendar, and set them to the year they we're issued! How cool is that?

Thank you to fellow NAF and TFF member Lunchmoney, for the courtesy of letting us use his pictures!
Cheers mate!
A.