Oh yeah, you've read it just fine!
As it seems these amazing Blood Bowl dwarf "machines of destruction" have finally cleared the pitch!! By Grimnir... we know how devastating one of those thing can be, let alone a pitch full of them!
In true dwarfish fashion (machines, brute force, violence, you know the drill), they can now compete on their own, for the title of the fastest on the track.

But Ill let our friend Neil - author of this great idea - put it in his own words... 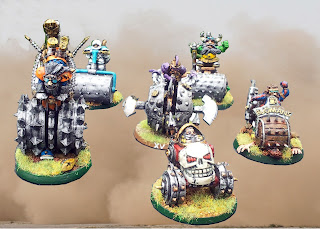 Neil got to work and made sure he had plenty of Deathrollers to fill the pitch!

Barak hit the floor hard, his hand twitched twice and then stopped as he lost consciousness. ‘Nae one calls ma baby slow’ growled Beardy Fokke and, having wiped the blood off it, carefully replaced the monkey wrench in the Deathroller repair kit before turning to face the surviving Cabal Vision reporters ‘Any further questions?’

Deathroller Racing is a spin off from the 2512 Karak Eight Peaks Blood Bowl Season.  After a rapidly escalating dispute between rival Deathroller drivers over which machine was the best threatened to descend in to civil war, King Lorin Greybeard declared the only right and proper forum to settle the matter was on the Blood Bowl Pitch.  A short time and a few modifications to the pitch later and Deathroller Racing was born. 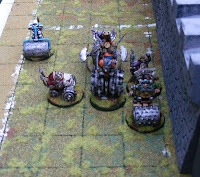 The races generally consist of between four and eight Deathrollers who race around the outside of the Blood Bowl Pitch in a no-holds barred effort to be either the first to complete two laps or the last Deathroller not wrecked.
The Deathrollers can ram each other, foul each other and generally cause mayhem; all whilst ostensibly attempting to prove their Deathroller is the fastest.  In an effort to shed weight they have removed some armour which in turn allows them to ‘Open the Throttle Wide’ in essence allowing them to ‘GFI’ as often as they want but with an increased risk of failure each time as the machine heats up.


Each turn the Deathroller player effectively carries out a Blitz! by being able to move and also block once.  If they choose not to block they may foul a prone Deathroller instead.  When blocking the Deathrollers smash in to each other with such force they often cause the blocked Deathroller to collide in turn with either another competitor or one of the walls that surrounds both the outside and the middle of the pitch. This can lead to quite a chain reaction although pilots may choose to attempt to ‘Stand Firm’ but in Deathroller Racing success is almost never a given.

During play testing so far we have had a lot of fun due to the chain pushing/ blocking rules and the temptation to make just one more GFI.  The multiple GFI’s mean that a single breakaway Deathroller is unable to just take it easy once out front.  A particular peril of being in the lead is the likelihood of being blocked from behind as, due to the rear of the Deathroller being more vulnerable than the roller, any blocking Deathroller that blocks from behind gains a Block die.

Another danger for the leader is the pack ganging up on him by creating a ‘chain push train’.  This is done by using the blocks carefully, pushing the other Deathrollers closer to the opposition before they move themselves.  This, however, carries a risk for the pack too, with the very first wreck in play testing coming as a result of a block looking for a push and coming up with skull and defender down! 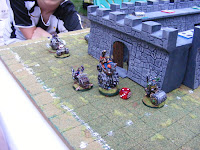 Rerolls are limited to three per player with two being available from the beginning and the third being awarded as the Deathroller crosses the line for the start of its second lap.  This means a player has two options; either be lucky or take risks as they can be used up very quickly.  This has been done deliberately as Deathroller Racing is a risky business!  In our play testing so far we’ve generally seen most people choose to trust their armour on the odd failed GFI early on in the race rather than use their Rerolls up.

In general we have found the game takes about an hour and a half to play with six players using the basic rules.  The rules come with tokens that can be printed out allowing you to try the game without the need to invest in any models.  I’d recommend sticking them to some stiff card before play though. The optional driver rules haven’t yet been play tested and we have a few further ideas to introduce variety but the ‘simple’ version has already proven a lot of fun!


And here are Neil's Deathrollers bios just to get you inspired...
(please click on them to see them bigger)

Please check the links below for the rules (and some tokens/markers) provided by Neil!

This is the most awesome thing ever!!

It sounds perfect to play the saturday night of DEATHBOWL!! Deathbowl pitches are bigger and I can see this being amazing fun!

This is pure awesome.

Awesomesauce indeed! I so NEED to play this!!!

Thanks for the positive feedback guys.

@ Tristan you might be able to tell from the 'action shots' but we use my 40mm squares 'Ogre Pitch' for the game as Deathrollers need a decent sized base. The tokens have been sized to fit a standard BB pitch however. When I first had the idea, the social nights before or in the middle of a BB tournament was in my mind so the Deathbowl (DeathRollerBowl?) thing would be cool!

@ Abraxis (or anyone else that reads the blog and has a Facebook account!) can't find you on Facebook mate if you're interested search for me Neil Richard Nickson and send a friend request. There appears to be only one of me! You’ll find plenty of pics of my miniatures posted on there.