Swag or Stuff either way it's gooood!

Some of you may have read here on the blog how I got lucky at Narrenball earlier this year with my Undead team.  Well aside from a massive trophy (which I don't get to keep) and a NAF Trophy (which I do!) I also received an Impact voucher for 70 euros as tournament Champion and another for 20 euros for Most Touchdowns (an astonishingly low winning total of 8 from 4 games!).
Well I thought I'd share just what I bought with it so here goes: 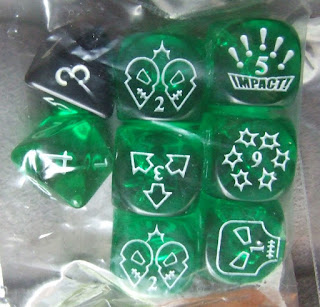 First up dice, as most of you know I'm a total dice addict.  These Impact dice are dual purpose as they can be used as block dice or d6,  A clever idea but somehow I am not convinced.  Still they are a nice addition to my collection. 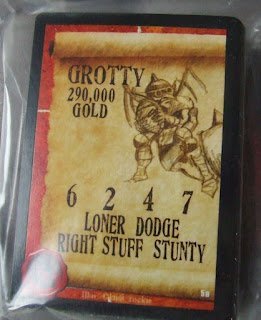 Then Star Player Cards.  Now I think these came from Australia originally (or should that be aboriginally?) and I picked them because I liked the look of them rather than with any actual usage in mind.  After all, the star players are listed in the rule book right?  However, since I've had them I've found them to be very useful, whether in league play or at tournaments as soon as you are facing one of these titans of the turf get the card out and sit it next to the pitch.  It saves constantly looking up what skills Morg has (what doesn't he have!) or constantly having to ask your opponent 'What Agility is Jordell again?', 'Oh, I thought that was what you said!' or forgetting that extraordinary skill 'She can do what!?!'. 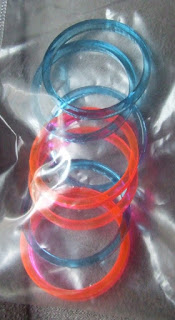 I got four packs of fluorescent skill rings, the 'hard' variety.  I've got a few sets of the rubber rings, which I generally prefer, but I thought these might be useful too particularly when used in conjunction with the rubber ones.  I have a lot of converted miniatures and although I am a big fan of this part of the hobby I prefer not to leave myself open to the accusation of gaining an unfair advantage 'The one with the ball isn't a thrower then, it's a blitzer?' that sort of thing. So I thought by using the rubber rings to denote positionals in heavily converted teams with the see through harder rings to show different skills this might alleviate the problem.  It doesn't quite work as I intended because the rubber ring is very difficult to see underneath the fluorescent one and the hard rings are such a tight fit they don't really sit on top of the rubber ones too well.  Still variety is the spice of life, as they say. 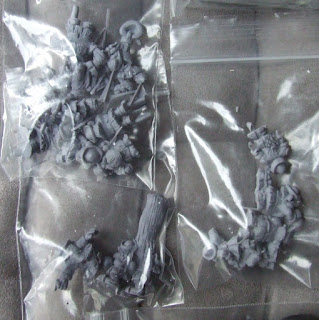 But what about figures I hear you say, well since Impact have just launched their range of certain teams recast in resin for $35 (excellent value) it was too good an opportunity to miss and I ordered a Scotling team.  They are very characterful especially the caber tossing 'Treemen'.  Someday I'll find the time to sit down and paint them up......someday! 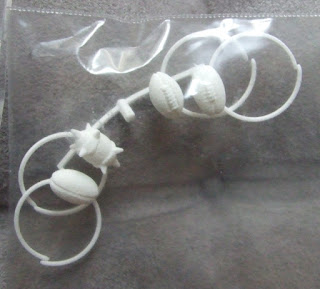 I have a lot of balls (snigger) already, one for each team plus some, but I thought I'd add these to the collection as they could save time during the game.  You know the drill constantly trying to squeeze the ball back on to the modelled and flocked base only to have the next dice cup delivery dislodge it again. These should help alleviate the issue as they can be applied in many ways apparently.  I say apparently because I have yet to paint them up and without painting them there is no way they are coming on to my pitch(es)! 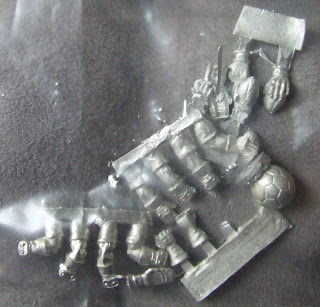 So I've talked already about converted miniatures, and (just) about balls so I added a few packs of conversion arms and hands as these are often the bits you need to make your conversions look more 'bloodbowly' and less 'weapon snippy'.  I also couldn't resist a football (soccer ball if you must!).  These are bought more with vague long term intentions than any immediate plans but I'm sure will come in useful eventually.

And that as they say is that, I think a pretty impressive haul for 90 euros (including the postage!) and a selection that addresses many of the facets of the game.  When you think about it I'm a very lucky man, 4 good games of Blood Bowl with like minded friends, a shiny new NAF Trophy to use as 'Intimidatory Reroll Counter' and all this stuff to boot! 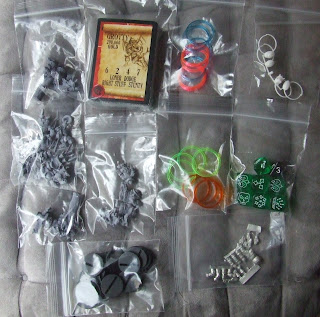 That is one HUGE amount of goodies and cool stuff to win mate!
:D
And let me tell you something (like you don't already know...). those NAF trophy's really have an amazing aura!
Not only they are a huge warning sign for opponents about your coaching skills (yeah, yeah, I know you called it "how I got lucky" and all...), but also they are absolutely beautiful!

Congrats on the win and the great swag. My son sat down across from a player once, whose 4 re-roll markers were NAF trophies...

Thanks guys mainly I wanted to say two things, firstly Impact offered amazing support to a relatively small tournament and secondly what good value you can get for your money there. No I'm not on commission!

@ Paul did your son win then? That would be epic!