The inaugural blingtoof's gitbash is in the books and I fully succeeded (and I mean FULLY) in winning the "Best Fouler" award.  I will save the details for further down the post but suffice to say that while second fouler had nearly triple the fouling points that third fouler had, he was still over 40 (yes FORTY) points behind me. MUHAHAHAHAAAAA!!!


Game 1 was vs Tyler and his Orc team.  There are some pics below. Unfortunately for him he left his thrower too exposed early after receiving the kick and I managed to (after fouling for that turn of course) blitz his thrower down and steal the ball.  I stalled for a turn but by then a lot of his players were off the pitch so I scored to get more back on (to foul - lol).  He very nearly started the game without taking an upgrade package but I made sure he did, that would have just been unfair.  So he gave one blitzer +AG and someone +AV I think. In the second half I stalled too long and he caught my ghoul, then managed to work his way up the pitch to score.  To be honest I wasn't too upset as I didn't really want to be winning all my games. 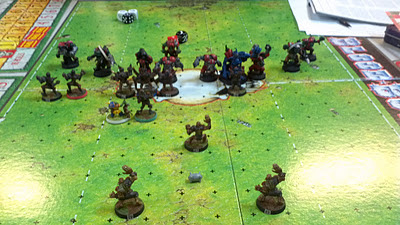 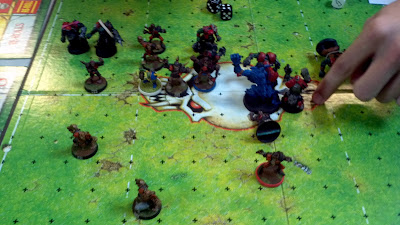 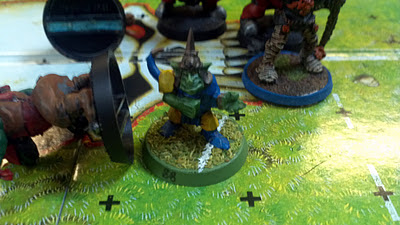 Game 2 was vs Chris (the tournament organizer) and his underworld.  We all got a normal skill to give to a goblin and a normal skill for anyone.  I gave my Fan Favourite goblin Sure Feet and my Leader mummy Grab. Chris got a quick 2-0 lead built up, and was really smart about avoiding my fouling.  I did foul out a fair number of his guys including his pumpkin troll (see pics 2 & 3 from below).  From there I caught up with two quick touchdowns of my own, but towards the end of the game he was looking pretty sure to get a third and I just took advantage of the proximity of his players to foul more! 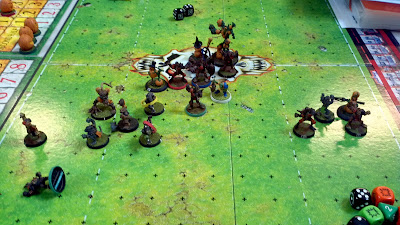 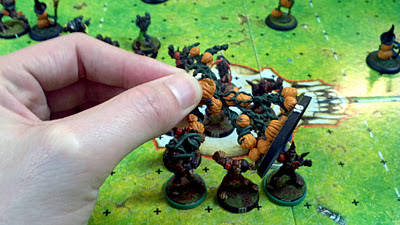 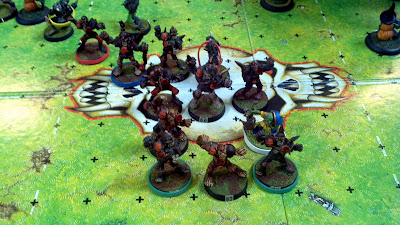 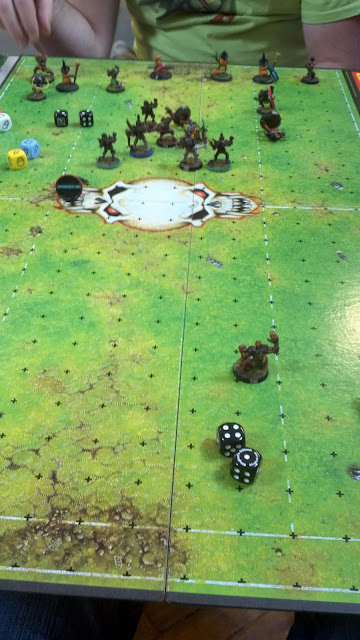 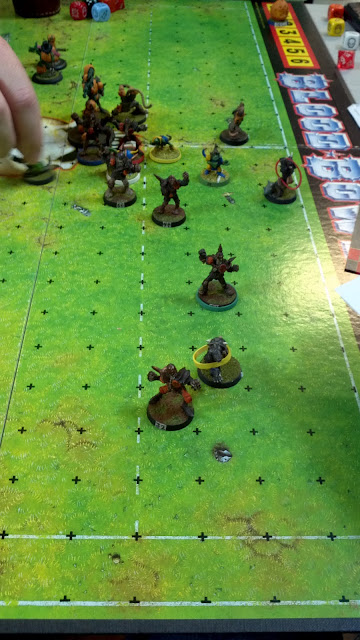 Game 3 was vs. Robert and his Orc team (there must have been at least four orc teams out of fourteen coaches).  We again got two normal skills to distribute so I gave Sure Feet to my goblin with Sneaky Git and Guard to a wight. He had a pretty standard non-troll orc team and he was the eventual wooden spoon recipient.  I tried to help Rob out a bit as he was obviously new to the game, so I showed him a bit about how to line up blocks so if you only get pushes you can block with another player, etc.  I had a lot of trouble knocking down his Orcs (he had a lot of Block) and so suffered my lowest fouling points game in the tournament. 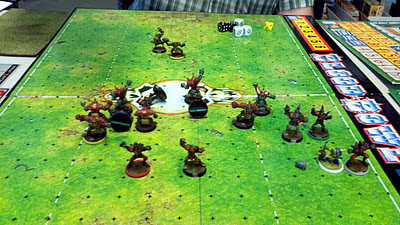 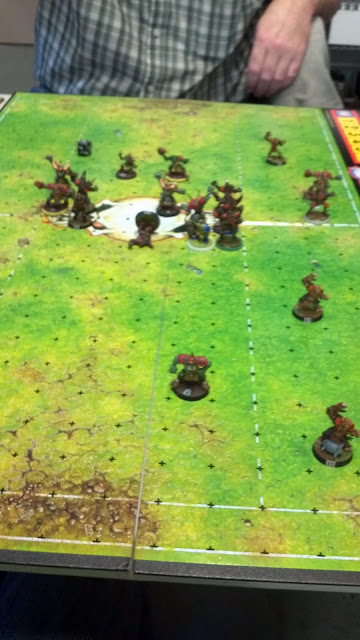 So I ended day one with a respectable 1 win / 1 loss / 1 tie (especially considering how frequently I ignored the ball!) and a massive 61 (yes, SIXTY ONE) fouling points.  The next highest had 40. I found out my next opponent was a chaos pact team so I was looking forward to fouling a bunch of goblins and skaven!

Game 4 was vs. Mark D and his chaos pact team. I gave my last skeleton Dirty Player and last goblin Sneaky Git.  He quickly went up 2-0 but my fouling began to take it's toll.  I totally ignored the ball for the entire game, and it led to a hilarious conclusion in the final turns of the second half.  Marks ogre had kept blitzing towards the ball in my end while I was fouling the rest of his team near the scrimmage line.  He managed to get the ogre to pick up the ball and all the way to the end zone. Then he called it - "watch now he's going to go bonehead on the end zone line" and of course - nuffle works with no mystery at all.  3 boneheads in a row gave me a chance to sneak a goblin onto the pitch and help tie up the ogre with a skeleton. In one of my last turns I just decided to throw a two die uphill block and double-kapow'd the ogre, breaking his armour and stunning him for Mark's last turn. 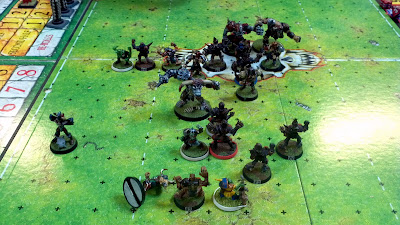 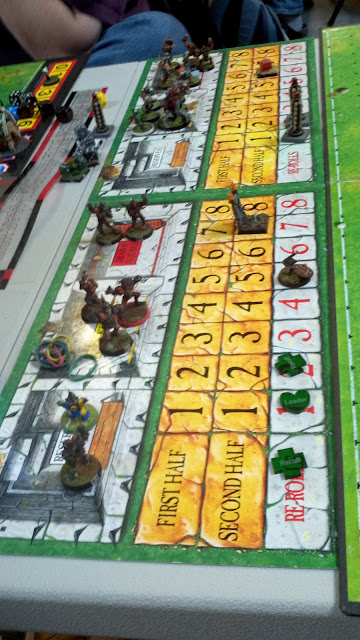 Game 5 was the final game and I was matched up against Craig who was also trying for the fouling award but quite far behind me in points. I gave my Fan Favourite goblin +AG and my wight with Tackle +ST.  This was the second underworld team I played, and we both ignored the ball to concentrate on fouling (I did use it to distract him several times - AFTER my foul for that turn of course!) thanks to Stunty & Dirty Player I was quite successful in getting his players off the pitch.  He kept throwing the ball into my end to try and keep the game tied.  Late in the game, with his last player on the pitch (his troll) he threw a 3 die blitz against my same goblin who blocked Marks ogre down, rolled triple skulls and failed his loner to reroll! I then proceeded to break armour and KO the troll - BOOYAAH!  With three turns left and the board empty of underworld players I did manage to score a touchdown (took all three turns cuz I had no rerolls and ghouls were dropping my hand offs!) which very nearly gave Craig the wooden spoon but he did have lots of fouling points which were first tiebreaker. 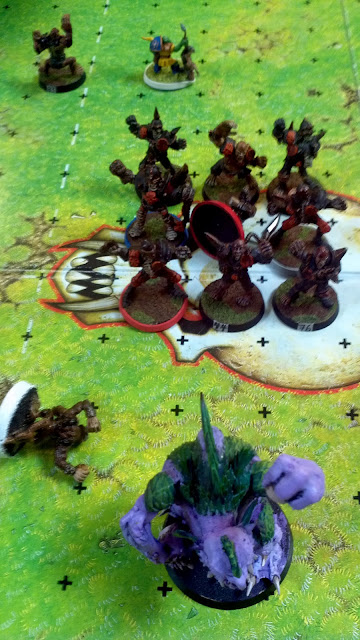 Day two finished up 1 win / 1 loss and a massive 55 (FIFTY FIVE in two games!!) fouling points, bringing my grand total up to 116, with Craig (my final opponent) next highest with 72.  "Best Fouler" was in the bag and I managed a pretty reasonable winning % as well with 2 wins / 2 losses / 1 tie.

Some other stats, I actually placed 7th overall, which is just into the top 50 percentile (with 14 coaches) and I was 8th for most touchdowns and 10th for most casualties.

Also congrats to my buddy Mike @ shiftedmatrix for winning Best Team award with his Nurgle Rotters.

dual posted on GWpertinent
Posted by Tristan M at 13:52

That is a HUUUUUUUUUUUUUUUGE amount of fouls mate!
And you've even managed to grab a few wins along the way!!

Great job.
Cheers to you!

each trophy was a bag of rats with some other item to discern the different awards. i think first place got a black rat. (spoon was obvious, best team was paint brushes, etc)