Here it is, the last article on the "Dungeon Bowl Board" series!


As you may recall, in the first one I describe and illustrate how I've "built" and gave some basic painting to the Dungeon Bowl tiles (First here). In the second I've introduced the "teleporters" and "chests", and add some more colour to the End Zones (Second here).

After the painting of the End Zones was done, I felt the other boards would benefit of some colour too, so in a trial-and-error kind of process I've painted some shades and/or some solid colours on the floor of a few of the tiles (in order to make them look like different rooms), so its easier to distinguish them, and perhaps even use them for games other then Dungeon Bowl.

You might have noticed before that I've built four End Zones (instead of the usual two), because I really want the option of playing with more then two players. To that end, I've also made two extra tiles (one with a small lake and island in the middle, and other crossed by a lava river), that will allow me to have a wider layout (or should I say a "bigger dungeon"?), that might prove useful when playing with more than two players. 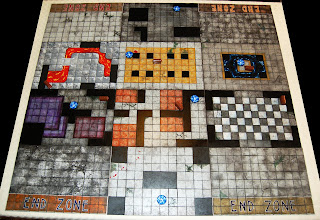 In the above photo (sorry for the poor flash induced quality), you have all the tiles in one possible set up, with six teleporters and chests. As usual, the "black" squares stand for walls (so no crossing or throwing the ball over those), and all the others are 'normal' tiles, except for the 'lava' and 'water' ones of course.
(Speaking of 'lava' and 'water' tiles, they are the second ones counting from the top, both right and left, just in case you're having trouble finding them...)

It was a very fun, quick and cheap project to do (less then 5€ for both big mdf boards I've bought, with the cutting in 'tiles' done in the same place for free). Now I just have to find some time to have a go at it with my BB league mates.

Further ideas for this project might include "real" walls using magnets to keep them in place and make them easy to take off and store (kudos for the magnets idea Tristan!), building "staircases" and "passage ways" to add an upper level to the dungeon , and possibly get a few random monsters to sneak up on the players!

Hope you enjoyed it, and please feel free to comment or add some more suggestions!

These look incredible! Definitely makes me want to make my own, great job buddy!

Thanks T!
Looking forward to trying them out with a game.
:D