Narrenball - It's 'Jester' another Tournament!


Hi fellow Blood Bowlers! I have a couple of things I’d like to share with you on the Blog now I’ve finally taken the plunge and committed to being a (hopefully) regular contributor.  However, as some of them need a bit more work and I’m a little pressed for time at the moment I’m going to start with a tournament report.  So here goes…

A new tournament on the scene here in Germany, but hosted by an experienced tournament organizer, the first ever Narrenball (translation - Jester Bowl or Fool’s Bowl) took place on the 10th of February.  Each competitor also received two cool Jester Dice. The idea was to have a tournament that epitomized the Carnival season here in Germany with lots of randomness going on.  Four games in the day on a tight time limit of 2 hrs per game with penalties for slow play.  Team build was from a budget of a million GC a minimum of 11 players although Star Players could be part of the 11.  All skills (cost 20,000) were paid for out of the starting funds, max 1 per player and max 1 ‘double’ (cost 30,000) per team.  The final rule on team make-up was max 1 Reroll and the Leader skill was forbidden with the idea being to increase both speed of play and the chances of a random failure.
In addition each team would be given a Cherry Bomb to use once in the Tournament and before each game would draw a random Special Play Card from the 200,000 deck.  I decided to take Undead as my team as they are solid all rounders and a good tournament team with potential to allocate enough skills to ameliorate the lack of rerolls.  And so Better Dead were born (or raised!) a small gamble on my part as I’d never used Undead before, played against them sure but never with!

So on with the games, first up were Skaven.  I’m thinking if I can keep the game tight I should be able to grind him down but I’m always wary of the danger four Gutter Runners can pose.  The game started with me kicking to him.  He played his card straight away ‘Iron Man’ and I knew my Ghouls would have to contend with his Storm Vermin Blitzer with Tackle for the whole game!  The first thing he did with it was blitz one of my Blodging Ghouls in to the KO Box, oh well not had a turn yet and down to ten players.  He then secured the ball counted carefully to place his Ball Carrier out of range and ran around a lot trying to create scoring threats and generally being Skaven-like.  Then my turn: I had drawn ‘Orcidas Sponsorship’; which I gleefully played on my Wight with Tackle as the plus 1 MA, Sure Feet and Sprint skills that he gained meant I could just reach his ball carrier to blitz him.  First GFI, a one, oh well I have surefeet, second GFI no problem, third GFI another 1!  Well 1st turn and that was the reroll gone.  Still the blitz was successful; I stunned the Gutter Runner and the ball bounced in to the Endzone.  He was in a fairly desperate position now but with 2 GFI’s he managed to get a Tackle Zone on the Wight and provide an assist for a Gutter Runner with Wrestle for a one die blitz.  This action cost him his reroll too but having rolled the Both Down result and used his skill we both ended up on the floor.  I now just needed a 3+ to dodge out and another to pick up the ball for 1 nil; dodge 6 pickup 2 oh bugger!  There followed lots of to-ing an fro-ing before eventually I was able re-secure the ball and score just before half time.  In the second half attrition on the Skaven gave me control and the game finished with a 3-0 win.

Next up were Amazons, coached by a friend of mine who is a very experienced tournament player and also the organizer of Sturm der Hiebe.  He had the usual plethora of Blodgers (7 or 8) a couple with Guard and some other skills with only one of his players not having been given an extra skill!  I’d drawn the ‘Bad Habits’ card meaning he had no rerolls at all for this game, however at the start of each half the kick off result gave him a reroll anyway!  He kicked to me and I set about the standard grind, working my cage relatively quickly in to position before stalling out and trying to remove players from the opposition.  My Tackling Wight was an absolute star in this game, although he seldom needed the skill he seemed to roll a lot of splats working on the theory that a dodge splat or a splat were equally good I guess!  However just as I was readying to score I double skulled with him and left the Ball Carrier vulnerable.  Marian managed to get the ball loose but after a run of dice rolls that weren’t majorly outrageous but left no room for error I wrested it back and went in to half time 1-0 up and 11 against 8 in the second half.  This numerical advantage allowed me to pressure him enough to force a couple more ladies off the pitch and eventually rip the ball free.  Marian had other plans though having drawn the ‘Zap’ card and he turned my Ball Carrier in to a frog!  Thus causing the ball to bounce free and a proper scramble for possession to ensue but he just didn’t have enough players to force his way through for an equalizer.  I also managed to roll a 1 four turns in a row at the end of the game when trying to pick up the ball but, still closed the game out a 1-0 winner and now sat 2nd in the rankings.

Top of the pile was a Dwarf team called Frenzy Fools, my opponent had given both of his Blitzers Frenzy, a tactic I’d never seen before, meaning he had four players with Frenzy so the sidelines were an area of concern. I drew Orcidas Sponsorship again this time giving it to a Blodger Ghoul.  Again I won the kick off roll and chose to receive; my opponent set up with 12 players on the pitch, an interesting move as he didn’t even have 12 on his roster!   Competition rules allowed me to remove two players of my choice from his team, but I chose not to do this and just pointed out the anomaly making him remove the 12th dwarf.  I did this because even though it is a competition and therefore about winning, I like to enjoy the game and I didn’t want any sort of atmosphere even though it wouldn’t really have been my fault.  My surehands Ghoul tried to pick up the ball rolling a 1 rerolled 1 in the first turn meaning I had now rolled 6 1’s in a row over two games when attempting to pick up the ball!  A first half then took place that was only memorable for me managing to kill a Dwarf Blocker early on; here I redressed the run of 1’s by rolling 12, 12 and then 6 again to turn him in to a Zombie. My opponent thereafter becoming convinced Nuffle was against him. In the second half my defence held strong and I forced a turnover and gained possession then caged up ready to drive down the pitch again.  His special play card came out then, ‘Ballista’ effectively giving him a Lightning Bolt (like a wizard). Although he was able to knock down my Ball Carrier he couldn’t secure the ball himself and I recovered it and progressed down the pitch.  At this point he decided he didn’t have anything to lose and played his Cherry Bomb.  To be honest this turned out to be a bit of a damp squib and the Undead scored again and ran out 2-0 winners.

That left the final game and I knew if I won it I’d be Champion and that I had enough of a points advantage that a draw would probably also suffice.  I was also joint leader in the most touchdowns race and just behind but in with a shout of a clean sweep with the Most Casualties tally.  My opponent was using Norse, which as Marian rightly said are a good match up for the Undead.  The odds became even more favourable for me when the first Kick Off Table result lead to Throw a Rock which I won; the Deadly (sic) accurate fans hit one of his players squarely in the eye and killed him!  A Norse Zombie meant without a turn being played I was 12 players to 10 to the good.  He received the ball  but I was soon swarming all over him having played my special play card ‘Ego Trip’ on his Thrower meaning he had to use him first in every turn or not at all.  This worked brilliantly as it meant he couldn’t set things up to his advantage and was forced to take risks which didn’t come off.  He drew ‘Iron Man’ and that meant a Berserker would not be leaving the pitch.  To be honest he never really recovered from the thrown rock and the almost instant turnover due to the pressure I had put on him and the Ego Trip restriction.  In a flash the game was over (16 turns each in under an hour!) and I had won 2-0.  I also ended the game with 2 Norse Zombies which was kind of cool for me but not so great for him I guess.  As a side note we had both saved (or avoided!) using our Cherry Bombs until the final and once again they proved ineffective, although I’d waited until the last possible turn anyway. 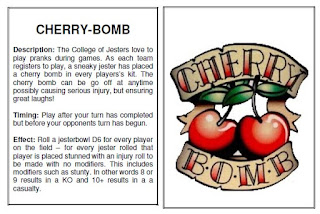 All of which left me with a 100 per cent record scoring 8 unanswered Touchdowns which was enough to give me both the Tournament win and Most Touchdowns prize.  I missed out on the Most Casualties prize by 1 casualty, but hey, it would have been greedy to win everything!  To go with the Trophy, which I keep for a year, I also received my third NAF Trophy (I love those things!) and Impact Miniatures had kindly donated vouchers as extra prizes.  My son, Alexander took part in this, his second tournament, too and finished a respectable 11th out of 18 with his lizardmen ‘Bonehead Wanderers’.  Not bad for a kid playing games 7,8,9 and 10 of his Blood Bowl career!  All in all the tournament rules worked pretty well but maybe if they want to increase the random nature of the game 4 x 50,000 cards would be better than 1 x 200,000 card what do you guys think?
Posted by Neilpferd at 15:41

Sounds like a blast! Congrats on your win and give your son a pat on the back :)

Just FYI - you can only raise the dead once per match.

Thanks for the infoTristan (and the congrats). Fortunately for my conscience: A I didn't know that rule (even after all this time there is something new!) and B The second Zombie never made it to the pitch!

I've done as you asked and patted him on the back. :-)

Loved the tournament report Neil!
Congrats to both (father and son), for such great results!
:D

Also loved you minis choice for the team: your 'Ghouls' are lovely (I recognize them from Impact), but your dancing mummys are a blast too, and those I dont recall seeing.
Are those converts from some other company?
Cheers!

Yes Axt. They're from the Wargods of Aegyptus range.