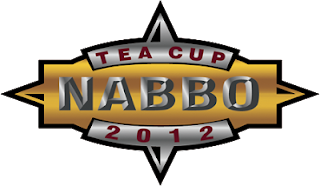 As some of you might remember, past 2011 our local Blood Bowl league decided to have a tournament (NABBO Tea Cup) to commemorate its 10th League (link). Truth is everyone had such a great time, that right there on the spot we decided to do another one the following year (that would be early December 2012, to take 'advantage' of a couple of holidays around that time). But then, "real life" decided to meddle with our BB affairs, and things got a bit less easy...


To keep the boring stuff at bay, I’ll just tell that due to ‘out-of-our-control’ delays (such as ‘customs officials’ strike that lasted for a hand full of months…), everything was forced to be postponed, including our custom Chessex D6 that only arrived mid January. Fittingly enough, the tournament fluff was about the announced “End of the World” (for late December 2012), and so with some tweaks here and there it all fell into place.
According to the tournament fluff, Mayan civilization was spot on about a big cataclysm in the end of 2012, which was to engulf the world as we know it.
What they didn’t knew or forgot to tell us was that this was to be triggered by an massive invocation of Cthulhu demi-gods (hurray for the tentacle dudes!), thought out by a obscure cult that would combine the right alignment of the stars, with a pool of thousands of sacrificial souls gathered in one same spot!
And what better place to gather such amount of souls, than a pitch of Blood Bowl and its spectators?

In the ensuing fight between the cultists and the vigilants (the late trying to keep the aberrations at bay), several “space and time” portals were opened by the cultist faction engulfing everyone within a few miles while the battle raged on, only to release them when it was all over. Despite all the confusion in the survivors minds, it’s now a bit easier to understand why a tournament that begun early December 2012 (or at least that’s what it was supposed to…), only ended in... early February of 2013!!!

Aside from the regular 1.1k team choice, plus a pack of skills (6 General, 4 General and 1 doubles, or 2 General and 2 doubles), there was one extra thematic fluff thing each coach had to do. After sitting in his gaming table and looking after his opponent for that match, the coach had to choose which side of the “grand scheme” he would be a part of: either helping with the invocations to turn our world upside down, or fighting it!

- The Cult -
If joining “the cult” and helping with the invocations of Cthulhu, he would then needed to “raffle” amongst his players who would be the true vessel of the gods, and that player would be assigned the skill “Tentacles” for the rest of the game.
The Tentacle player presence in the pitch was mandatory, and if something happened to that player that kept him out of the pitch (ko, or injured), then immediately another player had to be gifted to “serve the gods”, and see the Tentacle transferred to him.

-The Vigilants -
On the other hand, if the coach had no sympathy for entities from other worlds, and felt like kicking some tentacle’ed butts, he could choose to wield the “Burning Nail”, one glamorously weird magical dagger that could be used to cut cheese, carve wood or even pick teeth, without ever loosing edge. Oh, and it could also be used to Stab opponent players, with +1 on the armour against anyone with Tentacles!

Of course with such different takes on the game, we needed to have two different sets of dice for coaches to pick from, according to the factions they choose (either 'flaming orange', or 'tentacle green').
A thematic dugout was obviously mandatory, therefore with all the fluff in mind, one was created.
It represents a decrepit house (that's where the Reserves stand), a Sub-Cave for the KO’ed (where some of poster signs on the walls show the logos of old NABBO League legendary teams), and a Secret Cave, where evil lurks and the invocations take place (over a scatter template, just to point the way to the aforementioned invocations…), and you can also put Dead & Injured guys in there! 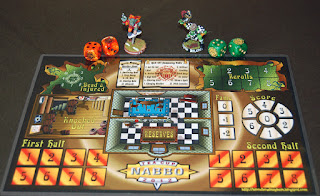 Here's the Dugout and the Dice. Both Poggo Stick and Chainsaw minis are just for scale!

The tournament was pretty much a success, with two more players than the last one, everyone had lots of fun (that kinda was the easy part since we’re all friends and already know each other from the local BB League), and while not a complete surprise, it was quite nice to see it won by the only girl playing in the tournament. A “Two-nil” score against every coach in her path was a sure recipe to victory and one to remain in the history of the competition! 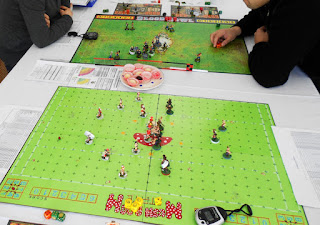 Tournament Pic #1: Up there we have Dark Elves facing Norse (the first 2-0 for the Elves that would keep that same record through the whole competition), and in the lower part of the pic another Norse team faces a Human team (3-1 for the Norse). 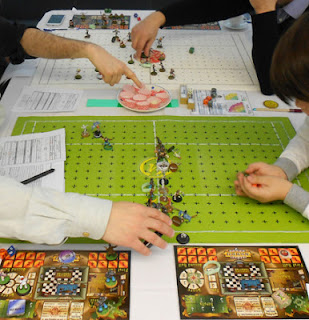 Tournament Pic #2: On the white pitch Wood Elves face High Elves (with a 4-2 end result), and in the green turn Humans take a dent at Undead winning by some generous 4-1. 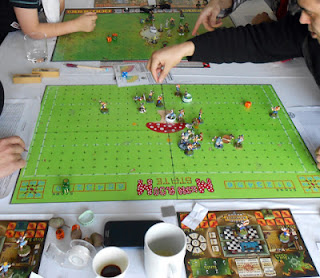 Tournament Pic #3: Later in the competition the Undead strugle to keep another Humans team at bay (up in the pic), while in the bottom of the pic, the High Elves lose 2-1 to the Norse, despite winning the attrition war.


Edit: With the tournament over, and despite still having some math to do, we may still have a few Dugouts and Dice as leftovers to sell (as much as we’d like to keep ‘em all for future League gifts and stuff, money is an issue and so we'll probably have to part with them). I'll probably post those later on Talk Fantasy Football, so if someone is interested let me know either here or by pm in TFF.