Game three I dropped down to table 14. I played Chris with his Orcs. They were called "Generic Orcs". Chris was also from Rockford and friends with my previous opponent Craig.

From memory his roster was;
2 Black Orcs w Block
2 Black Orcs w Stand Firm
2 Blitzers w Guard
Blitzer w Leader
Blitzer
3 Lineorcs
Goblin
2 Rerolls
As with the previous game posts here's the tweets and photos I posted yesterday, I took too many photos in game two and I had to charge my phone so that's the reason I only took a few photos.
I was pretty disappointed with my performance in this game, mainly that I confused one of his Blitzers for a Black Orc. It's a mistake I frequently make with Orcs teams made from WHFB Orcs but still was no excuse. I thought my ghoul was in the clear but he got a tackle zone on him which eventually meant he scored instead of me in the first half. Hopefully this might teach me to count squares more in important circumstances.
Still, well played to Chris - he managed two TDs with thrown passes (one short and one long) which is very impressive with Orcs let alone without a thrower. Game ended as a  1-2 loss, 0-3 CAS, getting me 15 tournament points.
2 times failing 3+ dodge w reroll is killing my offensive drive. AND the freaking black orc caught a bouncing ball. 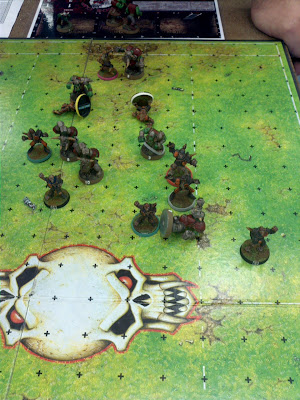 Managed an early TD (turn 3) thanks to Chris' gobbos inability to pick up the ball, tie game! 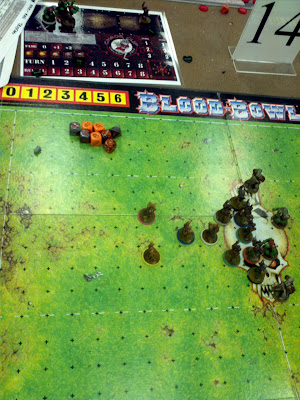 Goddamn gobbo makes up for it by throwing an accurate long pass. Double U Tee Eff!! 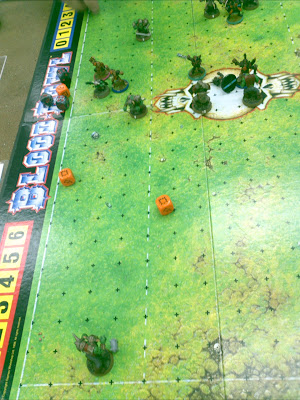 dual posted on GWpertinent
Posted by Tristan M at 04:40