A few years back, while surfing the web, I've stumbled across a few pictures of gladiator miniatures that really caught my attention.
Not only because they were very nice sculpts and paint jobs, but because they represented a historical period I find particularly interesting (after all the Roman Empire did ruled over these Mediterranean European territories for quite a few years).
Anyway, I've started looking for some 'rules' to try to recreate a few of those cinematographic gladiatorial fights, but despite finding literally dozens of them (most of them free), I didn't quite settled for any until a couple of months ago, I noticed a post in Anatoli's Game Room blog reviewing one of the Warhammer Historical rulebooks - Gladiator - .
[Check the review here, and dont miss some very cool paint jobs and articles on the same (and other) themes].
I already had some of their books that I liked so, with the extra incentive of a 50% discount on the book hey were doing by then, I've ordered it and started my own small 'Ludus' (gladiatorial school).

To start with, I already had in the miniature shelf a couple of gladiators from Crusader Miniatures, and as I liked their sculpts so much I've ordered a few different types to join the 'Ludus'.
While I wait for them to arrive and since I was going to start to paint the ones I had, I've decided to convert (and paint) a few Celtic warriors ('friends' for them to practice with), based on the celtic range (plastic sprues) from Warlord Games (really nice cast, resulting in very detailed miniatures).

[Note: Just wanted to add that I find really cool to see relatively small companies (comparing to 'you know who'), produce such cool and detailed miniatures (both in metal and plastic ranges) and dont charge an arm and a leg for them (and no, I'm not endorsed by any of them).]

So here you have both Crusader miniatures, a 'Retiarius' ('net man') and a Laquerarius ('noose man')... 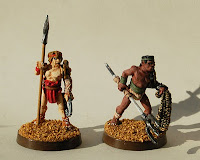 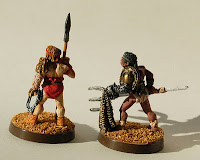 These are the first two Celts.
They are both holding shields and swords, but the 'red bearded' one is wearing a chain mail, which game wise is considered to be heavy armour, turning him into a 'walking tank'! 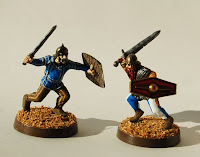 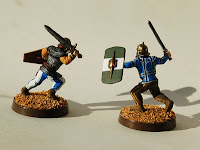 These are the last two Celts.
They are both based on the - Barbarians in the Arena - rules (free pdf available here), and they represent different Celtic tribes/troops, as for example the half-naked tattooed Picts.

Hope you like them.
Cheers!
Posted by Axtklinge at 18:50

I love those gladiators figs and i think they would be cool to play that GW game Pit Fighter.

Do you want my custom made arena? I´ll give it to you for free of course :)

I'm glad you've enjoyed them!
We might try a few games with both rules sets (Gladiator and Pit Fighter), and of course we can use your arena for those games!
I bet it would make a really cool scenario for some top notch pics!
;)

Very nice! I've had a few packs of Gladiators in a box for a while and must get to them one day :-) But first, Blood Bowl!