Converted from Dark Eldar figs...this team took me like 5 or 6 years to assemble...and im not kidding here.These guys were part of the Warhammer 40k starter box...the one that had the DE against the Black Templars.

Anyway,this is just a cheap preview,because i just finish the lineman´s and i had to take a pic of it.
In this pics you cant see the awesome work that Axtklinge did on the assassin and on the runners,so,after i finish gluing those extra spikes,ill take new pics before i prime them.

Until then,here you have 2 crappy pics :P 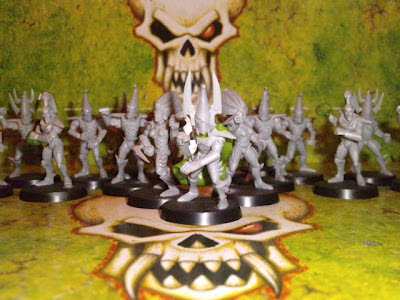 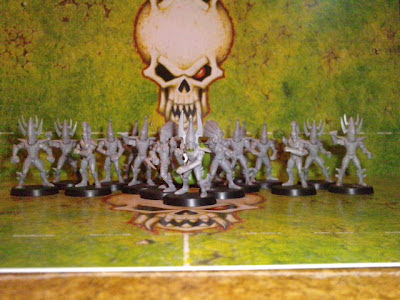 PS I hate playing against Dark Elves and all their stinking 4AG...

I wonder what colours you will paint them :P

I think he was going for a change from his usual Black and Gold.........Gold and Black I believe:D)

Oh yeah, DE on the spotlight!
Keep it going mate!

By the way, I'm glad you liked my small green stuff contributions to the team, but they're far from awesome!
Its a pair of balls and a cape!
(...)
Go ahead and make a joke out of my last sentence! :D

Im still thinking on what im gonna do on them so they dont look so sci-fi...i guess that if i dont concentrate too much on the armour details,they´ll look more blood bowlesque...plus,with the grass and the brown base...well,they might turn in a awesome DE team :)

If you are thinking black & red, you could try something like my spyrers.

They look really awesome and I think will suit the texture of the dark eldar models. You could pick a different wash per model type (green = runner, black = assassin, blue = blitzer, purple = witch, red = lineelf)

plus it is really really fast to do!

Really cool brother,unfortunatly i only have like a half dozen of colours :(

But its awesome,and i would definitly do it if i had the coulours...like you´ve said...its fast ;)

Hey, that's a very cool idea.
And you would only need a colour for each diferent positional.