How about another... Star Player?

And now for something completely new... an Orc Star Player! 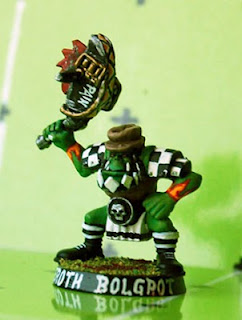 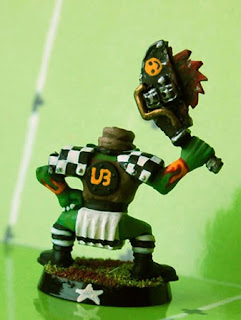 
Yesss, you're right, it is a conversion!
Nothing too fancy, just a 3rd Ed. plastic Orc Lineman from the box, with a couple of plasticard and green stuff mods: Iron Jaw - probably something inspired in 40k universe, and the mandatory chainsaw -fondly nicked 'Pain'.

For those still in doubt (or having trouble reading his name on the base), he'll be filling the role of the Orc Star Ugroth Bolgrot, the orc chainsaw wielding lunatic, that will probably do more psychophysical damage to the opponent coach then to the armour of his players!

Since this season I'm having a go with a Chaos Pact team in my league who knows if it will come handy?
Either that or I really wanted to try checkers in orc armour!

Ive seen this guy yesterday...glad you posted his pic....because i want to do the same with one of my orcs.... :P

:D
I was hoping for a sunny day to have better pics of him, but the weather guy said we'll have rain at least for the next 168 hours, so I've decided those weren't THAT bad.

Wonderful job! Chainsaws indeed really freak people out, especially when you target there high value players like Werewolves or Wardancers

I used a 2nd edition ork goff from an old 40k boxset with a chainsword for mine. LINK

Thanks for your kind comments guys!

@Paul: Yes they do! On a good day they can be devastating, on a bad one we're a player short!
@Tristan: Nice one too, congrats! How about your Doc, is he some sort of 40k orc Dok or a conversion too? Love it!

Yea the apothecary is a 40K ork painboy model or something like that. It's funny how his "serjery nife" is so serrated it could almost be a chainsaw too!

Huuummm...just noticed the arm of the guy...i´ve searched all my spare Orcs and...none of them had a arm like the one you have :(