The Man Cave experience of them anyway...

One of the many events at CANCON is the Australian National Blood Bowl Championships and this year saw 57 coaches enter.  It is progression tournament, starting with 1.0 million gp, playing 7 games over the 3 days and chosen MVP after each match.
Of course, I couldn't enter because we were committed to running our Dark Ages participation game (more to follow on that later).   A few days before hand I got an email inviting me to sit in for a few games so there would be an even number of coaches (and thus nobody would miss out on a game).  Right Stuff was dead keen and took along his new Norse team (in this case named "Thor's Thunderers") for his first ever tournament - indeed his first game of Blood Bowl against anyone but me.  To be honest I was a bit concerned he would be utterly crushed (noting he was at least ten years younger than the next youngest player, and much then that for the majority of coaches)  That didn't turn out to be the case... 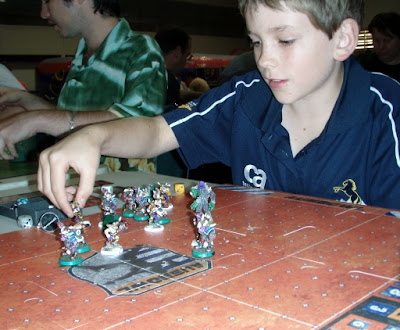 Game 1 vs Matt's Team Carnage (Orcs)
The Lad's face was a picture of concentration as he setup to kick, and he couldn't have had a friendlier opponent then Matt who had a very mentoring approach, offering advise up front.  That naturally started to dry up after Reilly blocked down his ball carrier, snatched up the ball and dodged away to scored the first TD of the game.  Great I thought, at least he wont get smashed without scoring.
Right Stuff went on to hold off the Orc grind for the rest of the half, then received in the second half and went on to score again! Matt squeaked a TD in in the last turn of the game to make it 2:1 TDs and 1:0 casualties to Right Stuff.  A Win to the Lad! Wow I thought, at least he wont be going home having lost all his games...
Game 2 vs Darren's Blu Funda (Orcs)
This game started as a replay of game 1, with Right Stuff up 1 nil at half time.  He got ground away more during the second half though, with his opponent scoring late in the match to tie it up 1 all.  Right Stuff won the casualty battle 2 nil (no deaths).
Game 3 vs Linda's Lady Dwarves (Dwarves)
Hmmm...Dwarves are a difficult for Norse as they do everything the Norse do, but better and tougher.  OK, a loss coming up I though but going home with a 1-1-1 record is a great feat!  He kicked off to the Dwarves, rode out their grind, dove on the ball when the opportunity presented itself and was off like a shot.  Outpacing the stunties and out of rerolls he played it safe and didn't go for it, stopping 1 square short of the end zone when he ran out of MV.  Cue Dwarf lightning bolt - ouch!  Nil all at half time. 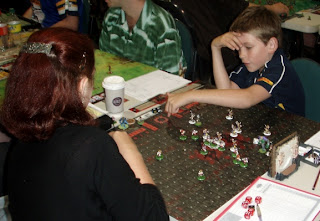 The second half saw Right Stuff receive, get messed up in a scrum around the midline, then manage to dodge out with the ball and shoot through to score.  The last few turns were insufficient for the Dwarves to score and Right Stuff pulled off his second win of the day!  He also inflicted an unbelievable 5 casualties to 2, with each team suffering a death.

Game 4 vs Cody's Barak-Var Sea Dragons (Dwarves)
So Right Stuff started Day 2 with a remarkable 2-1-0 record.  He was up against another Dwarf team, but had less trouble with this one, winning 2 nil and inflicting 2 casualties, receiving one himself. It started off the same as the first two games 1-0 to him at half time and 1 casualtie each. then in the second half Right Stuff scored again quickly and just tried to kill dwarves the rest of the half (he wasn't lucky enough to kill a dwarf but casualized a Runner).
3 wins! I just couldn't believe it!


Game 5 vs Leigh's 'Sinned Bad' (Undead)
For this game Right stuff moved up to table 4 - which meant he was placed 7th or 8th at the time and starting to get some very serious opponents.  Leigh killed one of the Norse Lineman in the first turn, and rubbed salt into the wound by bringing him back as a Zombie.  This really threw Right Stuff and he went after the 'traitor' with a vengeance - charting him twice (he regenerated after the first time).  Headhunting aside, the Undead ground away the first half to be up 1 nil, then Right stuff struck back to tie it up with only a few turns left.  Leigh pulled off some great combo moves to score in the last turn of the second half and take the win 2:1, while the cas score was 4:3 in the Undead's favour and with 1 death apiece. 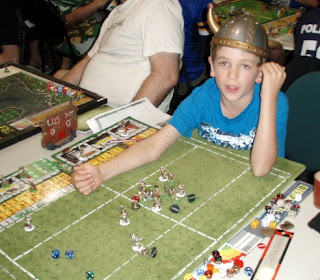 At this point one of the other coaches had to pull out of the tourney and thus Right Stuff wasn't needed as a sub anymore.  He was disappointed over retiring after 5 of the 7 games but his match record was something to really be proud of (I would have been stoked if it was me!) and we bought some Tourney swag to celebrate.  Overall he recorded:

Other highlights of the tourney for us included:
Meeting Paul Deacon, who has been interviewed on a few 3DB podcast episodes.  Here is a picture of his Beast of Nurgle "Jervais Johanssen".
This awesome Chaos Dwarf team, all converted from plastic beastmen, and which won the Conversion Prize 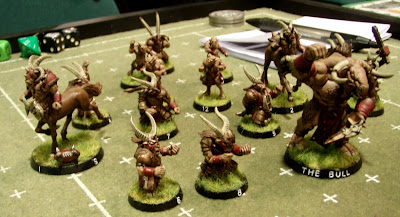 Watching a Halfling coach send a Yeti corwsurfing with one of his little fellows, and follow-up in a later game with an uphill 3 die block on a Troll and charting him!

...and Leigh (from Game 5) showing up on Day 3 with a new zombie fig named Reilly, including a Norse helmet on the base!

I would like to most sincerely thank Gavan the Tourney organiser for giving Right Stuff the opportunity, his opponents for being such great sports, and for everyone there who generated an incredibly friendly and welcoming atmosphere.

(Dual posted from my Blog here: http://tasmancave.blogspot.com.au/2012/01/blood-blowl-australian-national.html)
Posted by Paul O'G at 04:27

Enviar a mensagem por emailDê a sua opinião!Partilhar no TwitterPartilhar no FacebookPartilhar no Pinterest
Labels: blood bowl, paul of the man cave

Great to see Right Stuff doing so well - he'll be beating us all before we know it.

He beats me all the time! Like today in fact...

Very cool report!
Loved how the report builds up tension in anticipation of the results that turn always out to be great for Right Stuff!
That's a pity he couldn't stay in the game to teach a couple more BB lessons!
:)

Sounds like an amazing time, great job Lad! Love the fact Leigh came back with a "right stuff" zombie :)

Woooww...how cool is that.I wish some day i can participate in an event like that.Also,congratulations to Right Stuff,if you keep it like that,no one will beat you when you´re 15...maybe less ;) Also,if you play Fummbl,please avoid me,because i dont need another guy beating the crap out of my teams... *cof* *cof* *Axtklinge* *cof* *cof* :)

AbraxiS- sadly i wont be playing fummbl ... yet

but fuck you! How does a dwarf of shit like you, to play Blood Bowl!