Well, I've hit the big leagues here and no mistake! Some of you may know me from various forums, my own blog, or even, and I hesitate to say it, from a real, actual, tournament. I'd like to think that I'm a reasonable coach, but in all honesty, I spend far more time painting than playing, even with fumbbl just a click away. This is why I wanted to talk to you about brushwork.
As a kid, I loved the Games Workshop games; from Warhammer to Necromunda, from Warmaster to 40k, I had models for everything. I was lured in by the purest gaming crack that is distilled from excellent models, engaging stories and wonderful paint jobs. Over the years, I've tried my hand at more or less everything in that list too. I've scratch built models, written (appalling) fan fiction and ruined more brushes than I care to remember.
But until recently, I was eternally dissatisfied with my achievements.
Predominantly, I would play army scale games but I found that what was in my head could never match what was on the table. If you were to pick up a copy of White Dwarf, you could hardly turn the page without finding gorgeous pictures of lovely, fully painted models. From lowliest trooper to mightiest hero, these would be painted without flaw and, when assembled into an army, they seemed to my adolescent eyes to be pure gaming nirvana; visual perfection. 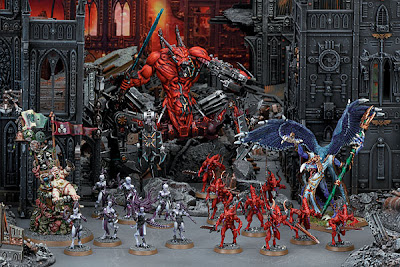 When I looked from the page to my models, assembled on the bare MDF field of battle, I could only be disheartened. My terrain was ugly, my models half painted at best and sometimes (I am ashamed to admit) only partially assembled.
Of course, I was only young at this stage and in the years that followed I longed to play with a fully painted army. Regardless of the game I am playing, whether it is one designed by Games Workshop, Privateer Press or Spartan Games, I have always found it impossible; I have never played a game with a fully painted force.
Now, clearly, this says a lot about me. I am easily distracted and would often start three or four projects in a month. However, the bigger problem, which I have come to realise since I started playing Blood Bowl, is that I am a perfectionist. Everything I paint, I want to paint to the best of my ability.
The chap on the right is Master Tormentor Morghoul of the proud Skorne Empire. He took me about twelve hours to complete. To this day, he remains one of only four models that I have completed for my Hordes warband.
This gentleman took me around seven hours, conversion time included. He is part of my Daemonhunters force for Warhammer 40,000, which unsurprisingly, is not 100% painted.
Army scale games simply do not lend themselves to this sort of painting style. Recently, I started a Tyranid force with upwards of sixty models to convert, prime and paint. At a rough estimate, given my previous track record and allowing myself ten hours a week of hobby time, I shouldn't expect to finish them within the year, by which time, my interest will have waned. To get this army finished, I am having to force myself to paint in a different way; quickly and with short-cuts. These guys will not be painted to the utmost of my ability, but they will be finished.
Blood Bowl is my saviour. The game, I love. The theme, I adore. The range of models is excellent. And the time to finish a team? Next to nothing.
My Harlequins? At least eight hours a model; complete in three months. My Chaos Pact are taking even longer, yet I am confident that they will be finished by May.
This is the moral of my tale. It doesn't matter who you are or what your level of painting skill is; if you're playing one a game with a low model count, you have the time to do your best. You don't need to compromise your abilities as you might with an army scale game.
I'm not saying that you have to spend an inordinate amount of time on a single model, after all, I'm aware that my attitude probably makes me a little strange. Look at it this way, though: if you take your time, spend twice the amount of time on your models than you usually would, not only will they get better and your skills improve, but you'll still be playing with a fully painted team before the army scale gamer has finished priming his army!


P.S. This being Merry Mayhem News, I feel it's my duty to provide you with some form of light entertainment. To that end, I bring you the very best rock band that my home county has to offer.

The article is super cool,but right now,i cant think in anything besides the Wurzels....ohhh...im such a cider drinker....YYEEAAHH.

You need to look into Malifaux Mike.

Simple loved your article.
I find it really interesting to hear other gamers 'inner thoughts' over this converting/ painting/ playing hobby we all share, despite the game system in question.
Dwarf or Norse for a 'Cider drinkers' team name?
;)

I wouldnt say for a Dwarf or Norse...but for a tree lover elf team...weeeellllll ;)

@Thadrin I have a Mallifaux crew, but the game confused me. So much to learn. I loved the card system though.