Nothing like a festive weekend with plenty of 'nothing to do' and a few boring shows on TV, to dig out the paint set!
With the painting mode: ON, and lots of lead begging for ink on the shelves, I've decided to have a go with a couple of Blood Bowl 'Star Players' that will sooner or later be useful in our league games.

The first one is an home made version of the "Slibli" (how silly is that name?) a Saurus Lizardmen Star player with Block, Grab, Guard and Stand Firm. A really nice addition to any new Liz team, specially in a perpetual league such as ours.
The body is from an Warhammer saurus (5th edition box), a head from a more recent sprue, all joined together with some green stuff and a couple of other bits . 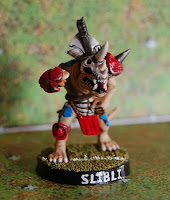 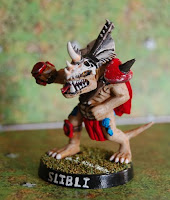 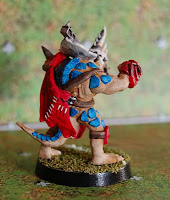 The second star is this stout little guy I had around since ever, that goes by the name of Puggy Baconbreath. Game wise it's quite a tough guy for is size (Block Dodge, Nerves of Steel,...), but like his halfling counterparts (and despite his look), it has an armour made of paper (AV 6)... 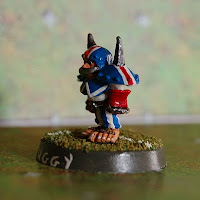 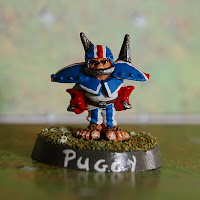 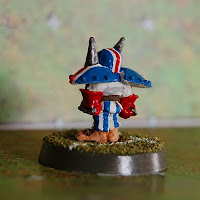 My son has been playing a Lizardmen team in the PC game and loves his Sauri! You've done a great job with this fellow. In fact, I think the GW Lizardman team is pretty shabby now compared to what you can do with the Warhammer figs, as you've just proved! Looking forward to more, as I go off to finish the basing on our latest team -pics to follow! :-)

Yeah, I couldnt agree more on the Liz team from gw. I've been playing a Liz team converted from gw plastics (and a few extras) and they look more powerfull and dynamic that the 'official' ones ever would. Thanks for the compliment and I'll be checking those pics!

Well I just finished the basing tonight so pics up soon!