For the last game I bounced back up to table 13 (possibly an omen) and played against Chad and his Chaos Dwarves (yay, another AV9 team!) who was the third from Rockford (they all had names starting with C strangely enough).

Additionally since it's the Chaos Cup everyone got two free mutations for unskilled 0-12 or 0-16 roster spots, and you got to wait to see who your opponent would be. I debated Claw but had not been throwing many blocks with my Zombies so in the end I plumped for Foul Appearance on both.
Here's his roster
2 Bull Centaurs w Block
2 Chaos Dwarves w Guard
2 Chaos Dwarves w Stand Firm
Chaos Dwarf w Leader
Chaos Dwarf
2 Hobgoblins w Pro
2 Hobgoblins w Extra Arms (his two free mutations)
Below are my tweets from the final game. Chad enjoyed using my pre-registration red dice and they rewarded him! My models refused to stay on the pitch and once knocked out wouldn't come back either! Pipeline had to leave after game five and my joke was he left me with his luck! Also kept joking about hiding the red dice from Chad ;-) Game ended 1-2 loss, 1-3 CAS and earned me 12 tournament points.
Final game, picked foul appearance for my two zombie mutations. 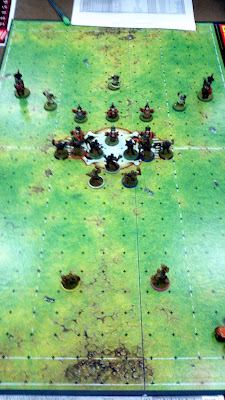 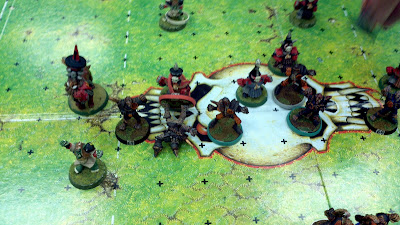 Managed to squirrel my sure hands ghoul down right near his endzone from a tough position. 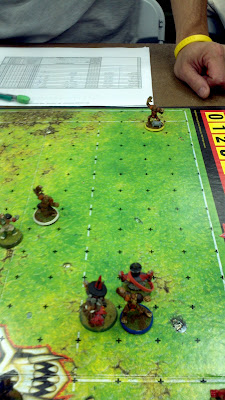 Pretty much best kickoff I could get, ball far in the corner and perfect defence! ** this turned out NOT to be the case as I tried to hold up his Bull Centaurs with my Mummies in the wide zones and ... (see next tweet) ** 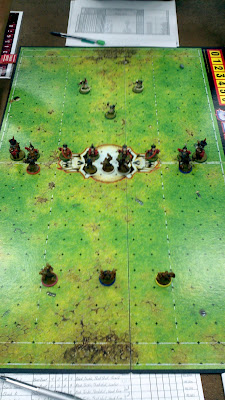 Looking likely the chaos dwarves will tie it up before halftime. BOTH mummies taken out in one turn :-( 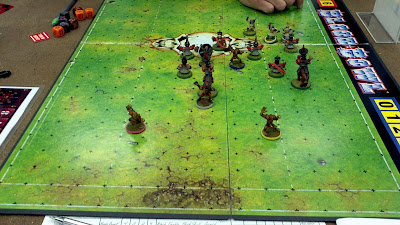 Pulled off a magic move, dodge into 3 tackle zones and uphill blocked the bull centaur down with wrestle. 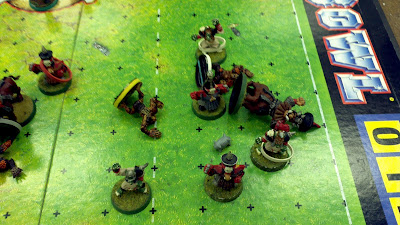 Followed quickly by failing a 3+ dodge with reroll. wah waaaaaaah.

dual posted on GWpertinent
Posted by Tristan M at 05:02